So first off, I want to start you off with the bad news.  We have 16 leagues and – unless commenters are liar, liar pants on fires – they’re all full but for two or three spots as of this typing.  That means we still need to fill a few spots and make some leagues so that you all get your chance at RCL glory and when I say ‘we’ I mean the royal ‘we’ and it really means ‘you’.  Yes, we’re looking for some more commish-type people to stand up and create a league.  Don’t know how to make a league?  Well go back to our start of the 2012 Razzball Football Commenter Leagues and follow the instructions and get yourself set up as a league with us.  We promise we won’t bite…well, we’re no Marv Albert but if you ask nicely we just might for you.  But seriously, start a league; it’s a groovy thing to do.  Don’t worry about people not joining because it’s like Field of Dreams: if you make a league, Razzballers will come.

Alright, the bad news wasn’t so bad so what’s the good news you ask?  Well, besides still getting that sweet RCL Champion Jump Suit from our friends at SayWhat?! Custom Shirts, the good people over at Far Out Awards have decided to step up the winner’s ante by throwing in this beautiful, nay, majestic, nay supercallahoweveryouspellit awesome trophy to the grand prize winner: 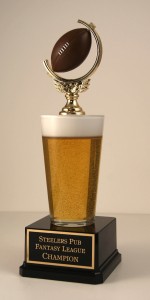 No, you’re not winning a returned trophy from the Steelers Pub League.  We ask that you use your imagination and plug your team name in there and put it over ‘Razzball Commenter League Champion’.  Can you picture it now?  Good!  But do you wanna know the greatest thing about this trophy?  If you’re under 21, you can just tell your Mom it’s a pint of Apple Cider and snicker to yourself.  Oh she won’t believe you, trust me, but you’re gonna have to explain it as best as possible like that one time after watching American Pie and finding that apple pie on the table.  Sorry, don’t have any suggestions on how to explain that one for you but we’re now off course and should be looking back at our 2012 Razzball Football Commenter Leagues link to make a new league so that you can win this thing along with that killer Jump Suit.  Razz on, my people, Razz on!