Welcome to our 2021 NFL Depth Charts page! Designed with fantasy football in mind. Projected role + snap, rush, and target share for this week and rest of season.

What makes the Razzball NFL Depth Charts different than the plethora of other depth charts?

The traditional NFL depth charts layout does not answer most of a fantasy football fan’s questions. We ignored the constraints of the traditional format and built one that we felt answers the questions we want answered when looking at a team depth chart.

So what questions do the Razzball NFL team depth charts aim to answer?

We will combine it into one big question and then we can dig into the details: “What is the projected ROLE of each player right now (aka next game) and for rest of season?”

Did you capitalize ROLE? Is it an anagram of some sort or are you anti-italic/underline when you want to emphasize a word?

I guess the latter? I emphasized role because the roles for the majority of fantasy-relevant positions are more complex than just a simple 1/2/3. There are only a handful of traditional #1 RBs who play 3 downs and the rest of the teams’ have multiple iterations of a job share. Some team’s #3 WRs and #2 TEs get enough playing time to be relevant while others are an afterthought. The same may be the case for a team’s 3rd CB as well as the role of just about every DE/DT/LB.

Can you just boil it down into something simple? Who wants to read a paragraph for every player’s role?

I hear you. For the majority of cases where you need a quick answer, we label a player’s role as follows (designations for all positions unless otherwise noted):

What positions are included?

QB, RB, WR, TE, DL, LB, DB. Offensive linemen and punters don’t matter for fantasy football. (Here are rosters/depth charts if you need Offensive Linemen.) Just not very concerned about Kickers and Return Men. I also don’t really care if a guy is the ‘left’ WR, ‘right’ WR, slot WR, etc – I get it is relevant to some but it adds more complexity than it is worth in my opinion (note: in case it isn’t clear, I am firmly in the “anti-WR/CB matchup camp”. You can hit me up on Twitter @rudygamble if you want to debate that one.)

Going back to your original question, you mentioned ‘current week vs rest of season’. Why is this relevant and how do you balance the two?

In standard NFL depth charts, there is a dilemma for handling short-term issues. For example, Mark Ingram is scheduled to miss the first 4 games of the 2018 season but, most likely, will be in a job share with Kamara when he gets back. Standard NFL depth charts cannot display both relevant pieces of information. Our fantasy football depth charts can. As you can see below, our projection is that Kamara is more of a ‘starter’ in weeks 1-4 (with Ingram marked as ‘Out’) and then a ‘rotation’ back with Ingram after that. 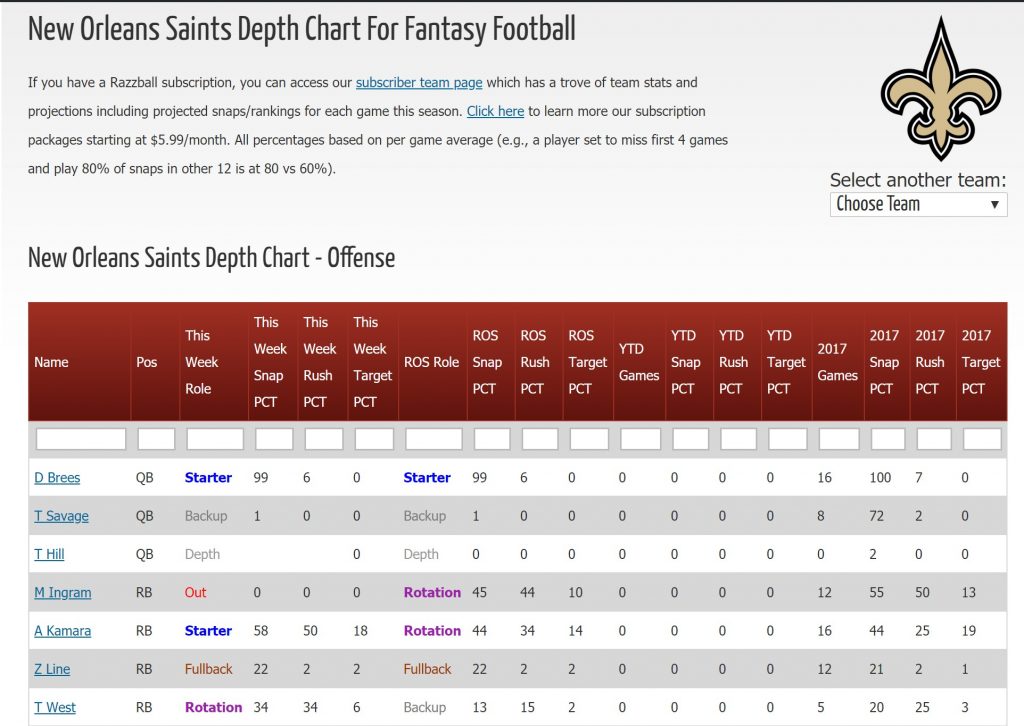 As additional context, we also provide the snap/rush/target percentages for year to date (aka YTD) and for previous year (in this case, 2017).

How do you project snaps/rush/targets?

How do you handle snap/rush/target share for rest of season/year to date/last year when a player missed time?

The snap/rush/target shares only include games in which a player actually played (or is projected to play). This is because the goal of our fantasy football depth charts is to communicate role vs reflect/project overall stats which we do in our projections throughout the site. We added a ‘Games’ column to the Year to Date and Previous Year stats to give a sense for players that missed time.

What are the little boxes under the column headers for?

These allow you to filter the results. They are left/right wildcarded so if you type in “Sta” in the Role column, it will filter to only Starters. You can do an OR by separating words by | – e.g., Starter|Rotation returns both Starters and Rotation players. If you do an OR, you have to exactly match or use * before/after the word like *Star*|*Rota* will return Starter and Rotation players. You can use ! as a NOT so !Depth removes all Depth players.

You can also click the column headers to sort the results. You will need to refresh the page to get it back into the default order.

One other cool trick is that the table headers ‘stick’ to the top of the page when scrolling.

How does it look on Mobile?

It looks good. You can see this week’s stats + ROS role if you hold your phone vertically and everything if you hold it horizontally.

I love it! Last question – how much are you going to charge for your fantasy football depth charts?

It is free. But we recommend signing up for our season-long or DFS package to get the most out of our projection engine (which, btw, finished in the top 5% of both accuracy and uniqueness/boldness in FantasyPros 2017 accuracy contest – note: no other ranker finished in the top 20% on both measures!). These same depth charts are also included in our subscriber-only team pages which have a ton of additional stats/projections.