Greetings! Did you all enjoy that exhilarating Hall of Fame game as much as I did? Landry Jones looks about as valuable as Kim Kardashian before she so eloquently played the meat flute on camera. Seriously, preseason football is harder to watch than that Hulk Hogan sex tape, you know the one where he simultaneously drilled his best friend’s ex-wife AND managed to slip the “N” word out multiple times? Okay, enough about sex tapes. You’re not here to listen to me bash celebrities (or are you?). You’re here to get Beddict’s take on the TE position, a position that I must admit, I’m a little down on this season. Jimmy Graham has been traded away from a high-flying passing attack to a ground-and-pound system that is bound to disappoint. I’d say it’s akin to the falloff from season one of True Detective to season two.

Yes, he should still be a red zone threat and lead the Seahawks in receptions, but Graham is no longer anything resembling a first round selection. We also have former young hog, Julius Thomas leaving Peyton Manning for Blake Bortles, dropping him faster in the rankings than Oprah Winfrey off the high dive. Former freak show Vernon Davis is coming off a pathetically disgusting season and can no longer be counted on as a top-5 option (though I do like him to bounce back to a degree). The ancient Antonio Gates is missing the first four games for roiding up and Charles Clay has left a good situation and landed in one where he’ll be lucky to break 35 catches on the season. Yes, my goodmen, this shizz is all fuzzed up. Go deep into the mind of Beddict in my rankings below, and read about a few players I expect to either blow up or do us dirtier than Chris Farley’s drawls after an all night bender (RIP) and see how it makes you feel. Sexually charged, I hope.

Tight Ends that will Delight: 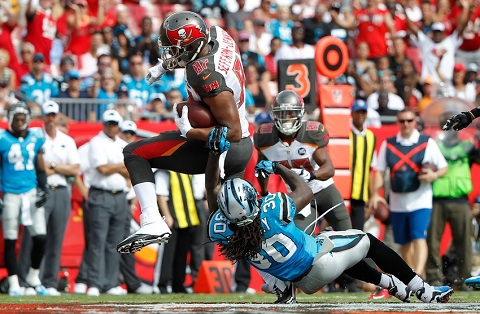 Austin Seferian-Jenkins – Who, oh who, does a rookie quarterback rely on when the going gets rougher than Christian Slater movie critics? How about this 2nd year behemoth ASJ, a University of Washington legend, a man with more length than a half-chubbed Manute Bol. Yes, Jenkins was a disappointment last year, totaling only 21 receptions and two touchdowns but reports are out that the big homey is balling out control right now. TE’s are known to take a huge leap in their second year, and Jenkins is a guy I can see leaping into the top-10 before the season is over, and a player I’d suggest targeting late in the draft if you’re going to wait on the position.

Crockett Gillmore/Maxx Williams – Whoever wins this job is going to put up numbers… Remember it, write it down, take a picture of it. I don’t give a f##k!!! Steve Smith is older than Christ and 1st round pick, Breshad Perriman, is both raw and hampered by an injury. Dennis Pitta may never play again and Joe Flacco has to get elite with someone, don’t he? As you can see, I have Williams ranked much higher as of now, as he’s a touchdown machine with higher upside, but if he struggles in camp and Gillmore seizes the job, I expect the big dog to eat and I will adjust my rankings accordingly. Both of them should end up with solid numbers when the season is finished, as this is definitely one of the more intriguing position battles of the pre-season.

Tight Ends that will Disgrace:

Charles Clay – With Sammy Watkins, Percy Harvin, Robert Woods, and LeSean McCoy in place, when exactly is Clay supposed to get the ball? I suppose one could argue that whoever ends up starting for Buffalo at quarterback will be so pathetic that he’ll be dumping the ball short to his safety net tight end at a high rate but I just don’t envision that happening. All the aforementioned players are studs and there’s simply not enough balls to go around (that’s what she said). You have to be realistic about these things.

Josh Hill – This one that could come back to bite me in the hairy raisin, but from what I’ve seen from Hill in the past, he’s got absolutely nothing on Jimmy Graham. Yes, I’ve read the combine reports, about how Hill actually out-tested Graham in many of the drills, but I’ve also seen the guy play, and Benjamin Watson’s older-than-dirt ass is still listed as the starter. I’m taking a wait-and-see approach and I’m not going to reach just because he’s sliding into Jimmy’s spot. The Saints will definitely be running the ball more, and have added C.J. Spiller to catch balls out of the backfield replacing some of what Graham was able to do. Again, Hill could drop double digit TDs and make me look like a buffoon (It’s happened before) but he likely won’t be on any of my rosters. If he shows out in preseason, I may change my tune. Say one thing for Tehol Beddict,  he’s open minded.

Thank you for joining me for another edition of my pre-season rankings. As per usual, your comments and questions will be responded to in the comment section below. I’m leaving for Canada again, but I should be able to get enough reception to respond. Have a super weekend.