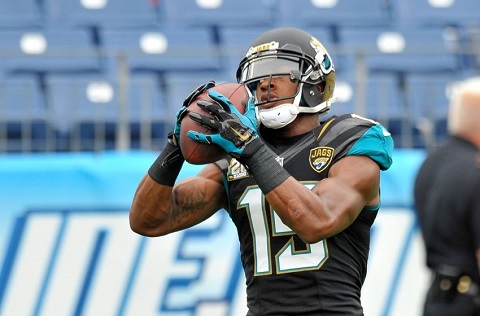 The thing that makes me want a wide receiver more than any other wide receiver is his opportunity to blossom.  What we saw last year from Allen Robinson in the 10 weeks prior to his injury was that he was starting to “get it”.  Granted, “it” has so many different ways to be translated, but for this post, let’s just say it was it from a standpoint of becoming a fantasy relevant player.  Players developing in systems, offensively, are always where I tend to lean when looking for my WR3.  Look no further than the current Jags offense.  It is in year two of the phase, and it hinges on Blake Bortles being able to take that next step as a signal caller.  All signs from the preseason tend to be pointing in that direction. I mean, he doesn’t have to explode into the next elite fantasy quarterback, he just needs to manage the game better and with the developing weapons that are now surrounding him, and I think it’s an inevitability that a star is going to blossom from that.  That person is going to be Allen Robinson.

Despite only playing 11 games last season, Allen Robinson managed 81 targets.  That in itself is good, but let’s look at the passing diversity of the Jags after week 10 and how the numbers he could have had remain true.  The main beneficiary of his injury was Marquis Lee, who himself is already injured this year and looks to be on the outs as a starter with Robinson healthy.  The other main beneficiary is now playing someplace else, him being Cecil Shorts.

What you will notice is that the target totals are extremely healthy.  Granted, he was probably the third option in the passing game behind both Cecil Shorts and Allen Hurns.  So assuming that he would have been starting in Lee’s place and now that Shorts has migrated to Houston, that would be a total of 93 targets to disperse between himself and newly acquired tight end Julius Thomas.  I am not huge into numbers because counting is for squares, but if he becomes the lead dog in an attack, that will be by, all intents and purpose, losing a lot and be forced to throw the ball a ton… how can 140 plus targets not be possible?  As an added bonus, the Jaguars as a team only threw for 14 touchdowns. That is a statistical anomaly and won’t be repeated with the weapons they have added at the tight end and running back positions.

So the outlook for Robinson is a moderate one, meaning that the Jaguars aren’t going to turn heads offensively, and thus are usually shunned come draft time.  With T.J. Yeldon as the threee down back who can move the chains, and King Julius doing his thing down the middle, the outside will open up for Robinson to be an ADP darling.  He is currently being drafted as the 36th WR off the board and 102nd overall.  If he can extroplate on his numbers from last year, he can easily be a top-20 wide out just by the volume and adding to his and the team’s dismal passing and scoring rate.  Projection: 145 targets, 82 receptions, 1010 yards, 5 touchdowns.