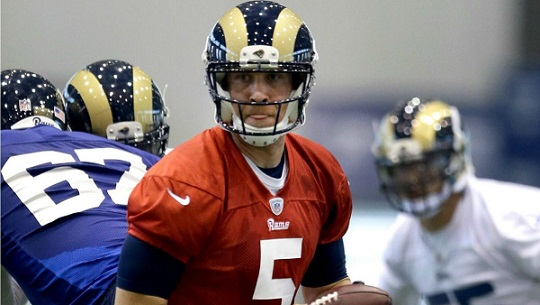 The first guy listed in your lineup is a priority, but not a draft priority for me. I would rather load up on guys at other positions, and my usual draft strategy for taking a second quarterback is matching my WR4 with that QB. The bonus in all of this is that while your WR3 is basically either a sleeper or a questionable guy, he is, after all, your third WR.  So this past few weeks, I’ve done dozens of mocks and research to get me prepped and scrubbed in for the dissection of this year’s upcoming drafts. Thus far, and I may be crazy, but I am falling in love with someone, and I seem to always be netting him at an extreme value (like in the 15th round or later type stuff). His name? Nick Foles. Why Nick Foles you ask? I say, why the heck not? Young blossoming speedy wide receivers, a young, fast, and good pass catching backfield that arguably added the best running back from the draft… Listen, I hear what you’re saying, “Smokey you can’t just say a guy’s name and have all us (and by us, I mean my one reader, thanks mom!) just say sure. We want facts, the goods the extra bacon on the BLT.”  Well patience the bacon is in the microwave and the stats and facts are coming too.

So Nick Foles is my deep QB2 love this year, and I’m buying him more this year as a “team” quarterback than last year.  He isn’t/wasn’t a fit for Chip beef, that’s for sure.  Hence why he is in the ‘Lou. He enters as the Rams unquestionable starter, and yes, Jeff Fisher’s offense is kind of like running through a foam party in Ibiza and not always awesome for fantasy. Til now. Name me a great quarterback that Fisher has actually had that was good for fantasy… Kerry Collins? Vince Young? Ryan Fitzpatrick? It is debatable that the best quarterback he ever coached was Steve McNair, and that was 2006. Year in and year out, he gets also-ran QB’s, yeah, I am looking at you Sam Bradford, and has to make them into something. He now has a guy who can be that good fantasy QB, finally after a decade.

So Foles is a thrower and a volume thrower.  He also is an effective down-the-field passer.  Just two years ago when he bust onto the scene, he had the highest percentage of passes over 20 yards in the league and completed them at a higher rate (45.5%) than names like Romo and Rivers. I understand what we saw last year will give you a horrible taste in your draft mouths, bit it gets better, I promise. He has a receiver core consisting of  Kenny Britt, Brian Quick, Stedman Bailey and Tavon Austin. All meh, but who has ever thrown them ball? Hill and Davis… that is not the downfield throwing tandem I would want leading my recieving core. In Britt, FOles has an over the top medium-to-deep threat who was in the top-12 in yards per reception.  He has an emerging, yet returning from injury, poor man’s Vincent Jackson in Brian Quick. And Quick is the best receiver they have (and he hasn’t even shown it yet). There’s a slot guy in Stedman Bailey, who is primed to be a breakout guy as a safety blanket receiver for Foles. Then you add in all-purpose burner Austin, and that offense sounds young and explosive. I didn’t even add that they have a sexy combo of running backs (Tre Mason and Todd Gurley) that are both grinders and good pass catchers… well, it all leads to positive things when you have an offense that can control the ball.

So I am not saying that the Rams are returning to the “Greatest Show on Turf” type team, but I am saying that they are getting underrated, collectively, as a football team.  If you are looking for a good QB2 and a sleeper who can be a injury/bye week replacement (possibly more), than I ask you… why not Nick Foles?  He is going off the board as the 22nd QB selected, and the WR/QB pairing of Quick and Foles sounds tasty, if not a something that could blossom into something fantasy roster worthy.