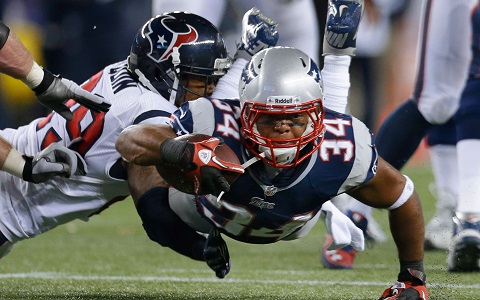 While I could just copy and paste “Bill Belichick is no longer his coach” say, about 323 times and feel pretty confident about relaying substantial and relevent thoughts on why Shane Vereen is going into the season underrated, I wanted to be better than that. OR I just didn’t want the Razzball front page filled with a plethora of Bill Belichick. Mmm, plethora. That being said, while it’s easy to chaulk up Vereen’s ineffectiveness solely on the fact that the most jolly (and quite the partier) coach in the NFL trolls the running back position like no other, there are also some other factors playing into why Vereen might be a sneaky good pick up. Some might say he’s a sleeper, but I’m pretty sure everyone knows who he is, nor is he sleepy (I think? One can never be sure of another person’s sleep patterns). But underrated? Most definitely…

Obviously, both seasons are very similar, save for major fact that he played in eight less games in 2013. That in of itself essentially shows the curiously odd way he was used this past year. While he wasn’t the only running back on the Patriots that gave us fantasy fits (ahem, Jonas Gray), moving to the Giants could represent a boon to his current value. Again, the Belichick point made earlier is certainly the main crux, and requires little analyzation, but going specifically to the Giants is also a big win here and shouldn’t swept under the rug. While it’s true that his exact role with Vereen’s new team is ambiguous, I think we can take the leap and call him a versatile pass-catching back that is a check-down threat. Yes, I do have my Captain Obvious hat on.

Rashad Jennings and Andre Williams are the heavy lifters on the depth chart and it’s no secret that Tom Coughlin prefers multiple backs getting the bulk of work, but it should be noted that Williams averaged just under half a catch per season in the ACC, and ended last year with 18 receptions for 130 yards. They aren’t afraid of throwing, and that’s where Vereen’s value can shine. Jennings is an above pass-catcher, for sure, but he has his own health issues. And say what you want about Eli Manning (I’ve said everything), but he certainly runs a pass-first offense for Ben McAdoo, and signing one of the NFL’s best receiving threats in the backfield is telling.

And speaking of McAdoo, this will be Manning’s second season under the system, including a healthy (maybe?) Victor Cruz and a full season of Odell Beckham. In some cases you might worry about where the volume of production will go. Here? This situation can only help Vereen, in that, all these offensive principles will create more space and take attention from the other team’s defenses, and this is where a pass-catching running back, especially one with Vereen’s ability, can shine.