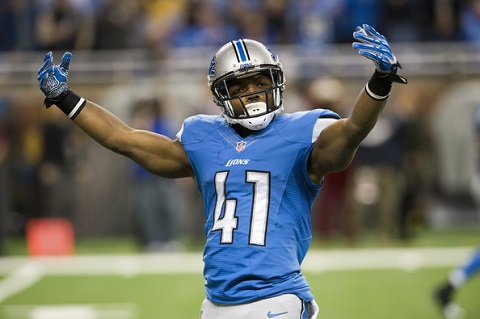 Drafted in 2013 out of Notre Dame, Riddick is known as a “slasher” (why have I never used this description with Frank Gore? The puns are endless…) with good speed in the open-field. He has above average vision with good hands, but he does lack size and is not your prototypical halfback. In fact, during his sophomore and junior seasons, he was used as a slot receiver. While not seeing much time in 2013, he did inherhit a larger role in 2014.

Obviously, the larger role Riddick had was still forgettable from a fantasy aspect, and, at best last season, he was a bye-week pick-up if you were desperate or in anything bigger than 12-team leagues, but in terms of what makes him underrated this upcoming year, you have to look at the games and his production when Reggie Bush was out for one of his normal 153 ailments. Take a look…

So he was essentially what Reggie Bush was supposed to be when Bush wasn’t in the lineup. Granted, Riddicks value is probably geared a bit more towards PPR leagues, but don’t let that take away from the fact that production is production. And what I mean by that redundant and useless phrase is that both Shane Vereen (during the times when Bill Belichick wasn’t trolling the fantasy population), Danny Woodhead, and even Darren Sproles were considered solid flex plays and most certainly rosterable on your bench. And there’s no reason why Theo Riddick can’t be either.