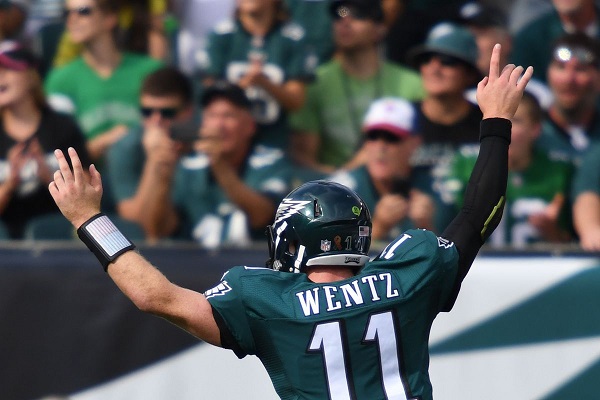 Welcome to my weekly rankings post! We are going to be positive this week. Last week we went over this season’s biggest disappointments and this week I’m going to write about a few players who are performing pretty well so far this year. Also my rankings for Week 8 can be found below.

Carson Wentz – In the past three weeks, Wentz has thrown 11 touchdowns. On top of that, he piling up rushing yards as well. On Monday night, Carson ran for 68 yards on top of a 4 touchdown day. I’ve been saying that Wentz is a QB1 for a while, he might even be a top 5 quarterback for the rest of the season. Wentz has a fantastic match up against the 49ers this upcoming week.

Mark Ingram – Mark Ingram plays a tough Bears front seven this week. I think that he’ll be able to overcome this obstacle based on the Bears having to plan for the passing attack of one Drew Brees. Even for an improving defense, a trip to New Orleans isn’t desirable for anyone. Mark Ingram is starting to get the workload of an every down back while at the same time sharing carries with Alvin Kamara. In the past two weeks while going over 100 yards in each game and scoring, Ingram has combined for over 50 touches.

Adam Thielen – Although he is yet to find the end zone this year, Thielen has at least 5 catches in every game, making him worthy of starting spot in most PPR leagues. This week against Cleveland is a fantastic match up, even with Case Keenum still under center. This will be his best chance so far this season to find pay dirt.

Austin Seferian-Jenkins – ASJ was suspended for the first two games of the season but he has hit the ground running since his week 3 return. In the past three weeks, Austin Seferian-Jenkins has scored a touch down in each of the past 3 games and I assume that this trend continues against the Atlanta Falcons in Week 8. I predict that there is going to be some scoring in this game so look out for McCown’s favorite red zone target.