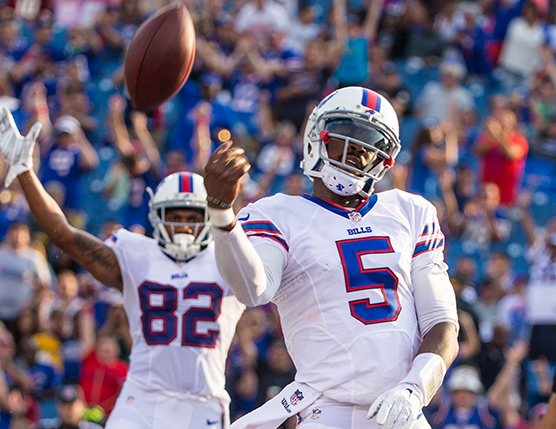 Hello everyone, and welcome to another Wednesday, Rankings Day! Hopefully you guys had a great Week 7 filled with fantasy goodness, food, family and most importantly, our articles and projections. It’s crazy to think we are almost at the halfway point of the NFL season, but I just wanted to let you guys know how much we appreciate your readership. I really do love it when you guys love what we do!

Taylor had a pretty decent week against Tampa Bay, finishing with 268 yards and a touchdown, but now I’m back on the hype train for this week’s matchup against Oakland. The Raiders secondary has been struggling, with Alex Smith just recently lighting them up for 342 yards and three scores on Thursday Night Football. Granted, they do get some extra rest and prep against this Bills offense, but the pieces are there for Taylor to have a nice game, especially now with Jordan Matthews back in this offense.

Ever since Bill Lazor took over as the OC, this offense has been performing better, with Dalton playing pretty well over the past couple of weeks against Cleveland, Buffalo and Pittsburgh. Although the INT total is a bit high for my liking, I really do like Dalton this week as a streaming option against the terrible Colts defense that ranks as the 30th-best defense against the pass according to Football Outsiders, giving up nearly 22 fantasy points per game to the QB position.

The Saints haven’t been so hot against the run, giving up 131 rushing yards last week to Aaron Jones, ranking 29th against the run according to Football Outsiders, and give up nearly 25 pts per game to the position. Howard is an incredible bell cow due to the fact that John Fox won’t let Trubisky throw it very often. I am loving Howard this week against the Saints with a huge workload coming to him.

At home as a large favorite against a weak team, everything is pointing to Mixon for having a good game this week. Only the 49ers give up more production to the running back position this season than the Colts, and Mixon should be in line for a nice stat-line when everything is said and done. He hasn’t been producing as much as we would like through seven weeks, but you have to love the matchup in Week 8

I understand he’s been very disappointing to this point, but this offense is firing on all cylinders and against the very weak 49ers defense, it’s the perfect opportunity to buy low on Jeffrey if you don’t have him, and if you do, put your faith in him one last time. If it can’t happen against the Niners, it’s likely not going to happen this year.

Against the 32nd ranked pass defense according to Football Outsiders, this is a prime spot for Funchess and Benjamin. Razzball is pretty high on Funchess this week as he’s in the Top 10 in our WR rankings. Funchess is a great start this week against the Bucs.

The Browns are struggling against opposing TE’s this year, and Rudolph, if he’s available in your league or otherwise, is a great start this week against Cleveland.

Players I’m Not High On

A lot of people are convinced Rivers is a great candidate this week against the Patriots, but I’m not one of them. I talked about this on the podcast and it turned out to be true, but I think Belichick knows how bad his defense is, and won’t continue to sell them out like they have been all season, up until Sunday night. I really do believe their new gameplan on the defensive side of things is to control the clock on offense, slowly pounding the football with Dion Lewis or whoever it will be in the week, and not allowing the opposing offenses on the field. This is a trap game for Rivers. I would much rather have other QB’s on my team this week

Ajayi has been very frustrating as of late, this offense may struggle a bit under Moore, and on a short week against a pretty good Ravens front seven, I don’t want anything to do with Jay Ajayi this week.

The Broncos CB’s have regressed a bit, but it’s still a pretty tough matchup for Hill and the rest of this offense. If you can find another option, I think you should try to leave Hill on the bench.

Alright guys, that about does it for me. Again, my apologies for having to publish this on Thursday morning As always, leave your questions and comments below and I will answer them in a timely manner.  Take it easy.