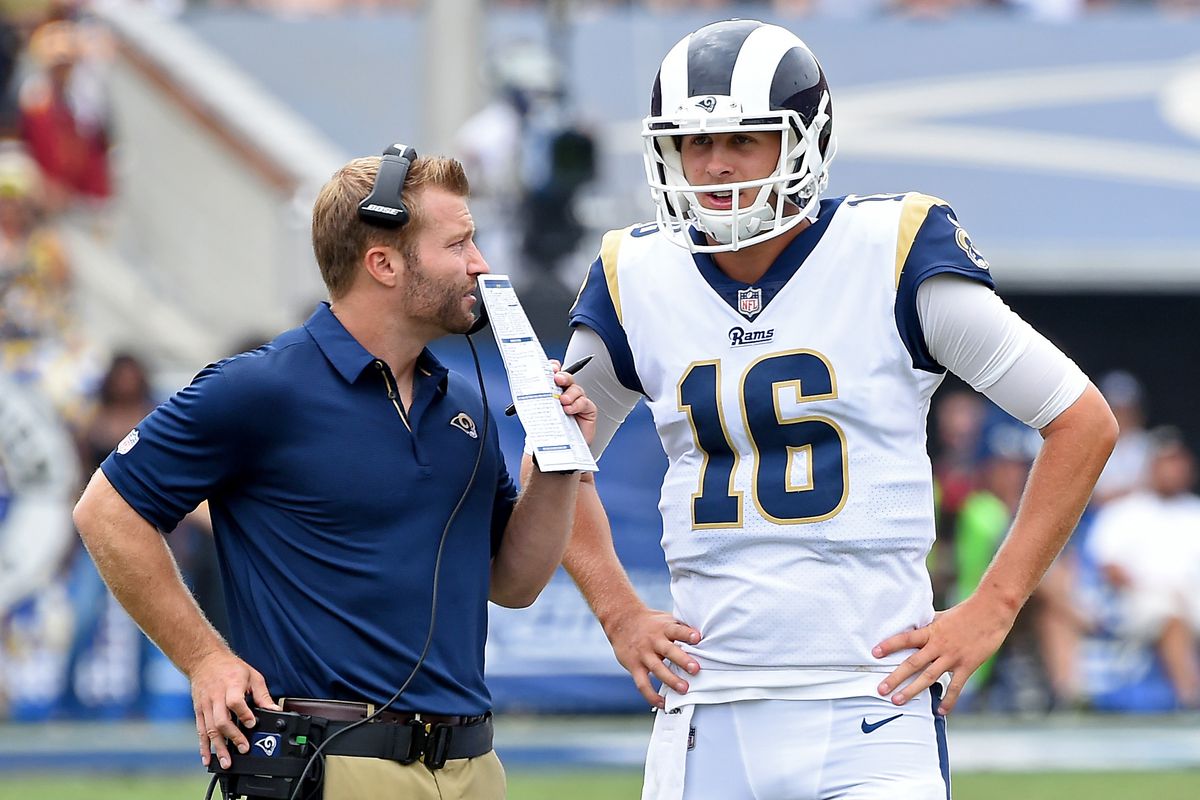 What’s going on guys, and welcome to the first part in my Sleepers, Breakouts and Busts series, where today, I’ll be taking a look at the Quarterback Position and talking about some names to keep an eye on in the 2018 season.

It’s almost August, which is very exciting as the Hall of Fame Game is just around the corner, which means that the rest of the preseason is soon to follow, and the regular season moves closer towards us as well.

Over the next few weeks, I’ll be sure to publish the rest of the posts in this series, as well as any major breaking news updates, updated rankings, my July ADP review, advanced player/team previews, and even more strategy pieces. It’s going to be a great month!

*Note* – The following ADP data is from 4for4.com, and corresponds with 12-team standard leagues

So before I begin with both Manning and Dalton, I probably won’t be adding a section for each position called “Deep Sleepers” except for Quarterbacks. There are so many QB’s that I absolutely adore for this season, so I need to talk about every single one, especially those that can be found in the last few rounds of the drafts. Andy Dalton and Eli Manning both fall into these categories.

Speaking of Manning, these past few years have been very rough for him. Factor in that all of his receivers have never really been healthy, and a couple rough years with the incompetent Ben McAdoo, and it’s been a couple of seasons to forget for the 37 year-old QB. However, this year should be different. He’ll get all of his weapons back fully healthy, in addition to Saquon Barkley, who will definitely take some pressure off of the QB, and a new HC in Pat Shurmur, who transformed Case Keenum into an efficient QB last year. Hey, if it worked for Keenum, who says it won’t work with Eli? With a price in the 15th round, Manning is a high-upside QB2 that could pay dividends if your main QB went down with an injury, or just flat out stunk (see “Busts” below)

As the days go by, I start to have more and more interest in drafting Dalton as my QB2 with the final few picks of the draft. In my opinion, Dalton has the upside to finish inside the Top 12.

After a horrible first two weeks with Offensive Coordinator Ken Zampese last year, Dalton and the rest of the Bengals offense struggled greatly, as they failed to score a single time. However, things slowly picked up under new OC Bill Lazor as Dalton ended up throwing for 3,300 yards and 25 TD’s from that point on, and finished

Heading into 2018, however, I’m confident in Dalton’s upside. He’ll have another season to get fully accustomed to Bill Lazor’s system, a fully healthy O-Line, Tyler Eifert off the PUP list, and a full season with all of his dudes: A.J. Green, Tyler Boyd, and 2016 first-round draft pick, John Ross.

Dalton will cost you a 16th round draft pick, and for that price, the upside is too good to pass him up.

I’ve spoken about Mariota time and time again, as he is turning into my favorite late-round target out of all of them (except for maybe Matty Ice).

Mobile QB’s are something special in fantasy football, and Mariota checks off that box. While he hasn’t been as mobile as other QB’s have been, like Russell Wilson or Cam Newton, that’s sure to rise after the shakeup of the Titans coaching staff over the offseason, which is absolutely crucial to Mariota’s fantasy stock. Well, the Titans have brought in HC Mike Vrabel, and OC Matt LaFleur, formerly of the Rams. Finally, gone are the days of the “exotic smashmouth” offense, as this coaching staff should work towards Mariota’s strengths as a mobile gunslinger.

He’s still got some very dependable weapons in Rishard Matthews, Corey Davis, Delanie Walker and Dion Lewis out of the backfield, and with the new offensive schemes and designs that should maximize Mariota’s upside for 2018, I’ll gladly spend an 11th-round pick on the 24 year-old QB. 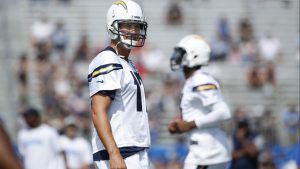 Depsite the loss of Hunter Henry, Rivers remains a favorite late-round target of mine. Rivers has been one of the most consistent fantasy QB’s to date, as in the past 3 out of 4 seasons, Rivers has finished inside of the Top-12, yet he is still being drafted in the later rounds of fantasy drafts.

If the former 2017 1st-round pick of Mike Williams can come to fruition, the Chargers will still have a talented group of receivers, as Rivers will have the option of throwing it to Keenan Allen, Williams, Tyrell Williams or Travis Benjamin. Throw in a balanced and efficient run game, Rivers shouldn’t have to worry about carrying the Chargers by himself, and I think should pose enough upside to carry fantasy rosters in 2018.

After a rough rookie campaign, Goff excelled in his second year under new HC Sean McVay, and ended up with the 12th-most fantasy points/game. Overall, it helped that he had the best running back in the game last season, and Gurley’s dominance should continue, which unfortunately means that Goff’s passing attempts per game won’t increase too much. However, there’s still reasons to target him in drafts.

First off, he still carries a price tag in the 10th round, so it won’t cost you an arm and a leg to get him. Second, he still has an excellent receiving corps with Cooper Kupp, Robert Woods, and newly-added Brandin Cooks. While the Rams won’t force him to throw the ball 40+ times a game, he definitely has the weapons to get his TD rate up.

After an efficient 2017 season, he shouldn’t have many issues playing even better in 2018.

For me, drafting a QB in the 6th round is pretty early, so if I do take a QB early, it’s going to only be for either Brees in the 8th, or Newton in the 6th. Simply stated, if I had to put money on any QB finishing inside of the Top 5 in fantasy outside of Brady or Rodgers, I’d put it on Newton, as in 5 out of the past 7 seasons, he’s finished inside that range.

Remember the days where I really did believe that Cam would transition to a pocket-passer QB due to his multiple concussions? Well, that hasn’t been the case, as Ron Rivera seemed to let Cam run wild last year, as he totaled a career-high 139 rushing attempts. Well like I stated with Mariota above, it’s common knowledge that dual-threat QB’s are absolute money in fantasy, and Cam is no different. While it may be hard for Newton to repeat his 2017 season, as he finished 2nd in fantasy with 3,300 passing yards, 22 TD’s, and 6 rushing TD’s, this year he’ll get a revamped O-Line, a full season of Greg Olsen, and a new offensive weapon in D.J. Moore, the rookie wideout from Maryland. What’s not to love? His current ADP  is currently in the late 6th round, but I believe that he could slip even further in casual leagues.

Cousins has been a fantasy darling these past couple of years, thanks in most part from his ability to run the ball when he needs to, totaling 13 rushing TD’s in his career. Our boy Kirk has finished in the Top 10 of all fantasy QB’s in the past three seasons, and with his move to Minnesota, there is no reason to shy away from him.

Instead of throwing to Terrelle Pryor, Josh Doctson, an often-injured Jordan Reed, and the ghost of Ryan Grant, Cousins now has immediate upgrades at each position, as he’ll have his choice of throwing to Adam Theilen, Stefon Diggs or Kyle Rudolph. He’ll also get a highly-improved offensive line compared to the beatings he received behind the Redskins O-Line.

If he can put up Top-10 numbers in Washington, I don’t think we should doubt his ability to put up some serious numbers in Minnesota, and a price tag in the 7th-round should be viewed as a crazy-discount to where he’ll end up when it’s all said and done.

I’ve spoken a lot about my excitement for Matt Ryan, and I’ll repeat myself as much as I have to: Matt Ryan should have the biggest bounce-back fantasy production of any QB this year, and should easily finish inside the Top-12.

Last year was a big bummer for Ryan, as just after a career year in 2016, he finished as the 15th-best QB in fantasy. As I spoke about in this article, Ryan did everything right in 2017, except for score TD’s. But it was still good to see that he did very well when taking a look at his accuracy, yards/attempt, and completion rate. The TD’s will regress back for Ryan, as he should still be able to produce, and continue learning and getting better in his 2nd year under Sarkisian.

While I don’t believe Watson or Wilson should have awful years per se, I just don’t see myself taking them at their current prices, and I wouldn’t advise that others do so.

It goes without saying that Watson was on a historic pace through the first couple games of the 2017 season before his devastating knee injury. However, Watson’s ADP over the offseason reflects that of a QB that played a full 16-game season. There’s a lot of unknowns in Watson’s fantasy stock in 2018 due to his shortened 2017 season, and I’m not ready to commit to the 2nd-year QB with a 5th-round draft pick. Personally, it’s way to high for me, especially when you consider that the Texans defense should be greatly improved.

The same thing applies to Russell Wilson. I don’t feel great about his offensive line and the departures of both Jimmy Graham and Paul Richardson. His current ADP is in the beginning of the 5th round, though I’ve seen him go in the 4th in many mock drafts and some of my more casual leagues, and personally, that’s a little too rich for my blood. I understand the lack of talent on the other side of the ball should elevate Wilson’s passing attempts, but they did invest quite a bit in Rashaad Penny, who should take away some production.

Don’t get me wrong, I still think Wilson is a great talent at the QB position, both in real life and fantasy, but I don’t see myself spending a 5th-round pick on him, so I’ll likely stay away.

Alright guys, that is my time for today. Thank you so much for reading, and I will see you all for the next installments of this series, but for HB’s, WR’s and TE’s! And as always, if you have a question or comment, do not hesitate to leave one below!