EAGLES BORN OUT OF THUNDER

Tonight’s game is kinda of a matchup between teams that are sorta-kinda similar, but not. How informative! Yes, you could say that about every team in the league… Look! One has football players, but they are all different! But to get away from the meta-conversation, both these teams came into the season full of mediocrity and low expectations. While we’re only in Week 2 (about on our way to Week 3, granted), the Eagles and Bears seem to be travelling in very different directions from their shared starting points. Carson Wentz had a successful debut against the Browns (alright, you’re right, it is the Browns), but Ryan Mathews made it to Week 2 without a season-ending injury, and Jordan Matthews looks pretty good. (Against the Browns…) The Bears on the other hand… Jay Cutler did Jay Cutler things, and the running game was astoundingly meh. So are the Eagles a potential playoff team with the Bears destined to once again be a doormat for the NFC North? It’s quite obviously too early to tell, but depending on how the game goes, both, none, and either could be the case after tonight. Well… maybe not either.

1 – Victories by opposing rookie quarterbacks at Soldier Field since 2001 (Seattle’s Russell Wilson in 2012) in 10 starts against Chicago.

26.3 – Yards per reception for Alshon Jeffery in the season opener versus Houston.

26.3 – The number of cigarettes Jay Cutler smokes at halftime.

Take one sip of your drink if… 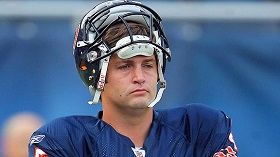 Ryan Mathews does something stupid.

You get really confused why they keep showing this old white guy on the sideline, then remember Lovie Smith isn’t the coach anymore.

You see Mike Ditka (in any shape and form. This includes any Ditka masks or even fans who dress up as Ditka.)

Eagles – 24 (The amount of season-ending injuries Ryan Mathews has experienced.)