“You wouldn’t have liked me when I was younger.” It’s a phrase I taught myself to say as I made it through my 20s in Midwest America, riding my bike across Ames, IA, where I was a graduate student in History at Iowa State University. I later moved to Japan, meeting Anglophones from around the world as we taught English in stuffy community centers and schools without HVAC systems. I made friends and they came and went as friends do, the transitory social graces of living without living in a specific place. You make friends long enough to sleep on their couch or their floor or hope they don’t steal your stuff while you’re sharing space on the floor of a ferry between Osaka and Takamatsu. I came back to the States and researched and worked at the University of Minnesota, developing the odd bonds that scholars do: that trust of leaving out on a soggy bar table the archival material you spent months searching archives for and tens of thousands of dollars in transportation fees and visas to acquire, hoping your colleague won’t spill a lager over your papers, or heavens forbid, your laptop that you haven’t backed up in a year. But oddly enough, the friends who I trusted the most and talked to the most, were the home league players from my ESPN and Yahoo leagues, tracked down in 2007 in some poorly run message board. We called. We texted. We met up. Some of them helped out in Tout Wars. Some wrote for KFFL. Some stole your money and you didn’t talk to them again. I didn’t care if I got scammed out of $15 at the local restaurant trying some gimmick food that tasted like greased bike wheels, I’d still go back and try the black garlic truffle fries. But if you stole the pot money  — no not that kind of pot; I’m talking about the league pot — hoo, there was a special place in Hades for that guy.

But along the way — from Minneapolis to Ames to Takamatsu and back to Minneapolis — I learned the most valuable lesson in playing fantasy sports: thinking differently. And, actually, I didn’t have to learn it. What I had to do, actually, was unlearn what society had taught me. Turns out, fantasy sports was all about mindfulness.

I got familiar with telling people “you wouldn’t have liked me when I was younger” because when I was 23 — fresh out of undergrad but still not knowing who I actually was — I got into meditation. I still have the books about contemplating your death, thinking about impermanence, and the transience of the world. And meditation and mindfulness helped me be a better human out in the world. But, after a few years, I stopped “showing up” for mindfulness. I was consumed in research. I read entire academic books in 2 hours; wrote 5+ page reports on them in another hour. I cut off most of my friends in real life. Sure, I had coffee friends and school friends and fantasy sports friends and that kind of stuff, but for the most part, I reveled in my ability to churn out data at a fantastic rate. I learned Japanese. I researched in Japanese historical archives. I wrote 400 pages on Japanese baseball using Japanese sources as my foundation. All the while, I raised 3 kids, had a house, got married, had a bunch of other things. Oh, and my mom died from a horrible chronic disease. After her death, I took one day off of teaching and was back in the classroom and research rooms the day after. I didn’t understand why I shouldn’t be reading more, or processing more data, or churning more documents, or expounding more.

Sounds like I think differently, right? Turns out, it was all-natural. I discovered this past spring that I’m autistic. I’m in great company: Elon Musk, Anthony Hopkins, Dan Akroyd, David Byrne — all autistic. Autistic people aren’t great at social cues. In fact, our default setting is “no expectations.” Unless we trust you, autistic people will “mask” their way through social interactions with you. We naturally have a limited ability to understand what you want us to do in a social setting. I remember my chronically ill mom’s beloved African Grey parrot being put to sleep; as my family cried along with her in the vet’s office, the vet looked at me and asked if I was OK. I was completely stoic; “The Universal,” a song by Blur, went through my head constantly. I nodded that I was fine. I knew why everybody else was crying. But me? My emotions were in the form of a song in my head. Autistic people love data. Autistic people love research. We also have (generally speaking) no expectations. Especially in my corner of the autism neurotypology, we are keenly aware of social pressure and marketing. Why do you think Sir Anthony Hopkins is such a great actor? He’s a phenomenal mimic; a method actor extraordinaire. He’s a tabula rasa awaiting a character to be implanted upon it.

Data. Research. Expectations. Suddenly, you’ve got the pathway to succeeding at fantasy sports. Are you ready to think differently?

The Hidden Rules of the Game

By now, you might be asking yourself, “EWB, why aren’t you putting a bunch of data up here? Why aren’t you giving me a player to fade?” Well, that’s because those things are great, and Rudy’s already done that for you in his rankings. What he hasn’t done for you — and what the value of the writers on this site bring to you — is how to think differently. Don’t trust me? That’s fine. I have trouble trusting myself sometimes. Then how about we break down award-winning fantasy sports / gambling Olympian Jonathan Bales’ recommendations?

Jonathan Bales is a co-founder of FantasyLabs, a frequent writer for DraftKings and other fantasy sites, and has published several books on fantasy sports. Last October, Bales wrote a blog in his substack about how to win games, whether they be fantasy sports, free throw contests, pushup contests, tennis contests, or rock-paper-scissors contests. If you read the above section, you can probably surmise that “Yes, Blair has read enough of Jonathan Bales to summarize everything for you.” And the takeaway is this: yes, data and knowing the rules of the game are important. But that’s only the first stage of the battle. The winners focus on magnitude of the win, and they win via thorough non-data examinations of the social aspects of the game. Bales calls this the “hidden rules of the game.”

Here’s a quick summary of Bales’ article that he provides: 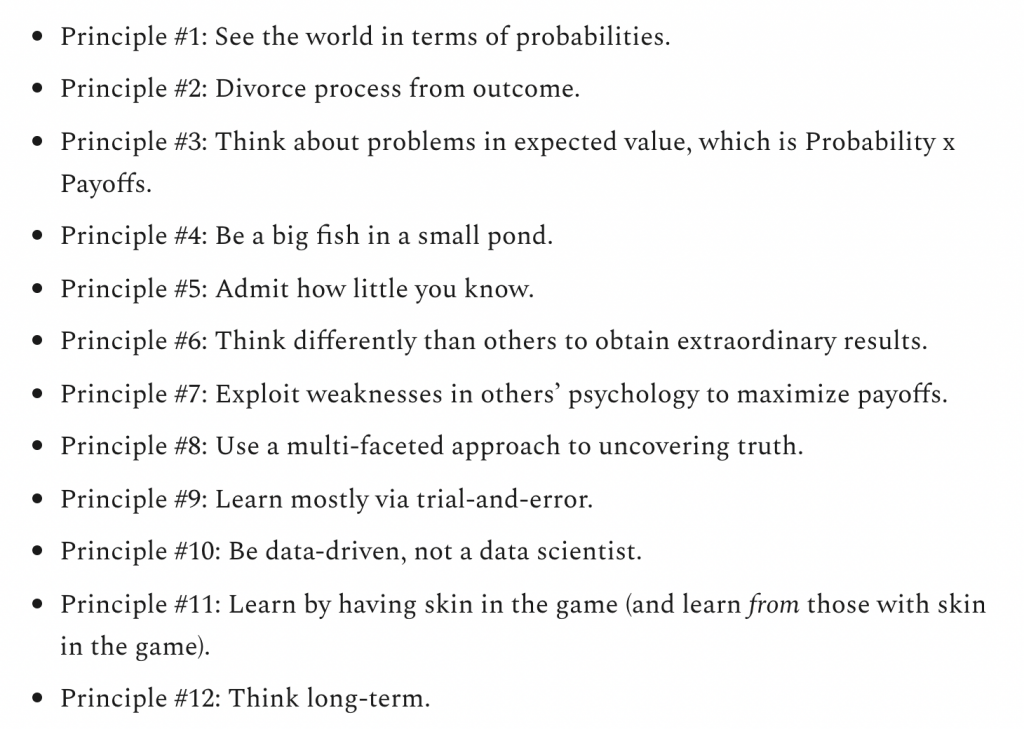 Now, instead of detailing every principle, let’s think differently and categorize the principles. We don’t need to over-state this; general categories and overlap are fine.

Wow! It’s like data is just one factor in a continuum of factors that are important to fantasy sports. In fact, Bales contends that you should be spending the majority of your time developing your process by understanding the social processes of how other people expect you to play and then finding your own path towards greatness. Data is the key, but your process is the vehicle.

Process is the Vehicle

Let’s examine some of Bales’ principles for winning games:

Bales: “One way to get started on the right track is to work backwards. If you’re going to win a specific game, what sorts of things need to happen? What does the path to success look like? If you put a little thought into possible end-games, you can sometimes reverse-engineer a formidable plan-of-attack by working within the rules to eliminate potential scenarios that don’t lead to favorable outcomes for you.”

Bales: “The hidden rules of any game can be discovered by thinking outside-the-box, working backwards from success and considering what sorts of decisions tend to lead there or theoretically increase EV and win/success probability…It’s worth pointing out here that an almost necessary consequence of playing games through the lens of hidden rules is that your approach will be contrarian, viewed as unorthodox and, very often, foolish by the majority of your peers. And guess what? Sometimes, your methods will be foolish. That’s a pill you’re going to have to swallow.”

I’m going to break out here and say it clearly: thinking differently results in pushback. This is where mindfulness is key. You can’t expect good outcomes every time. Even the greatest players lose. OK, Floyd Mayweather didn’t lose. But we’re not playing a game in a one-on-one combat sport; we’re looking at 50+ players crashing into each other for an hour on a field where all sorts of things can go wrong. And that’s OK. Nobody can predict the future perfectly. But you can organize your processes such that you’re more likely to win big games. Nobody will remember if you have a 10-2 regular season fantasy record if you lose to the 8-8 team that eeked into the playoffs but had all their players hot at the same time. Who walks away with the trophy in that situation? The fantasy manager that found the hidden rules wins, right?

So yeah, you probably wouldn’t have liked me when I was younger. I thought differently. I won a lot of games. I thought it was some sort of superiority complex. In reality, it was just me not knowing who I actually was. So I fixed my process. I got mindful of myself, and mindful of my games. I love research. But the social engineering behind the games is really where you need to focus to succeed in fantasy sports. So, the next step is to start unlearning, and thinking differently, and being OK with being unorthodox. Elon Musk. Anthony Hopkins. David Byrne. None of them are “normative,” at least not in “normative” society. But if you’re willing to think differently, to suspend expectations, and to work on your process as a complement to your data, then there’s no stopping you. Whether it be fantasy sports, or games, or life: the future is in your hands.