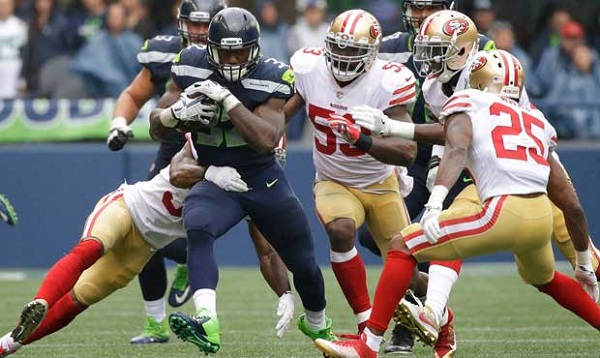 Chris Carson ($25) – The savviest of you (take the compliment!) added him for next to nothing last week; now this week he’s going to cost you. With Lacy’s inactivity (putting it anything but lightly) and Rawls ineffectiveness, Carson looks to be the go-to guy. Now if Seattle’s offense could just get it together, right? Because the 49ers are, how do you say, not good.

Derrick Henry ($23) – The Titans drafted him for a reason, he’s still a beast, though Murray is still clearly the starter. He’s more of a matchup/bye week starter, but if anything happens to Murray (like it did in Week 2) Henry should step right in and be an RB2.

Chris Thompson ($21) – He stepped in for Kelley and ran the ball ok and caught some nice passes (although a for sure TD drop does suck) and scored twice. For Rob Kelley owners the sad truth is he is about as valuable as Thompson is in the Redskins offense. We all had our chance to get Thompson last week for nothing…now it’s time to pay up.

Rashard Higgins ($9) – A practice squad guy on the Browns? I’ve read he may be the Browns receiver to own, but I’d rather not have any Browns thank you very much. Kenny Britt is not the answer, Corey Coleman is hurt again, so Higgins very well may be the guy, but I wouldn’t go overboard on him.

Carson Wentz ($5) – The Eagles are pass first, have good weapons, and even if he fumbles a lot, he’s going to throw for a lot of yards. When even LeGarette Blount is catching passes you know Wentz is going to rack up the yardage. Wentz also has a favorable next few games: home versus the Giants, @Chargers, and home against Arizona. He’s my backup (and if I had Cam he’d be my starter… whaaa happened Cam?)

J.J. Nelson ($4) – He’s definitely talented, and speedy, and is in a mess of an offense. When John Brown is healthy, does Nelson see the field that much? Is John Brown ever really healthy? Can we get Larry Fitzgerald going first? I have a lot of questions, and unfortunately Nelson isn’t the answer. Of course if you need an injury fill-in you could do worse.

Samaje Perine ($4) – He’s only valuable if Rob Kelley is out. So if RB depth is tough in your league, go a few dollars more. If not, add him for a buck.

Chris Johnson ($4) – Johnson is going to get some carries, not sure he’s going to do much with them, but if you need/want to handcuff Kerwynn, then do it.

Jermaine Kearse ($4) – Is he the Jets #1? Do you want to start him? You shouldn’t, at least not until bye weeks. I’m leaving him out there, but you do you. Just don’t spend a lot.

$1 Bids: Allen Hurns and Marquise Lee; someone has to catch Garbage (Time) Blake Bortles touchdowns, and it was Hurns Week 2. Lee had an alright day and should be the future beneficiary of some TDs. Both guys are matchup/bye week guys.

James Conner, Steelers – if David Johnson can get hurt, LeVeon Bell can too. Why not own Bell’s clear backup before everyone else does?* (Note: Size of league dependent). Indy tight end Jack Doyle has a good matchup versus Cleveland and can fill-in in deeper leagues. Giants tight end Evan Engram is a decent play this week if needed at Philly, too.

Deonte Thompson, Bears, had 57 yards and a touchdown in true garbage time; I’d keep an eye on him but in deeper leagues he’s worth a speculative add. Matt Breida of the 49ers I like as pure speculation and because of Carlos Hyde’s health history; if you have depth make the add.

$2 DSTs: It’s again looking like identifying any defense playing the Bears, Jets, Browns and Colts is going to be pretty beneficial. So let’s keep doing that.  Miami goes to the Jets, Pittsburgh travels to Chicago, and the Browns and Colts play each other (I’m avoiding as I trust neither team). Also take a look at Tampa who may get a Vikings team sans Sam Bradford (It so fits Bradford is hurt, right after he looks awesome and gets Vikings fans excited…let me let them in on a little secret…he sucks).

A Final Thought: I don’t check my lineups during the Sunday games. I watch Redzone, so I keep track loosely in my head (which goes awry almost immediately) but I’m in too many leagues to worry about any one while watching. It’s made the experience much more satisfying as all I do is root for guys, not against them. This works unless of course you’re watching with a friend who is constantly checking his team. In this case, a loud bar is a good place to watch the games. Either way, I’m ecstatic football is back, and it’s already Week 3, so let’s party!