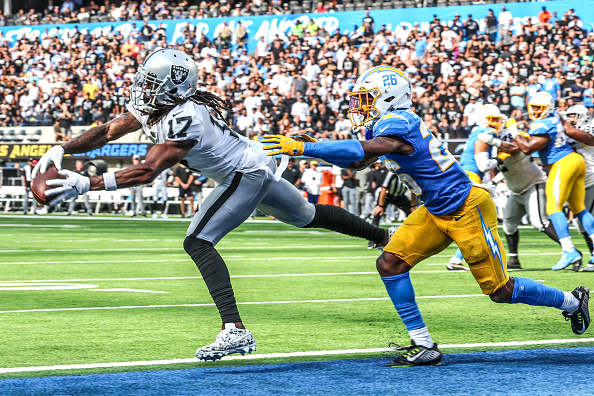 What are air yards, you say? The name kind of gives it away, doesn’t it? Air yards, irreverently discussed in this primer, matter because we actually get some context of how much a quarterback WANTED to get their receiver the ball, not just how often the receiver was able to catch it. It’s a stat that gives us much more clarity on what went right and what went wrong in a given team’s passing attack.

Each week, this column will dissect air yards, looking for actionable info in the weeks to come. For Week 1, we will do a quick analysis of the list of the 81 wide receivers who finished last week with at least 30 air yards.

These players received the five highest percentage share of their team’s total air yards in Week 1.

Justin Jefferson (105 air yards, 73.9%) – I mean, how soon is too soon to relitigate the fact that we should have all picked Jefferson with the 1.01 in offseason drafts? 74% of his team’s air yards? That’s absolutely crazy. Unsustainable? Sure, but it shows the type of usage and target share Jefferson is going to have all season.

A.J. Brown (94 air yards, 65.3%) – Exactly what we wanted to see from Brown’s debut with Jalen Hurts. He may not have scored, but he turned these elite air yards and share of air yards into 155 receiving yards. RIP to Devonta Smith and perhaps Dallas Goedert. This looks like the Brown + running game show after one week.

Davante Adams (187 air yards, 55.7%) – New team, who dis? Looks like the same Davante Adams to me. This was the guy who ranked second in target share and seventh in air yards per game with the Green Bay Packers, and so far it looks like Derek Carr only has eyes for him. Adams had 17 targets. The rest of the team had 18. Hunter Renfrow and Darren Waller, we hardly knew ya.

Robby Anderson (90 air yards, 50%) – FLUKE. Don’t buy into the yardage and touchdown hype. If you want to cling to anything, look at the eight targets. But Anderson had one catch for a 75-yard touchdown. His other seven targets resulted in 27 receiving yards. D.J. Moore will start to get his soon and Anderson will be a weekly boom-or-bust play.

Richie James (63 air yards, 50%) – Here’s your crazy stat of Week 1. Daniel Jones, God bless him, was 31st in air yards per attempt on Sunday (5.1 yards on 21 attempts). But he was THIRD in total yards per attempt (9.0 yards). That’s because guys like James, Saquon Barkley, and Sterling Shepard went all YAC-monster on the Titans. I wouldn’t bet on that continuing for anyone except Barkley moving forward.

Market Share of Air Yards: Highlights from the Bottom 20

These are intriguing highlights from the bottom 20 wide receivers with at least 30 air yards.

Marquez Valdes-Scantling (31 air yards, 10.4% air yards share) – Patrick Mahomes passed 39 times on Sunday, but 23 of them went to Travis Kelce, Juju Smith-Schuster, and Mecole Hardman. That looks like the circle of trust right now, and MVS is back to getting the rogue long bomb just like in Green Bay.

Robert Woods (36 air yards, 12.3% air yards share) – Treylon Burks and Robert Woods are left scratching their heads after Kyle Philips and Dontrell Hilliard came in and stole all the passes out of the air from Ryan Tannehill. Two targets is terrible for Woods, but I’m willing to grant a little leash here since he is coming off of major knee surgery.

Devin Duvernay (58 air yards, 13.6% air yards share) – Duvernay did tie for third in targets on the Ravens, he did catch 100% of his passes, and he did score two touchdowns. That’s the good news. Will that continue? Likely not. Duvernay only ran 18 routes on Sunday, which was 85th among wide receivers this weekend. He just happened to be very open on each one of his four targets.

Sutton was number five among all wide receivers with a 20.1 yard aDOT in Week 1. That typically plays right into Russell Wilson’s hands, as he is an excellent deep-ball passer. But in Week 1, he looked quite rusty on those throws. His 28.6% deep ball completion percentage was just 21st among quarterbacks over the weekend. Last year, Wilson was around 37% of deep balls finding the hands of his intended receivers.

If Sutton keeps running the long routes and Wilson improves in his accuracy to last year’s levels, the sky’s the limit for this duo. Sutton already had the second-most air yards of any wide receiver this week and should see some real monster games very soon.

Shepard ranked 24th in receiving yards in week 1. His 49 air yards? That ranked 60th. Add it all up and it looks pretty dismal. Just two catches for Shepard for 71 yards and a score. But one of those catches was a 65-yard catch and run that is highly unrepeatable week to week. I look at the Giant’s passing tree and I see a lot of possible options. If Wan’Dale Robinson is back, that means New York is throwing to five legitimate options.

I doubt you had Shepard in your lineup for Week 1, and there is no need to rush and add him for the weeks to come either.

This is the weekly place where we check how Deebo Samuel is producing compared to his model-breaking 2021 season.

In his first game of the 2022 season, Deebo Samuel was another victim of the roller coaster that is Trey Lance. He also had one of the strangest stat lines you will ever see from a true wide receiver.

I’m sorry friends, but this isn’t a number one wide receiver, right? This looks like a Rex Burkhead stat line or something. We can reasonably blame a lot of this terrible production on the horrible weather conditions, and Trey Lance’s inaccuracy throughout the game.

According to Player Profiler, Lance was 32nd out of 32 quarterbacks in clean pocket completion percentage. His eight targets? An aDOT of just 4.6 yards, 80th among wide receivers this weekend. The passes that Samuel did catch? They averaged -1.0 yards before the catch. That means the receptions Samuel did have were basically running back dump-offs.

I was out on Samuel before the season and I’m still out now. It’s possible he gains even more value as a rusher with Eli Mitchell out a couple of months. But the Lance-Samuel connection is going to really have to show me something before I buy back in.

Hunter Renfrow (29 air yards, 21 receiving yards) – See Adams, Davante. If Adams is going to soak up that much in targets, and all that’s left for Renfrow are the scraps near the line of scrimmage, there will be some spike weeks here and there, but I’m worried. We need more data here.

Allen Robinson (28 air yards, 12 receiving yards) – All we can do now is hope and pray that Sean McVey was right when he said they want to get Allen Robinson more involved. The defenses will get easier moving forward and some massive shootouts are coming. But Cooper Kupp started off with 15 targets and Tyler Higbee had 11. That left 15 for the rest of the team. I do believe Robinson starts getting some of those Higbee looks soon, so buy low if you can.

Brandon Aiyuk (25 air yards, 40 receiving yards) – Also a Trey Lance product. But the other issues here were named Jauan Jennings and Ray-Ray McCloud. Both of those guys averaged at least 15 yards per reception (they combined for five on eight targets), but those should be Aiyuk’s balls. But the Lance thing scares me much more than the competition. Aiyuk played 10 more snaps than any other San Francisco skill position player on Sunday.