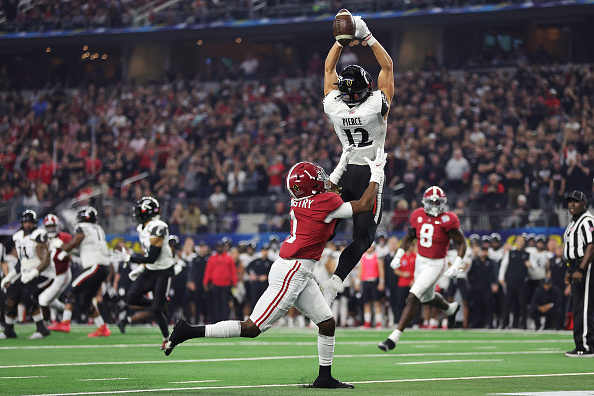 With the fifty-third pick in the 2022 NFL Draft, their first selection overall, the Indianapolis Colts selected Cincinnati wide receiver Alec Pierce. Having made that selection, the Colts have now drafted at least one wide receiver in every draft of the Frank Reich era, with Pierce being the third significant investment of that period, following second-day picks Parris Campbell (second round, 2019) and Michael Pittman Jr. (second round, 2020). Pierce is only the fourth Cincinnati receiver to be drafted since 2000, the others being Jon Olinger (fifth round, 2003), Mardy Gilyard (fourth round, 2010), and Chris Moore (fourth round, 2016).

Pierce was already renowned for his athletic prowess going into the season, but really established himself as a major prospect with a career-best receiving line of 52-884-8 (17.0); that came on the heels of an injury-shortened junior campaign (knee scope, 17-315-3), his only other season of significant output coming as a sophomore in 2019, when he caught 37 passes for 562 yards and two touchdowns (17.6 yards per catch.) His senior line was good enough to lead the Bearcats in receptions, yards, and touchdowns by comfortable margins, being eventual third-round pick Desmond Ridder’s favorite target, if not a true workhorse from a volume perspective.

Pierce’s second-round draft status was undoubtedly in large part based on his physical and athletic profile. His 9.83 40-yard dash, 99.6% ten-yard split, 97th percentile, and 95th percentile broad jump. Moreover, those explosive testing numbers carry over into his game. Predominantly playing split end but seemingly taking a few snaps per game lined up as an inside receiver last year, Pierce is a true deep threat who forces opposing cornerbacks to play off-coverage, eating up their cushions quickly with his explosiveness off the line and showing the ability to stack defenders, keeping them in his hip pocket. He’s a weapon on contested catches, using his frame to shield defenders from the ball and showing the leaping ability, tendency to high-point, and focus to come down with targets through contact, traits which allowed him to make thirteen contested catches last season according to PFF. Many of his routes broke over the middle of the field, where he displayed impressive toughness. Although he doesn’t run too many patterns breaking toward the sidelines, he flashes good awareness and body control near the sideline.

That said, route-running is one area where Pierce doesn’t show a ton of polish so far. Although he works to sink his hips and snap off routes to create separation at the stem and flashes the ability to settle into soft spots in zone to create easy completions for his quarterback, his overall route tree was limited at the college level (a lot of deep routes, clearing patterns, slants, and crosses), and there are some elements to his technique that need work. He could be more efficient with his releases, maintain balance more consistently through the route (particularly against physical defensive backs), and improve his overall hand usage. Continuing to develop as a route-runner will be critical to securing a regular role in the passing game early in his career, especially because he is more of an explosive athlete than a fluid and flexible one. Otherwise, he may end up spending the beginning of his time with the Colts as more of a complementary deep threat, red zone target, and blocker.

Unlike most teams in the league, only two receivers in the Colts offense were on the field for a majority of the snaps in 2021: Michael Pittman (88%) and Zach Pascal (78.4%). The remainder of the offensive playing time was split between T.Y. Hilton (30.3%), Ashton Dulin (29.5%), and Parris Campbell (15.9%). However, that was probably not by design, as Hilton and Campbell both missed extensive time due to injury; back in 2020, Hilton played exactly 63% of snaps, just below Pittman (64.1%) and behind Pascal (76.4%). With Pascal now in Philadelphia and T.Y. Hilton still unsigned, there could be a major role in the offense available to Pierce, potentially as a starting receiver opposite Pittman. Whether or not the team brings in additional help at the position this year may depend on how quickly Pierce acclimates to the pro game; if he struggles early, Indianapolis could decide to use some of their $10.8 million in cap space to bring back Hilton, or sign a free agent like Julio Jones, who would likely be able to step right into a starting role given his chemistry with Ryan. Given the team’s youth at receiver – no wideout on roster is older than 25 – a veteran addition of some sort seems likely.

How significant is the second-receiver role in Frank Reich’s offense? Not particularly. Given that Jonathan Taylor is one of the league’s top backs, it’s likely that the Colts will continue to lean heavily on the run game this season after finishing fifth in rushing attempts last year versus twenty-seventh in pass attempts. With the exception of Michael Pittman’s whopping 129 targets last year, Indianapolis usually spreads its targets around between a receiving back (Nyheim Hines in each of the past three seasons), tight ends, and receivers, rather than relying on a high-volume secondary receiver; the team’s second receiver was targeted 68 (Hilton), 71 (Pascal), and 69 (Pascal) targets in 2019, 2020, and 2021, respectively, with Pascal’s 44-629-5 line in 2020 being the high-water mark for a number two. Something in that range may be a reasonable expectation for Pierce should he manage to ward off any veteran challenges and end up starting opposite Pittman next year, especially because the Colts are planning to get Hines even more involved in the offense in 2022.

Pierce could also suffer from playing in a passing game that’s likely to be relatively conservative, but there’s some reason to be optimistic about the Colts’ switch at quarterback. Last season, Carson Wentz tried just 42 deep throws, with just 6.9 yards per attempt on the year and a middling average target depth of 8.2 yards. It’s possible that incoming quarterback Matt Ryan may be even less dynamic at this point in his career: while he went deep two times more than Wentz and averaged 7.1 yards per attempt, his average throw came just 7.3 yards downfield. However, there’s an argument to be made that Ryan’s drop from 58 deep throws and an average depth of 8.8 in 2020 was more personnel-based, having lost Julio Jones and Calvin Ridley and playing behind an offensive line that was closer to league-average. While he doesn’t have the strongest arm, Ryan is an accurate deep passer who throws with touch and anticipation down the field. Perhaps the Colts felt that drafting Pierce would create opportunities for Ryan to take shots down the field off of play-action, thereby giving the rookie chances for high-point plays in a fantasy context, even if ending up as a high-volume rookie would come as a surprise.

I continue to be impressed with your thorough analysis, which includes backgrounds on the players and coaching implications.