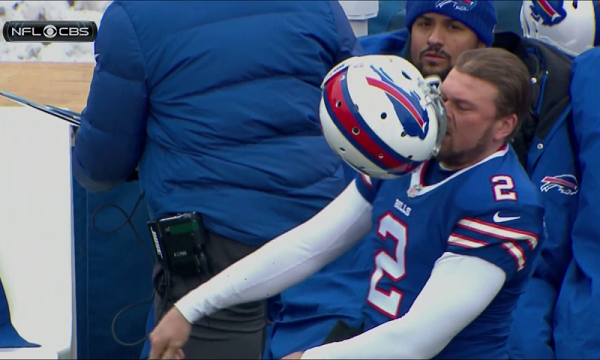 Hey gang! It’s Reid here to bring you the injury report after Week 1 so you know who to drop and who to keep an eye on for the next couple weeks. I’ll be doing this all season and try to add some comedic flare to the posts. Let’s look team by team at the injuries and what they mean for you:

Folding Tables in the parking lot – #BillsMafia was back at it in midseason form with the WWE table-breaking jumps.

Danny Amendola (Concussion – week to week) This one just stings. Losing 2 of your 3 white WR’s could be problematic for the Pats. This offense didn’t look nearly as good without Julian Edelman and losing Amendola, who has a history of concussion problems, could make matters worse. Chris Hogan should see a high workload for the foreseeable future.

All viewers of their Offense – It was offensive to watch this team attempt to move the ball down the field. And the most cringeworthy part is that this isn’t the worst total roster in the NFL right now. That title belongs to the next team on this list.

Scott Tolzien believers (forever) – Good God was that tough to watch. With Andrew Luck being completely M.I.A. and nobody knowing how long he’s going to be out (I think there’s an outside chance he doesn’t even play this year), this team is probably, on the whole, worse than the Jets. Too bad there isn’t a quarterback

All of the TE’s (Mainly C.J. Fiedorowicz) to concussions – Seriously. They play on Thursday as well. It looks like C.J. won’t be dressing anytime soon, and frankly I wouldn’t want any other TE this roster has to offer. If you’re in an IDP league, check to see if JJ Watt can accumulate points for TD’s as well. I am going to call it right now. He’s catching a touchdown on TNF from a goal line package that everyone and their mother will see coming except the Bengals.

Allen Robinson (ACL Tear – Out of Season) – This is a shame. Contract year too. Allen Hurns in theory should get a boost, but with Blake Bortles throwing the pigskin, I’m not sold.

John Ross (Knee – week to week) – Didn’t play Week 1, Status uncertain as of this posting. Looks like he could give it a go, but it’s a short week. Will be a game-time decision from the time of this post. Will update if the status changes.

My faith in them = Was down 1 point and Younghoe Koo for the final FG. Classic Chargers.

Sebatian Janikowski (Back – At least 8 weeks) – So this was a very low-key injury that happened right before the games on Sunday. Giorgio Tavecchio isn’t just a knockoff Fabio, but also the kicker you should be picking up if you drafted Seabass before last week.

David Johnson (Dislocated wrist – “Hopefully by Christmas) – Brutal blow for 1st pick fantasy owners. Stash him on the IR in case he has biblical recovery. Kerwynn Williams is the sexy name to pick up, but it should be a committee. They do play the Colts this week, a team that just gave up 46 to the LA Rams.

Caleb Sturgis (Quadriceps – Indefinitely) – Just pick up another kicker guys. Will have further updates for you Sturgis diehards when it becomes available.

Passing game (Until OBJ returns, maybe) – That was ugly to watch Sunday night. Their O-Line stinks. This game was the biggest waste of time to watch if you weren’t a Cowboys fan.

Kevin White (Shoulder – out for season) – I’d say I’m surprised, but that would be a lie and I would rather not do that to the fine readers here. Safe to drop him in every single format.

Cam Newton – Call this one a hunch. But I went back and watched that game against the 49ers and he didn’t look right. His offseason surgery might be hindering him more than the team is letting on. Keep your expectations tempered this week as he goes up against the Bills.

The memory of their high-octane offense.  It didn’t look good on MNF and they lost both their starting LT and RT. Adrian Peterson looked frustrated getting 5 carries in his homecoming match against the Vikings. I know Minnesota is a tough task on the road, but this offense doesn’t look right. And in traditional Saints fashion, they crush you for drafting their #1 WR.

That’s it on the injury front this week folks. It should be more concise as the season moves along. Normally the first couple weeks have an uptick on the injury front. Hopefully your teams weren’t beaten down too badly. If there are any players that you have questions about, please feel free to post them in the comments section and I’ll respond to them as quickly as possible.