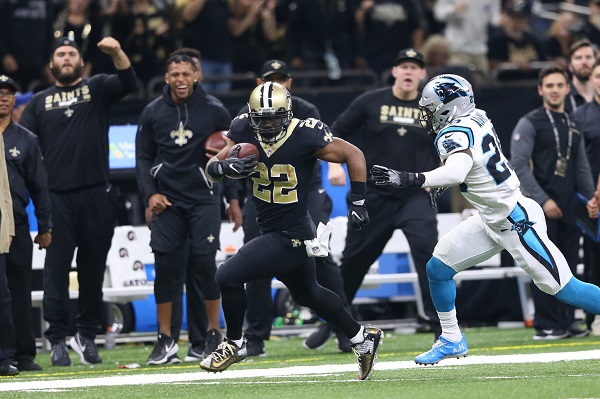 I’m back and here to help those of you who made the playoffs (congrats!) to make the right decisions from an injury perspective this week to get you one week closer to the championship.

Mark Ingram is Quesionable tonight with a toe injury and didn’t participate in practice. I don’t think he’s playing against the Falcons, and even if he does, the touches will be limited. Expect another stellar Alvin Kamara performance on TNF.

Offense in the Bills-Colts game. Holy hell these offenses are going to look UGLY. Kelvin Benjamin will be playing for the Bills. Tyrod Taylor is going to be a massive unknown as he was practicing on Thursday, but with a limp and not looking elusive. We could see the return of the Nathan Peterman era (we are all witnesses) and I think that actually increases the value of Zay Jones and Benjamin this week. Peterman will probably force a lot of passes and eventually those targets will lead to points for you. A name to keep in mind though is Brandon Reilly. He’s coming up from the practice squad with Jordan Matthews heading to the IR and the Bills like him quite a bit. Will be interesting to see how many snaps he gets.

John Ross is ending his impeccable rookie campaign by being put on IR (0 catches, 1 fumble) and Joe Mixon is looking like he won’t play this week. On the Razzblitz Podcast this week (Check it out!), we all said that Giovanni Bernard, the gym leader in Viridian City, will be a monster play this week.

Aaron Jones is back for the Packers and is sitting on top of the depth chart for RB’s in Green Bay. This means that Jamaal Williams owners will likely not get the necessary production for a playoff win this week. Adjust your lineups accordingly.

Will Fuller V will play this week and it’s a juicy matchup as the Texans host beefcake Jimmy Garoppolo and the 49ers.

Both Allen Hurns and Marqise Lee didn’t practice on Wednesday. Keep an eye on this one as the weekend rolls around. I think #Sacksonville tries to run it with Leonard Fournette all day in this one.

Amari Cooper is still dealing with an ankle injury that should keep him out this week against the Chiefs. The Razzblitz squad all love Michael Crabtree this week and I agree. Marcus Peters has been suspended for this game by Andy Reid for doing clown things at the end of the game last week. If you’re in an IDP league, make an appropriate change.

John Matthew Stafford Ph.D Esq. XII aka Matt Stafford has a bad hand injury and was “limited” on Wednesday. Vegas can’t even put a solid line on this game and his health can make Marvin Jones and Golden Tate rather useless if he’s not in the lineup. And in case you were wondering, Jake Rudolph is the backup in Detroit and is NOT worth picking up. I repeat, NOT worth adding.

Doug Martin is back and I have no idea why. Dirk Koetter is making all of the wrong personnel decisions with this team. Peyton Barber is a must-start if he is getting the majority of the touches, but we won’t know that until Sunday morning. Keep an eye out for reports during the weekend for this one.

Rishard Matthews was limited and should be playing this week. It’s a bad matchup as he’ll likely line up against Patrick Peterson. Delanie Walker is a veteran of the injury report but unlike Jordan Reed, he actually dresses and plays in games.

No Adrian Peterson this week (check the updates this weekend as this should still hold true) and Kerwynn Williams was limited in practice, but should be healthy enough to go this week. This game is going to be tough for the Cardinals on offense even though they’re at home.

Emmanuel Sanders didn’t practice on Wednesday but I suspect that he’ll still play on Sunday. I think the Broncos take it to the Jets this week and Sanders could have himself quite a game (Even with whatever living organism is playing QB for Denver).

Jordan Reed will not play this week. In similar news: The sun rises in the east, the sky is blue, and grass is green.

Zachary Ertz (The full first name is just better) didn’t practice on Wednesday and I have doubts that he’ll draw into the lineup come Sunday. This is a game where a healthy Ertz would make me love the Eagles in this spot. With him likely out, I expect Alshon Jeffrey and Nelson Agholor to get some good looks and for the RB’s of the Eagles to do serious work. For the Rams, we’re still a week away from being close on Robert ‘Bob’ Woods.

Jerry Jones had his ego and ownership strength injured this week with news that The Rog signed a contract extension worth $200M through 2024. Atta boy Jerry.

Eli Manning is starting again after Ben McAseeyalateralligator was relieved of his coaching duties. Manning should have Sterling Shepard to throw to, though his favorite target this week and every week ROS will be Evan Engram.

Rob Gronkowski will not play this week as he has been suspended for their match against the Dolphins on MNF. It should have been for more than one game. Seriously, it should have been 3 games. Adjust your lineups accordingly.

That’s it for this week. Post in the comments section if you have any questions or concerns. Thanks again for reading and good luck in your playoff matchups this week Razzballer$.