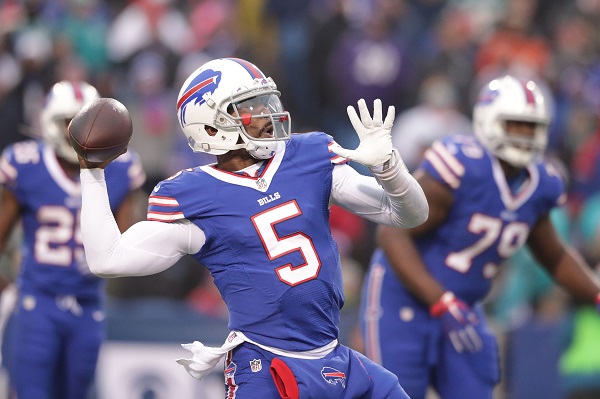 Hey there Razzballers. Reid here again to keep you up to the minute for the fantasy football semifinals. In this post, I’m mainly going to be focusing on players that would be starters or flex options for a team still alive in the playoffs.

Tyrod Taylor is starting this week with a wild Joe Webb as the backup, so don’t expect any sort of benching in this one. This is a good spot for Taylor and if you have a QB with a horrendous matchup, Taylor should be a solid fill-in. Kelvin Benjamin will be a game-time decision but I’m not starting him. It’s too inconsistent and the rule in the playoffs is don’t get cute with your lineup.

Aaron Rodgers is back after a collar bone injury. You have to start him if you own him, and for the 93% of you who held onto Jordy Nelson through the brutal stretch, your patience may be rewarded here. All Panthers will be a go this week, but Greg Olsen is a big risk to take when he hasn’t shown to be able to be on the field for the entire game.

DeAndre Hopkins is matchup-proof, but he’s battling a toe injury right now and you have to be concerned if you own him. I would brace yourselves for a Sunday-morning scratch if the toe doesn’t get better by Saturday afternoon.

Leonard Fournette hasn’t practiced all week. I don’t think he plays, but bologna-loving Doug Marrone could still throw him into the starting lineup. I expect Chris Ivory to be a big factor this week, so if he’s available in your league, pick him up.

Joe Mixon is currently listed as questionable and in concussion protocol still. It’ll come down to Sunday morning for him to determine whether he’s playing. Keep an eye out for this one.

Josh McCown is done for the year in New Jersey. They play at the Saints and Bryce Petty is the starter now. I don’t think you need me to tell you that Robbie Anderson probably isn’t a good play this week. This game should get ugly in a hurry.

Alvin Kamara and Michael Thomas will be a go this week and good god they have an excellent matchup. Mo Wilkerson isn’t traveling with the Jets so Kamara should have every running lane imaginable this week.

Carson Wentz is done for the season, but Zach Ertz will be back and I think Nick Foles looks pretty good this week against the Giants (who stink). Alshon Jeffrey didn’t practice on Thursday so that is something to keep an eye on as the weekend rolls around.

Adrian Peterson is done for the year with a neck injury and holy god this game is going to be miserable to watch. Just check out the injury report for the Cardinals and Redskins and you’ll think it is 3242 pages long.

Robert Woods is back for the Rams in there big game against the Seahawks. He should be started in all formats. Love me some Bobby Woods this week.

Everyone in the Pats-Steelers game will be playing and I think most offensive players should be started in this game. We discussed this game quite a bit on the Razzblitz podcast this week.

Marcus Mariota practiced this week and will play despite a knee sprain, but you can’t trust him at this juncture in the season. Jimmy Garappolo is as beautiful as ever and has the 49ers on a winning streak right now (seriously). I think the Niners extend that streak this week.

I can’t believe the SNF game (Cowboys at Raiders) wasn’t flexed out. Amari Cooper isn’t looking like he will play this week as he hasn’t practiced all week. Marshawn Lynch should still be there to play, but I expect Oakland to be chasing points in this one.

That’s it for this week. Good luck to all of you who are still in the playoffs. Thanks for reading.