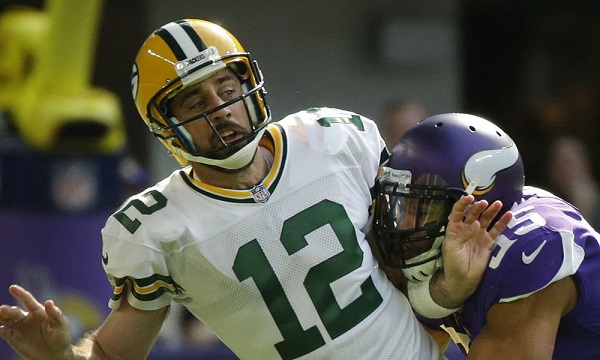 Hey there everyone. Reid here to give a quick recap of the injuries for the title matches across 90% of all fantasy league formats.

Aaron Rodgers has been placed back on IR after the Packers were eliminated from the playoff race last week. And Davante Adams will miss this week with a concussion after a nasty hit by Thomas Davis of the Panthers.

Both Cameron Brate and DeSean Jackson did not fully practice on Thursday, but their matchup stinks and I don’t think you could trust either one in the most important fantasy matchup of the season.

Devin ‘bag of’ Funchess didn’t practice, but that is the new normal for him. He’s playing through pain and should still be dressing for this game. He’ll have a great matchup against a below average (aka horrid) Bucs secondary.

DeShone Kizer is going to be playing through a massive bruise to his ego this week. Hue Jackson, a man almost trying to get fired at this point, pretty much said his QB doesn’t have “it”. That’s ice cold man.

Joe Mixon is back after missing 2 weeks with a concussion. He should see the lions’ share of the carries and is in a good spot against the… Lions.

Travis Kelce didn’t practice on Thursday, but it looks to be a maintenance day. No need to fret this one. Fire him up if you own him.

Kelvin Benjamin was talked about quite a bit on this weeks’ Razzblitz podcast. He has a somewhat serious knee injury that will require surgery in the offseason. He’s currently playing through pain and with a Bills offense that doesn’t care about the WR position. And they play at New England. As much #BillsMafia flows through my veins, this is not the week to be starting KB13

Rex Burkhead isn’t going to play this week. Get your hands on Dion Lewis somehow. I expect a monster game from him. Don’t fall for the Mike Gillislee trap this week. Outside of the first two games of the season, he has been significantly worse than Lewis and Burkhead and it hasn’t been that close either.

Tevin Coleman is no longer in concussion protocol and will be playing for the Falcons when they travel to New Orleans. So there’s that.

Both Matt Forte and EJ McGuire didn’t practice on Thursday and that makes Bilal Powell a VERY sneaky top-10 RB play this week. Also, one of my two major upsets of the week is in this game. (Watch the Jets get blown out by 30 here)

Probably the biggest injury news for teams heading to the title match in their leagues comes from the Rams. Greg Zuerlein is out with back problems. Make sure you grab another kicker. Seriously, kickers are important.

Samaje Perine injured his groin in practice Wednesday and was limited yesterday. Washington has just had the worst time with injuries this season. I don’t think they play him, but even if he dresses, I don’t think you can play him.

Outside of Marqise Lee, look for all Jags to play this week. I think this is more of a Blake Bortles game than it is a Leonard Fournette game from a fantasy perspective.

My heart skips a beat every time Jimmy Garappollo hits the screen (this joke will never get old) and even Doug Marrone said that Jimmy G is the hottest QB in football (unsure whether he’s referring to his play or his looks). Also, welcome to my second upset special this week.

Ezekiel Elliot is back this week after his 6-week hiatus in Europe. He should see a ton of carries, but I’m skeptical about whether it’s necessary. Rod Smith has actually looked good these past few weeks.

Antonio Brown will be out this week for when the Steelers absolutely murder the Texans on Christmas Day. Seriously, I cannot believe this atrocity of a game will be on at that time. Enjoy the company of your family or in-laws or go see a movie or something.

Amari Cooper still hasn’t practiced and has the ankle still bothering him. It shouldn’t matter since the Raiders, like the Texans, will get bludgeoned this week against the Eagles. I expect this game to be over quite quickly.

That’s it for this week. I’ll do one more injury report for next week for those of you in the wacky formats that play through Week 17. Hope you all have a Happy Holidays and successful title game in your fantasy leagues. Post any comments and questions below and I’ll answer them as quickly as possible.