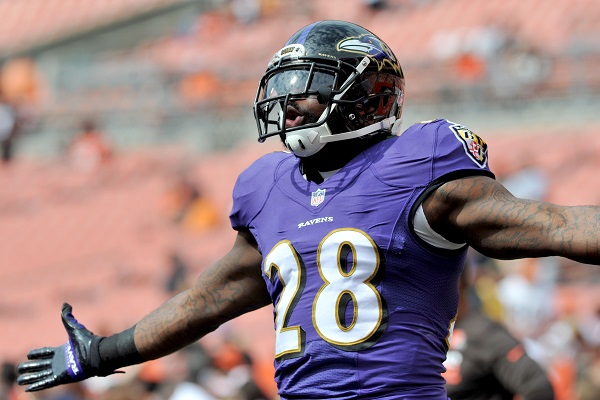 Hey there everyone! I’m back to hit you with the injury news for the Week 3 games that are fantasy relevant. If you have any questions please feel free to hit up the comments section below and I’ll respond as quickly as I can!

Terrance West didn’t practice and this game is in London. Even if he does dress, Javorius Allen would be the running back you’d want on the Ravens. We should also point out that the defenses in this game are exceptional and should be a score similar to the Panthers-Bills.

Demaryius Thomas was limited in practice on Wednesday. Still a WR2 for me this week. You can’t stop Trevor Siemian, you can only hope to contain him. Play Thomas with confidence.

Bills Passing Game. Good lord this was tough to watch in Week 2. WR’s struggle to get separation in man coverage and they face the Broncos this week. Probably best to keep your Bills pass catchers on the pine.

Terron Armstead and Zachary Strief. Why am I putting two tackles in this injury report? Because they play at Carolina next week and the offensive line in the Big Easy right now stinks. These injuries to me make it difficult to play any Saints with confidence. (Obviously you drafted Brees super early so you’re forced to play him).

Kelvin Benjamin. He didn’t practice on Wednesday but was just sore so nothing to worry about. With the Greg Olsen injury, expect Benjamin to get a ton of targets the next couple of weeks.

Jesse James. Hobbled by an ankle injury. This seems like the prime week to get Le’Veon Bell back on track. Keep James on your bench this week.

Jordan Howard has a banged up shoulder but he did practice a little bit on Wednesday. I expect him to dress but it’s not an ideal scenario for him. With a bad matchup already and Tarik Cohen taking 3rd down snaps away, pray it works out for you.

Andrew Luck. Was ruled out on Monday. Seriously. I really am beginning to have doubts that he’ll even play this year. This Colts roster is atrocious and I can’t imagine the front office putting in their franchise QB when the team is 0-9 at best.

Sammy Bradford. What a weird situation for his “injury” last week. Genuinely came out of nowhere. They (the Vikings) say he looks good and feels better, but what the hell does that mean? We only care about Week 3 (for this week). Keep an eye on this one. Will likely come down to a dramatic Adam Schefter tweet Sunday morning to inform us all on whether Bradford is playing or not.

Entire Patriots WR corps: Seriously though. Everyone in their WR corps besides Brandin Cooks was limited in practice on Wednesday. I expect all of them to be able to play, including Danny Amendola. Just my gut feeling, but this feels like a Cooks-White-Lewis type game for the Patriots on offense.

Dolphins WR’s: Both DeVante Parker and Jarvis Landry are on the injury report. It would be a shame if one of them missed this week because they play the New Jersey Jets (You read that right. There’s only one team in NY and it’s the Buffalo Bills). Parker is dealing with an ankle sprain and Landry is hampered by an overload of targets and a knee concern. I expect both to play but keep an eye on these. The Dolphins could realize on Sunday that they play the Jets and rest both of their WR’s.

The Giants Offense: I said it last week and I’ll keep saying it. Their offensive line is so atrocious that they will ruin Odell Beckham Jr’s fantasy value this year. That O-line made the Cowboys D look like the ’85 Bears. You’re starting OBJ because you took him in the first round but I wouldn’t feel good about playing any New Jersey Giants (You had to know this quip was coming) until this offensive line pulls it together.

The Seahawks Offense: See above. This offensive line just sucks. Russell Wilson is running for his life and can’t get the ball to Jimmy Graham. They are on the road against a tough Titans team and I expect this offense to struggle once again. So much so that I’d sit all of my Seahawks until they show they can score more than 2 touchdowns in a game.

Corey Davis and DeMarco Murray: Expect Davis to miss this week. Murray on the other hand looks to be a game time decision. I wouldn’t be surprised if they rested the veteran and handed the keys to the car to Derrick Henry this week after looking very good in Week 2 against the Jaguars.

Tyler Eifert: Tell me if you’ve heard this one before: Eifert hampered by back injuries. Seriously, every time with this guy. There’s no way you can play him with confidence this week at Green Bay. The O-line for the Bengals is hot garbage and Eifert isn’t 100%. Hit the waiver wire if you haven’t already. And you’re not starting John Ross this week either.

Green Bay WR’s: Both Jordy Nelson and Randall Cobb have injuries they’re fighting through. I expect both to play, and it’s not a horrible matchup. Keep an eye on these two as the weekend rolls around for more updates.

Washington (Everyone): Not really everyone, but several key fantasy pieces. They have O-line members limited in practice and banged up, and you know how I feel about skill position players when they have a bad O-line with them. Jordan Reed didn’t practice Wednesday and it’s not looking ideal for him this weekend. He’s never played more than 14 games in a season, so you know he’s going to miss a couple games this season. Robert Kelly has some broken ribs and was limited in practice on Wednesday. I don’t see how they trot him out there on Sunday. Simanje Perine and Chris Thompson (so much better than Washington realizes) should be serviceable in Kelly’s place. Thompson in PPR leagues is a strong flex pick in my opinion.

Thanks for reading! If you have any questions or comments or if I missed anybody you are interested in, comment below and I’ll respond in a timely manner.