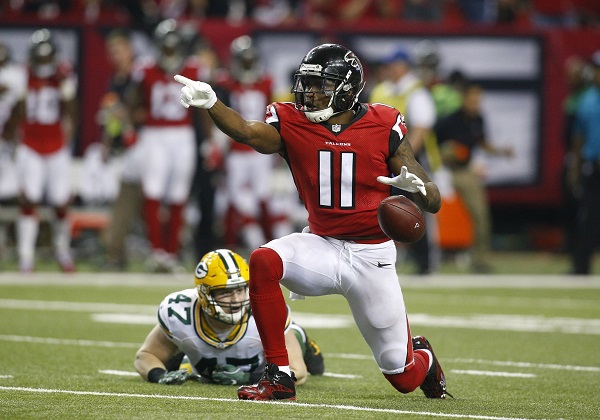 Hey Razzballer$ (yeah, that dollar sign in place for the ‘s’ just happened), here is your injury rundown for this upcoming week…

Julio Jones: It’s a back issue that will not keep him out of the game. You’re starting him regardless. Keep expectations in check though as the Bills haven’t given up a touchdown through the air this season.

Isiah Crowell: It’s a shoulder issue and he was limited at practice. No signs to say he won’t play, but I would put him on the bench this week solely on matchup.

Delanie Walker: He’s day-to-day with a hamstring injury but should be out there on Sunday. While he has yet to find the end zone, I’m still starting him this week.

Cam Newton: It’s almost an everything issue with him. He’s going to play, but I’m not thrilled about what we’ll see. His offense as a whole is banged up. It’s a bad matchup (at NE). You should look elsewhere for your QB this week.

Kelvin Benjamin: It’s a knee issue. He has practiced the past two days but still is listed as questionable. I think he’ll play, but I would keep an eye on it.

Carlos Hyde: It’s a hip issue that kept him from full participation last game. He’s being held out of full practice this week but should be set up to play this week. He’s a solid RB2.

JJ Nelson: It’s a hamstring problem. He is expected to play, but I wouldn’t take out a second mortgage on the house betting on his performance.

John Brown: He started practicing this week after missing the last two games. Keep an eye on this one. I’m waiting a week to see how he performs before inserting him into a starting lineup.

Jay Ajayi: He should be good to go this week. You have to start him most likely if you own him. I’m not thrilled about the matchup though.

Michael Crabtree: It’s a chest issue. X-rays came back negative, but he’s limited in practice right now. Keep an eye out for the Friday team injury report. Low WR2 in my book.

Andrew Luck: I have been saying it for a while now. He’s not practicing this week. I don’t think he dresses this season, especially if this team is 2-7 or something along those lines by the time he is healthy. He’s safe to drop in my opinion.

Doug Baldwin: It’s a groin issue and he’s being held out of practice until Friday. So keep an eye out for that. He has a juicy matchup and I’m probably starting him with extreme confidence.

Jimmy Graham: It’s the ankle again. He’s not 100%. But the matchup is so good this week and I expect him to play. Primetime is a prime time for Jimmy G to deliver for those who drafted him.

Sammy Watkins: Was limited in practice on Wednesday dealing with a concussion.