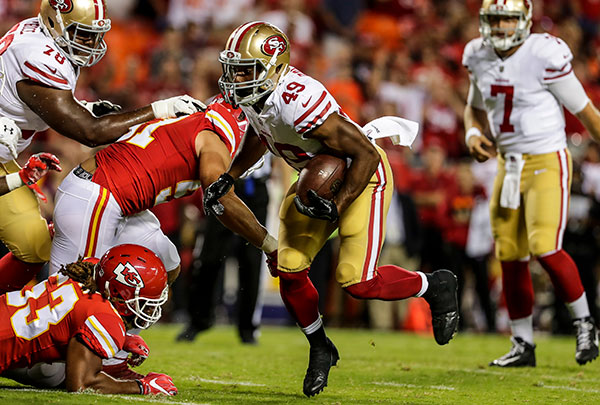 To all the OBJ owners, I’m sorry. One of my closest friends is a Giants fan and good god he was like a sad puppy after the injury news. But unlike the Giants, you’ll be able to recover (maybe). Here’s the rundown for the rest of the injuries you need to know about:

Wendell Smallwood has a knee issue and the Eagles are being less than forthcoming with the extent of the injury. There’s a chance he plays tonight against the Panthers but I’m not using a roster spot on him. Guys like Marlon Mack and Simanje Perine would be good replacements. My sneaky flex player this week is Matt Brieda down in San Francisco.

DeVante Parker didn’t practice on Wednesday and things just aren’t looking great for the Dolphins on offense right now. Smokin’ Jay Cutler is not throwing the ball well. Jay Ajayi is not running the ball well either. Keep an eye on this as the week progresses.

Quintorris Jones aka Julio Jones was limited in practice this week. I expect him to play and if you own him you sure as hell are starting him. I know Rashad Jones is the Pro Football Focus top-rated safety, but Julio is just that good. Coming off a bye, expect great things. Mohamed Sanu didn’t practice on Wednesday but it being considered a game-time decision. Keep an eye on him as the week progresses.

Understand the Packers RB situation: Ty Montgomery is going to play, but Aaron Jones is likely to get some carries. You are starting Montgomery if you own him and Jones is a reach for a flex play until we see what kind of a role he has with Ty healthy.

Rob Gronkowski didn’t practice this week but is expected to start against the Jets. I’ll be honest with you guys. I have this weird feeling that the Pats keep him out this week. If you own him, make sure you have a backup plan ready. We’ll find out more later in the week.

Bilal Powell looks to be out this week, so get ready for the E.J. McGuire hype train. I don’t know if this is a great week to start him, but if you need to shoot the moon with your lineup and take a risk, it certainly isn’t the worst risk worth taking.

Rob Kelley is described this week as a “long shot” to play this week. Good enough for me! Get your Chris Thompson and Simanje Perine into the lineup. This is a juicy matchup against the 49ers, especially for Perine.

Leonard Fournette was limited in practice but he’s going to play. I’m not including Marqise Lee in this because you should not be starting him against the Rams. Blake Bortles is still “quarterbacking” for the Jags and I have doubts about his ability to get Lee the ball vs the Rams.

Travis Kelce got knocked into next week on a hit and suffered a bad concussion. We’ll know more by the end of the week, but I have doubts that he plays. Austin Hooper is available in a lot of leagues still and could be a good pickup for you Kelce owners (that includes myself).

Mike Williams (WR – LA Chargers) I’ll admit, I wrote “San Diego” at first before changing it. No idea why this team does not just move back. Anyways, the #7 overall pick in the draft is expected to draw into the lineup and gets a decent matchup against a porous Raiders secondary. They’ll most likely keep him on a limited snap count, so if you have the space on your bench for a longshot stash, I think he’d be worth it.

Derek Carr is expected to play but I’m worried for him. The OL hasn’t been great for them and the Chargers have some elite edge rushers. Amari Cooper still has the yips after his endorsement deal with Butterfingers. You have to start him, but temper your expectations.

New Jersey Giants: Lol. Everything. Their top 4 WRs suffered injuries and won’t play this week (OBJ is out for the year) and they get a nightmare matchup at Denver. Eli Manning should be dropped in every league. This offense is going to perform the way we thought the Jets were going to perform going into this season. Wayne Gallman will get the carries, but with no outside threats and an atrocious O-line, I’m keeping him on the bench this week. Denver could play with 10 on defense and still shut out this Giants offense.

Thanks for reading everyone. If you have any questions or concerns, post in the comments section and I’ll try and get back to you as soon as possible. Good luck this week!