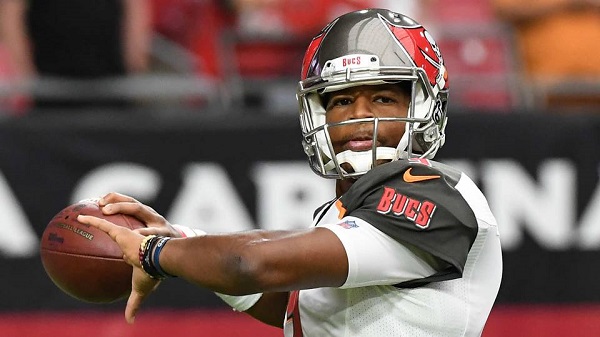 To those of you who went OBJ in the first and Aaron Rodgers in the second round of your drafts: It’s going to be alright. Wait. You took Allen Robinson in the third and Marshawn Lynch in the fourth? Welp. That’s unfortunate. Here’s the rest of the injury news for Week 7:

All Chiefs and Raiders: They’re gonna play tonight. No need to worry, unless you’re Derek Carr and have been struggling all season long. With how last game went for KC, I expect the Chiefs to blow the doors off of Oakland tonight. (With my luck, the Raiders probably win by 24)

Jameis Winston isn’t throwing this week but is “expected” to start. I would bench him if I owned him. He could have a very short leash and they’re going from Arizona to Buffalo (not a short trip) who just came off a BYE week. This is going to be a gametime decision and I don’t like Ryan Fitzmagic as a spot start here either.

Jordan Matthews is ahead of schedule for his hand injury and is looking like he’ll play this week. I’m starting him due to the lack of weapons the Bills have in the passing game. With TE Charles Clay still out, a sneaky sneaky deep league play could be Nick O’Leary. You might have only heard it 192732 times, but he’s related to Jack Nicklaus.

Kelvin Benjamin is on the injury report for a knee issue that’s been bothering him all season long. It hasn’t caused him to miss any time so far, but that could change. This will be a gametime decision and even if he does dress, this is not an ideal matchup. The other insanely tall WR in Carolina Devin ‘Bag of’ Funchess could be a good replacement and should be a WR3 this week for you if you own him.

DeMarco Murray is dealing with hamstring tightness right now and should be only looked at as a risky RB2 this week. He’ll be active, but with his hammy not right, look for Derrick Henry to get a heavy workload.

Willie Snead is also dealing with a hamstring issue. He’s not worth starting this week as the offense has looked pretty good while he has a limited role.

Packer dreams of a Super Bowl. Yeah. So with Aaron Rodgers out for the year, this team will struggle. Ty Montgomery is in pain still but will be active this week. The Saints defense has looked better these last few weeks, and Brett Hundley isn’t going to scare anybody despite being so close to Halloween. Aaron Jones had 13 carries last week and if this becomes a RB by committee, then good luck to Montgomery owners. This offense could get hard to watch real quick.

Leonard Fournette has a sprained right ankle and was cleared before the end of their game last week. He should be active and you have to roll with him if you have him. He’s the only thing keeping this offense from being at the basement of the league. It’s a good matchup too and since the Jags looked bad last week, they could blow out the Colts.

Andrew Luck suffered a setback (shocker) and didn’t throw this week. He should be dropped. Just as a reminder, the Colts 6 years ago didn’t rule out Peyton Manning for the season until December 19th despite everyone knowing he wasn’t playing. He may be taking up a roster spot on the Colts, but he doesn’t need to take up a spot on your fantasy roster. I’ll say it again, he’s not playing this year.

Bilal Powell is still injured after being out last week where the Jets were robbed of a win by the refs. He’s on the bench for me until he’s healthy since E.J. McGuire and Matt Forte are there and getting significant workloads.

DeVante Parker is listed as questionable with an ankle injury. He didn’t practice Wednesday and if he doesn’t get on the field Thursday or Friday, then you should put him on the bench. He’s a great talent but being injured and seeing limited targets won’t help your team.

There is absolutely nobody in the Baltimore WR corps that you should be owning. Just a reminder.

Stefon Diggs still isn’t practicing and is battling a groin injury. My guess is they keep him in street clothes this week and rely on Adam Thielen and Jerrick McKinnon to carry their offense. Those two guys should be owned in every league. It’s clear the Minnesota coaching staff read my post from a couple weeks ago saying that McKinnon was the better back and decided to follow the advice.

We’re close to the John Ross return that nobody was waiting for in Cincy. He could be the thing that sparks the Bengal passing attack (probably not) and if you have the space on your roster, could be a sneaky add. I’m laying off him though as I need to see the consistency on the field first.

Ezekiel Elliott got a TRO on the suspension until the judge in the 5th Circuit comes back from vacation… seriously. I’m going to propose an idea here before the deadline comes: Trade him for 80 cents on the dollar now. Why I say this: This is just fighting the inevitable. The CBA gave Roger the power to suspend him and Elliott fighting now is just altering WHEN he serves the suspension. Now that it’s a lock to possibly eat into playoff weeks, you need to consider whether just making the playoffs is good enough.

Denver WR update: Emmanuel Sanders has a sprained ankle and is already ruled out for this week. We’ll know the extent of the injury once next week comes. Demaryius Thomas has a leg bruise (calf) and isn’t practicing today. He’s fully expected to play though and with no Sanders to steal targets, he should be a high WR2 at minimum this week.

Sterling Shepard should be picked up in every league solely because nobody else will contest him for targets on the outside. There is a chance he doesn’t play this week though with the same ankle issue that kept him out last week against the Broncos. Keep an eye on this one as the weekend rolls around.

Chris Hogan should be able to play with a rib injury.  This should be a high scoring affair in NE against the Falcons. You’re starting Hogan if you own him.

That’s it for this week everyone. If you have any questions or comments, toss those bad boys in the comments section below and I will answer them as soon as I can.