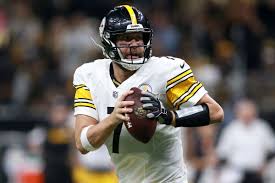 The Pittsburgh Steelers are going to look slightly different in 2019. Not at all because of the uniforms because those will look the same. I’m really digging the yellow writing on top of the black jersey that they have been rocking recently. I hope they drop the bumblebee uniforms that they wear every now and then. There’s nothing worse than Ben Roethlisberger looking like he is about to “pollinate”. Plus, black is a slimming color and Ben Roethlisberger could use that advantage for his appearance.

Pittsburgh is now missing the best wide receiver in football from the last five years, but does it matter? Yes, it absolutely matters and it shakes the team dynamic up for fantasy football. Antonio Brown and his 169 targets from 2018 are now absent along with his weird tirades. Whether his attitude was digestible for his teammates and coaching staff or not, these are shoes (pretty cool cleats at times) that can’t be filled by team-friendly deals for receivers that have “potential”. We’ll get to the receivers later, let’s start with the quarterback.

Ben Roethlisberger attempted 675 passes in 2018. That’s good for the 3rd most in the league and the most that he’s attempted in his career. Last season was also the first time in Big Ben’s career that he has thrown for 5,000 yards. It’s no small coincidence that this was a result from having two elite receivers to throw to. Now, Roethlisberger is left with Ju Ju Smith-Schuster and a bunch of guys that aren’t Antonio Brown. Big Ben is obviously going to regress this season and while his 11th round ADP is reasonable, better late QB1 candidates such as Philip Rivers and Jameis Winston are going just one round earlier. Hell, I think that I’d rather take a shot Kirk Cousins and he’s going a couple of rounds later than Ben.

J2S2 in the second round is a fantastic value. J2S2 looked like the best receiver on the Steelers last year and he was rewarded with 166 targets, which should either increase or stay around the same with the departure of Antonio Brown. There could be a bit of concern that defenses could clamp down on J2S2 without having to worry about AB in the offense anymore and that is a factor. However, based solely on volume and targets that he should get in the red zone, these concerns can easily be nullified. Double-digit touchdowns is never a realistic floor, but coming into this season, can you reasonably project less than 10 touchdowns? If all goes well, you better believe that a 1,500 yard season is in play.

The Rest of the WRs

Diontae Johnson is one of the rookies to watch this year. He’s short, but explosive and could have a big role for the Steelers if he’s able to continue to produce in training camp like he did during offseason programs. I won’t dare make any comparisons to Antonio Brown just because of his build and speed.

Outside of J2S2, Donte Moncrief is probably the safest bet to make a fantasy impact within this wide receiver group. That doesn’t mean that I want to draft him though. Moncrief is coming off of his 2nd most productive season as a pro and he only accumulated 48 catches, 668 yards, and 3 Tds. At the point in the draft where Moncrief is going, I’m personally trying to hit home runs with my picks, not bloop singles.

James Washington is the home run swing on the Steelers. He has yet to produce in his career, but the talent is there. Washington struggled in his rookie season but he did manage a couple of receptions over 30 yards. If he can make a big leap, he could become a difference maker in fantasy football.

Vance McDonald is a decent choice in fantasy drafts if you ignore tight ends for a while. If you’re a believer in “the production has to go somewhere”, then McDonald might be the guy for you. He did have a nice uptick in yards, catches, and touchdowns last year, but I hope that he wasn’t in your starting line up every week.

James Conner is a tackle breaking machine. He was 1 of 3 running backs to break at least 50 tackles through the first 12 games of last season. His season was cut short because of an ankle injury and that injury just so happened to occur RIGHT BEFORE the fantasy football playoffs. Brutal.

James Conner scored 13 rushing touchdowns in an offense that thrived on Roethlisberger playing huck it, chuck it football. Conner also caught 55 passes for over 500 yards out of the backfield. There are mumblings of a RBBC in Pittsburgh and I think it’s rubbish unless training camp spells it out in ink. I think that Conner touches the ball 275 times if he plays 16 games. That still leaves room for Jaylen Samuels to have involvement in the passing game in some aspect and Benny Snell might even get some touches. But if Conner is available for the Steelers every week, I believe that he is a bell cow. If you like your fantasy writers to put their money where their mouth is, I took Conner with the 8th overall pick in my SFB9 draft yesterday.