Sometimes I just take for granted that whatever Average Draft Position list I am looking at, is going to be somewhat similar to the other ADP lists, but of course that’s not the case.  A lot depends on how many live participants there are in the mock drafts they take their numbers from.  That autodrafter, besides making you want to quit your mock, is giving out a lot of craptastic data.  So with some prodding from QBreezy I decided to do a little comparison of some popular ADP spots.

For this experiment I chose to look at three ADP sites, ESPN, Fantasy Football Calculator, and Mock Draft Central (check their aggregate ADP).  Mock Draft Central’s numbers are a little limited since they only give full reports to paying customers (and I don’t pay!), but they will still fit our purposes.  I’m just going to point out some of the more disparite rankings. On to the disparation.

But first! You should check out Razzball contributor Lawrence’s NJFFL dynasty draft which will be Live on U-Stream July 31st at 4pm eastern.  It should be fun and you can ridicule their picks live and see their reactions all from the comfort of your very own barcalounger!

Justin Forsett: ESPN – 80.7, FFC – 62.5, MDC – 115.31: Forsett has been the focus of a lot of ‘perts argumentation and these numbers show that.  If you on board the bandwagon I think even 62.5 is a decent spot to get him, so these numbers are good news for us who can see the Forsett for the trees.

Ben Tate: ESPN – 91.5, FFC – 68.1, MDC – 58.54: Tate’s stock has been falling to a point that he can probably now be had at some value. The more we hear about Slaton being healthy and Foster getting first team reps, the more people will wonder about Tate and if his early draft status is worth anything.  Well, it is.  They may go slow with him, but there is a very good chance he will transition into the main back.

Kevin Kolb: ESPN – 94.7, FFC – 65.4, MDC – 80.24: You can see that most of the players with wide variations in ADP are those that have some questions surrounding them. Kolb has yet to play a full season, but is being touted as a top 10 QB (by crazy folks like me).  So it is easy to see why his ADP is all over the place.  If you want him I guess heading over to ESPN might be a good idea!  But I think the disparity just makes it more difficult to wait on him, because you know he could go in the 5th round without much incompetence involved.

Malcom Floyd: ESPN – 124.5, FFC – 88, MDC – 104.09:  If you are in a knowledgeable group I doubt you’ll get Floyd as late as ESPN has him.  Everyday it looks more likely that Vincent Jackson won’t be playing much football this season and the more that starts to sink in, the further Floyd’s ADP will rise.

Jahvid Best: ESPN – 65.8, FFC – 52.1, MDC – 37.43: I am a Best backer, especially in ppr leagues.  I would be extremely happy getting him 65th overall, but I don’t see that happening too often.  The more we go through these, the more ESPN is coming out smelling like rotten yogurt.

Devin Aromashodu: ESPN – 138.2, FFC – 81.3, MDC – 84.95: So, who is the man in Chicago?  These numbers aren’t going to tell you and I kind of doubt Mike Martz will either.  I was high on Aromashodu until Martz kept Hester out wide and named Knox the #2 during OTAs.  Knox is probably more skilled than both Hester and Shodu, but Cutler does like Shodu in the red zone because of his size.  Hester probably would work better in the slot, but with the money they are paying him they want him showcased out wide. I have a feeling he’ll be in the slot by mid-season. All three have a different skill set and can all be on the field at the same time in Martz’s system, so I’m not giving up on any of them.  Which means I won’t mind grabbing whoever falls the furthest in drafts.  I think they’ll all put up ok numbers with each having a lot of upside.

Tashard Choice: ESPN – 141.1 FFC – 152.4, MDC – 180.63: I find it odd that Choice is lasting so long at Mock Draft Central.  With Barber and Jones both fairly injury prone and Choice productive when he has had a shot, I see no reason to not grab him as a backup late.

Arian Foster: ESPN – 135.7, FFC – 144.4, MDC – 201.53: Competing with a rookie and a neck fusion something or the other-victim, means that Foster has a shot at starting week 1 on a good offense.  He could easily be a great bait and switch candidate if he can start and have a couple good games early on.  Tate will get his shot at some point and if you can get some trade value out of Foster I’d do it.  201.53 is crazy talk.

Now let’s take a look at some of the players with the closest consensus rankings.  It’s funny how Percy Harvin is so stable at 56th overall when my thinking goes back and forth on him.  You can take a look for yourself.

As a side note, I can attest to being susceptible to group think, and these numbers make me think that us fantasy footballers are once again in that mode.  If we take a player too early we are laughed at (by me at least) and we don’t want to be laughed at or feel like we screwed ourselves so we are always trying to stay within the norms, which is what ADP is all about.  Always remember that you have to look yourself in the mirror Sunday evenings and own your own picks.  It is your team, your pride and your money on the line.  Make sure you follow your gut. 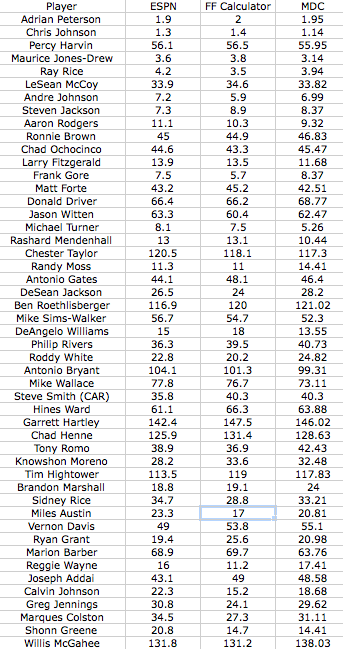