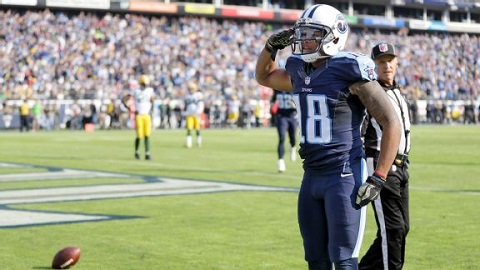 We mocked the Tennessee Titans all off-season. First, when they decided to retain Mike Mularkey as their full-time head coach, we all shook our heads. Not up and down, but side to side. Then Mularkey unveiled “exotic smashmouth” to the world. What the Mularkey??!! DeMarco Murray was signed as a free agent, but then they drafted Heisman running back Derrick Henry in the second round of the NFL Draft. Que? Before the season started, they traded physcial freak, Dorial Green-Beckham to the Eagles for an offensive lineman. What?! Que?! Huh?!

Matthews played four seasons for the Miami Dolphins and had a high of 43 receptions and 662 yards in a season. He scored a total of eight touchdowns while down in Miami. Kyle Pollock of Rotoviz wrote an excellent article regarding Matthews, showing that his 2015 campaign was super efficient and that he was on the verge of a breakout season, before an injury derailed his season.

During the preseason, rookie Tajae Sharpe was receiving all the hype, due to his play. He looked good and the hype was warranted. During the Week 1 game against the Vikings, Sharpe caught 7-of-11 targets for 76 yards. Matthews? Three receptions on four targets for 26 yards. Things started to change after Week 1, though. Like an aircraft carrier trying to change directions, the immediate signs were not apparent. Sharpe was still out-targeting Matthews for the next few weeks, but the production for Sharpe began to slowly dissipate. Then Week 5 hit. Matthews caught 4-of-4 targets for 32 yards and a touchdown. Nothing spectacular, but that started a run in which he scored six touchdowns in the next six games. Sharpe scored once.

Things came to a crescendo last week when Matthews caught 9-of-13 targets for 122 yards against the Colts. Since Week 5, here are the numbers for Matthews and Sharpe:

Now, I realize that most owners won’t give any value for Matthews, so I’m not necessarily advocating trading him away. If you can, that’s great. My main motivation is to lower expectations for Matthews going forward. The Week 12 matchup against the Bears is a decent one, but after that, there’s a bye in Week 13 followed by the Broncos, Chiefs, Jaguars, and Texans. Below are the pass defense rankings according to Football Outsiders utilizing their DVOA (defense-adjusted value over average) metric.

Matthews is a good player. There’s a reason why the Titans felt comfortable dealing away Green-Beckham. They knew what they had in-house. The issues are that the Titans are not a high-volume passing attack and the pass defenses that they face to conclude the season are all tough.