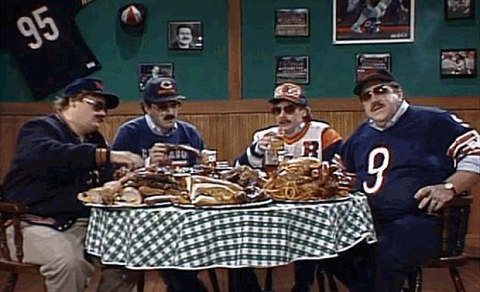 Da bears are a joke. No B for you! They are 2-9 on the season and have only scored 178 points all year! The Lambs have scored 170? Geez. Only three other teams have failed to crack the 200 point barrier. Maybe they are playing on All-Madden while the rest of the league is on Pro. Forget about recounting votes for Hillary! I demand an audit of the NFL to check the gameplay settings! Actually, scratch that. They just suck.

So why the hell am I devoting my precious time and energy to Da bears this week?

For starters, the other great writers at Razzball got you covered on the main guys out there. Go check them out. I highly recommend it.

Disclaimer: Razzball did not pay me to write that, nor did they pay anyone in my immediate family for that endorsement. Pssst, Jay and Grey….all good?

I try to touch on the players that are a little off the reservation. Mission accomplished for sure this week. Achievement unlocked.

Finally, I wanted my loyal readers to be a part of history. Drum roll please… For the first time in Razzball Bear or Bull history, I will talk about not one, not two, but three players! Maybe four. I can see my followers gathering now. Yeah, I feel you.

So, I’ve been told that the NFL is a quarterback league. If you ask fans of the Texans and Broncos right now, you’d probably get different answers. Personally, I’m of the opinion that the position is pretty important. Look at the quarterback situation for Da bears this year. Jay Cutler started the season, sucked, got injured, then was replaced by Brian Hoyer, who was good, but then got injured, was replaced by Matt Barkley in-game, who sucked, then Cutler returned, sucked AGAIN, got injured AGAIN, which led to Barkley getting another start. Whew. I’d say that contributed some to Da bears 2-9 record.

This is a fantasy site so, as awful as Da bears offense has been this year, the quarterback position was able to finish as a Top 10 option in four weeks. Hoyer did it three times and Barkley just went 28/54 316 yards 3 TD 2 INT to finish as the #8 fantasy quarterback for Week 12. I just puked, swallowed, then puked that out.

A quarterback cannot be successful unless a receiver or receivers is successful. I guess it’s theoretically possible that someone could receive the snap, chuck it into the air, and catch his own pass. Jamaal Charles did it. Maybe that’s why his knee got all messed up and is the reason no one else does it. Hmmmm. Nice editing in that video, by the way. Anyways, to get super technical, if one was able to throw the ball to himself, then that person would be both the quarterback and the receiver, so my first sentence would be false. What the hell am I doing right now? If I go down to the local marijuana depository and show them what I just wrote, they would have to hook me up right? Or would they say “didn’t you have enough?” Anyways, during Barkley’s start, Marquess Wilson caught 8-of-11 targets for 125 yards with a touchdown. Cameron Meredith caught 2-of-9 targets for 19 yards. Jordan Howard, who I will expound on later, caught 3-of-5 targets for 43 yards. The point I was trying to make, before I was rudely distracted by myself, was that if a quarterback finishes as a Top 10 fantasy option then some receivers will be fantasy viable options as well.

Wilson is the darling of the week and may be a popular waiver wire add. He seemed to have gotten the apple of Barkley’s eye. Just be aware that he only played 47 snaps, which was 59%. He may get more snaps going forward due to his performance in Week 12, but that is still an unknown at this time. Meredith, on the other hand, played 69 snaps (86%) and received nine targets. He just wasn’t able to convert. With no Alshon Jeffery, Meredith is the “#1 receiver” for Da bears, so the opposition’s best cornerback will probably be on him. That could explain the low productivity last week. I really don’t know which one to choose, so I’ll go with the guy that plays more, but the performance by Wilson cannot be denied. This is a situation worth monitoring because it is so fluid and can reap some nice rewards.

Good quarterback play usually opens up things in the run game, as defenses cannot stack the box. That brings me to Jordan Howard. I told ya I was going to get to him. My momma didn’t raise no liar. This is what I wrote about Howard during the preseason, so I definitely have a positive bias toward him. Howard has balled this year. It took some time, but he is the bell cow for Da bears. 149 attempts for 766 yards (5.1 avg) with 22 receptions for 242 yards is really good, considering he didn’t start every game and Da bears are not very good. You also have to consider the bouts of ineptitude from head coach John Fox as well.

Have you checked out the upcoming schedule for Da bears? San Francisco, Detroit, Green Bay, Washington, then Minnesota (Week 17 so doesn’t matter for most leagues). If that doesn’t mean anything to you, then check out the below chart. DVOA is a Football Outsiders metric. For a detailed explanation, click here.

The next four weeks are juicy, right in the heart of the fantasy playoffs. A popular fantasy football cliche is always start your studs. I’m not so sure about that. More often than not, it’s probably the wise choice, but I think that cliche is more about peace of mind. There are times when the matchup dictates to go in a different direction. For example, say Julio Jones will have Patrick Peterson on him. You are probably playing Jones and he could go off, but it’s within the likely scenario of outcomes that Jones has a pedestrian day. For those situations, I present to you the craziest and unlikely fantasy football playoff performances (courtesy of Sporting News).

Da bears suck, Matt Barkley sucks, but so does their defense. In an ideal world, Fox would like to pound the rock 30 times and throw it in the mid-20s, but I don’t think that’s going to be possible. Barkley, most likely, will continue to play and have to chuck it. Could he throw five interceptions in a game? Definitely within the scope of outcomes, but you just saw what he did in Week 12. The schedule is about as ideal as one could ask for. That probably means it’s going to snow with 40 mph gusts of wind for the remaining games, even inside the dome in Detroit.