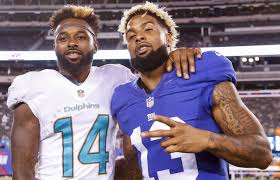 The Odell Beckham trade changes everything about the Browns offense. I can’t emphasize enough how big of a deal this is. The Browns paid a hefty price for the 26-year-old super star receiver, but Beckham should be the catalyst for this wide receiver group and Baker Mayfield to take them to the next level. The Giants got a nice return for Beckham (2019 17th overall pick, 3rd round pick, and Jabril Peppers), but it’s a bit confusing considering that the Giants had just locked Beckham in to a long-term deal seven months ago. Not that the Giants plan on competing in 2019, but they are also on the hook for over 16 million dollars of Odell Beckham’s 2019 salary. The Giants will be in full rebuild mode for what most expect to be Eli Manning’s final season with them. 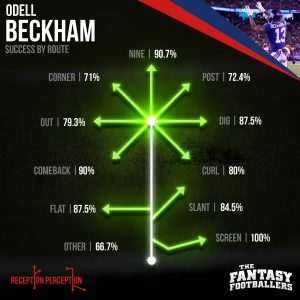 This chart is courtesy of the great Matt Harmon who calculates the success rates by route as you can see in the top left corner of the graphic. This was from 2018 and is the second best season recorded according to these metrics. Who has the first? Glad you asked. It’s also Odell Beckham in 2014. What can you take from this? Odell Beckham is an incredible route runner that has a very high success rate of getting open. Outside of this, he put up ELITE counting stats while healthy during his stint with sub-par Eli Manning. From 2014-2016 Odell Beckham had at least 90 catches, 1,300 yards, and double-digit touchdowns in each season. In just 12 games last season, Beckham had 77 catches and over 1,000 yards. Beckham has had some tough luck with his health in the past two seasons but it doesn’t raise any red flags for more me going forward in his career. I don’t want to seem reactionary. I truly believe what I am about to write. I will probably have Odell Beckham as my #1 wide receiver when I start taking a close look at rankings. This might make more sense to naysayers in the Baker Mayfield portion.

Baker Mayfield was dynamic in his 14 games as the Brown’s quarterback. If he would’ve played 16 games, he would’ve cruised past 4,000 passing yards and probably would have had 30 passing touchdowns instead of 27. The Odell Beckham acquisition locks Mayfield into a top 5 fantasy quarterback and I wouldn’t be surprised if I rank him as the QB2. According to Matthew Berry and/or the ESPN stats team, after Freddie Kitchens took over the Browns offense in week 9, Baker was 2nd in the NFL in YPA and deep attempts per game. Mayfield also led the NFL with 4.75 deep completions per game. As you can tell by the Reception Perception graphic, Odell is very good at running deep routes. We’ve also seen the highlight reels, he has pretty good hands as well.

You can add on the prospect of play action passes with the dangerous Nick Chubb in the backfield and the eventual return of Kareem Hunt who is a great receiving back. You can throw in some Duke Johnson packages if they don’t trade him. Let’s not forget Jarvis Landry and the potential that he has. Jarvis should be able to find space on the short passes that he excels at. David Njoku is also entering the 3rd year of his NFL career and he continues to make strides as a pass catcher.

I assume that the Giants won’t spring for a wide receiver or a tight end in the first round of the NFL draft. This is a team with a lot of needs. on BOTH sides of the ball. This makes Evan Engram and Sterling Shephard quite interesting values next season. In the final four games of 2018 (Odell Beckham sat out) Evan Engram posted double-digit PPR scores in each of these games. In the final 3 games of last season, Sterling Shephard averaged 18.5, 18.8, and 16.5 yards per reception respectively.

As for Saquon Barkley, I think that the detriment to his value without Odell Beckham will be overblown. “Stacked boxes” are a scare tactic to the fantasy player when in all actuality, a stacked box makes it easier for Barkley to break a long run if he gets past the defensive line and the linebackers. I can’t think of a more obvious choice for a running back that can break off a big run at any time. In the final four games of the season without Odell Beckham, Barkley had at least 20 fantasy points (PPR) in 3 out of 4 games.