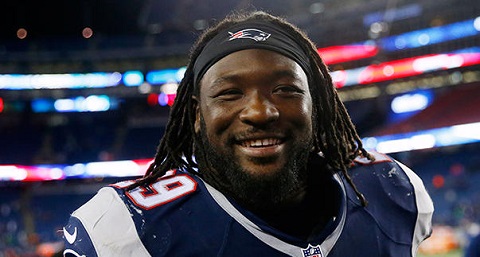 LeGarrette Blount – There are two things I don’t trust about the Patriots, the offensive line when Dante Scarnecchia isn’t coaching and consistent running back usage. If you thought I was going to say properly inflated footballs, shame on you, because that never even happened. I am required to say I took no money in linking that page (but if a footlocker higher up is reading please feel free to hook me up). Anyway, let’s get on to important things like fake points. Blount’s been steady for you all year, and I don’t see any reason to turn your back on the guy that got you where you are. Even against one of the best rush defenses in football. Start him as a high end RB2 with confidence.

Malcolm Mitchell – I forgot there’s one more thing I don’t trust about the Patriots, and that’s rookie wideouts. I’ll have to make an exception in the case because Mitchell looks great. He also has somehow found the trust of Brady, which is harder to earn than Top Secret clearance. With top option Rob Gronkowski out, next tight end up Martellus Bennett hurting, and next next man up Danny Amendola out, Mitchell looks like he has the inside track to worthwhile fantasy numbers. He’ll be a back of the pack WR2 with upside for more as long as the other options remain ailing.

Matt Forte – It’s nice when a recently struggling player has matchup that just screams start me. Although his recent outings have caused some pause, he’ll be a no brainer play against everyone’s favorite team to bully, the 49ers. Yeah, I already know what you’re asking; won’t Bryce Petty hurt Forte’s value since San Francisco can now focus on run defense? Just take a look at last week where Jordan Howard led all running backs in fantasy points with Matt Barkley starting. MATT BARKLEY! What I’m saying is that Forte’ll be fine, and more importantly, worth starting as an RB1. If anything I actually see his value rising with Petty starting, as I have a feeling quite a few screens will be coming his way in the form of checkdowns.

Doug Martin – Unlike Forte’s situation where he’s begging to be started, Martin’s giving me a ton of concern even against the Saints defense. It’s easy to just look at the Saints stats against running backs and see that they’re third worst on the year, but check out recently and they’ve tightened things up the past four weeks. Pair that with Martin being called out by OC Todd Monken for leaving yards on the table and you’ve got yourself a reason to worry. Averaging less than 3 YPC may have worked for Melvin Gordon in the past this year, but not so much in Martin’s case. Charles Sims and Jacquizz Rodgers are waiting in the wings to steal some work, which leaves Martin sitting on the RB2/RB3 border to me.

Devontae Booker – Terrible news for fantasy owners recently broke, as Justin Forsett signed with the Broncos. I know Denver had to sign someone since Kapri Bibbs got hurt, but Forsett is probably the worst possible addition to Booker’s value. Most reports have Forsett getting the same workload as Bibbs had before he went down, although I expect it to be even more with his intimate knowledge of Gary Kubiak’s system and fresh legs. It’s tough to sit a guy that has been getting 20 carries a game, but just ask Todd Gurley’s owners if they regret starting him last week. Booker is no more than an RB3 with workload concerns and facing Tennessee’s tough run defense.

Davante Adams – After a dud week 13 do you really think you can trust him against the sound Seattle secondary? I hope the answer is yes because he’s one of the highest upside WR2s in football. That is even against a very capable, albeit Earl Thomasless, Seahawks defense. The Packers may be forced to run the ball more than in previous weeks again due to the harsh wind and weather, but don’t let that deter you from firing up Adams in your lineup. He still had 7 targets last game with an average depth of over 20 yards. There’s just too much upside to bench him.

Carlos Hyde – The Jets have literally one thing to be happy about this year, and that’s how good their rush defense has looked. That still shouldn’t deter San Francisco from riding Hyde like he’s their offensive weapon. Let’s be real though, that’s because he IS their only offensive weapon. You know unless you’re counting their leading receiver, Jeremy Kerley, who has a staggering 466 receiving yards on the year. Normally you’re used to hearing “staggering” as a complimentary term, but not so much in this case. I think it’s actually historically bad. But enough of this tirade on the 49ers horrendous receiving options and back to Hyde. He’s viable RB2 with his solid rushing efforts recently and continued workload.

Cameron Brate – Here’s a tight end for all the people that have to make do without one of the elites on their roster. Brate’s been on my TE1 radar for the better part of the year and deserves a little bit of recognition. With two games against the Saints on the horizon, he’ll be one of the best options at tight end during the fantasy playoffs. If you’re the owner of inconsistent options C.J. Fiedorowicz or Jason Witten, or are still mourning Gronk’s injury, check the waiver wire and hope you find this guy. He’s still available in about 40% of leagues.

Brandon LaFell – Like a few of the guys I’ve already written about, LaFell is another guy that’s gained relevance from being his team’s last man standing. Don’t hold that against him though, Cincy’s losses at wide receiver can be your gain if you need the help. Expect LaFell to once again lead the team in targets and receptions, especially this week against the Bad News Browns (I think they’ve earned that title). If you need help at the wide receiver position, he’s as plug and play as they come as he’s owned in less than a quarter of all leagues.

Thanks to everyone who joined on a weekly basis and trusted me with your questions as part of my first season with Razzball. Good luck in the playoffs, and I’ll see you guys next year.