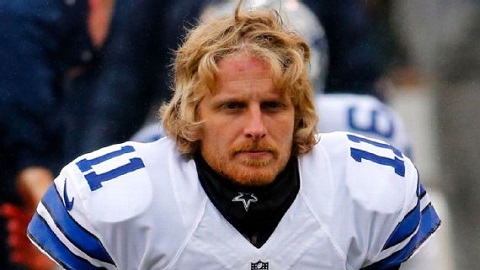 Is your fantasy team so bad you’re already thinking of blowing it up with some crazy trades? Do you tune in to Monday Night Football just in the hopes that your kicker will get you 23 points for the win? Are you tired of your fantasy football team being first thing to screw you each week? If that describes you, or you’re just a really hot chick, I’m here to help with week 4’s edition of Beyond the Numbers! This week, I’ll give you a few names you can pick up on the waiver wire and some to target in trades before they blow up. Let me start off slow first, with a player who’s one of the smallest in the NFL, but is big enough to satisfy where it’s counts… on the stat sheet.

Cole Beasley – Some of you may be in the same precarious situation as I am in a few leagues, rostering Jordy Nelson, Jordan Matthews, and Sammy Watkins. It’s been solid enough so far, but now you’re in desperation mode due to bye weeks and injuries. Plus, you’re in a league where the waiver wire is so thin, the likes of getting Anquan Boldin could be lauded as a thought provoking pick up (sadly, no joke, see below). This is where fun sized wide receiver, Cole Beasley, can help you with your problems. It’s hard to make the comparison to one of my favorite players in the NFL, but Beasley reminds me of a smaller, albeit less agile, Julian Edelman. Smaller of course being an understatement, as Beasley sports a 174 pound frame and is one of the NFL’s 10 smallest players. That’s where the big differences stop, though. He’s got a knack for getting open in the slot with great route running and has an unrelenting motor after the catch. With Dez Bryant set to be slightly hobbled this week, if he even plays, Beasley’s moderate floor and ceiling get a bit more intriguing. He’ll never be a deep threat, but he does what he is asked to do extremely well; create separation and catch a ton of balls. That’s why he’s this week’s best flex option available on waivers for desperate owners.

Anquan Boldin – I’m going to be honest, I’m sitting here thinking of nice things to say about Boldin, but nothing really spectacular comes to mind.  I think it’s great he’s catching nearly 70% of all his targets, but the 105 receiving yards from scrimmage through three weeks leaves quite a bit to be desired. He’s on my radar this week simply because Detroit is playing the comically bad defense of the Bears. Well, that, and I’m clearly extremely desperate at wide receiver. There are many great options before Boldin, but if you’re in a pinch, I think he’s a pretty good bet to extend his touchdown streak this week.

Kenneth Dixon – He may come from a small school in the middle of nowhere (both at high school and college levels), but he’s going to prove why he belongs in the NFL. You’ve got to trust me on this one; I have a little bit of inside knowledge since we share an alma mater. This is an athlete that played in the WAC and set the NCAA freshman record for rushing touchdowns. Yes, that’s the entirety of NCAA history, not simply a school or conference record. But enough of his accomplishments from when fantasy points weren’t involved, what’s he going to do for me this year? It’s going to be around week 6 or 7 before I can see him getting enough carries to warrant putting him in your starting lineup, but he’ll definitely be given an opportunity to walk away with the workhorse role. Jim Harbaugh is already complaining about how terrible his running backs are, and for good reason. Through three weeks, the Ravens only have one rushing score on the books, and that was from Joe Flacco. Justin Forsett and Terrance West have combined to average less than 3.4 yards per carry, and the only other back higher than him on the depth chart, Buck Allen, has been a healthy scratch every game this season. Dixon’s ownership is hovering around 15% right now, but should be owned in all leagues. As a running back on a team that likes to run the ball, he’s a better stash than the one you got in your bottom drawer.

Kirk Cousins – I don’t really like to talk about quarterbacks very much, since if you’re in standard leagues, there’s a ton of parity between the top 8 and 15. This makes it really easy to say just drop Eli Manning and not be too afraid of what’s left out there on the waiver wire. I’ll make a special case for Cousins though, as I was extremely high on him this offseason and he hasn’t even cracked the top 10 in weekly scoring. A closer look at him tells me nothing is wrong, and that he could easily be a top a top 6 quarterback for the rest of the season. Sure his first couple games were a bit shaky, but he’s second in the league in passing yards and just isn’t getting enough touchdowns. Hell, Jamison Crowder is leading the team in touchdown receptions, and Jordan Reed has none. I think it’s a good bet Reed’s and Cousin’s touchdown struggles are going to change this week against the lowly Browns defense, and hopefully it’ll give them the jumpstart they need. Keep Cousins locked into your weekly lineups, or grab him in a trade, and look for some monster games to come. And because it’s literally impossible to write about Kirk Cousins without asking, DO YOU LIKE THAT?

Wendell Smallwood – I’ve got a fun little trivia question about this guy… What’s his middle name? I’ll give you a hint, it’s four letters and not exactly “manly”. If you guessed “Gots” you’re wrong, but congratulations, you’re my target audience. The actual answer is “Lynn”, and if you knew that, feel free to skip to the next write up since you clearly know more about him than I do. I know he’s getting a ton of love everywhere, and that’s because it’s hard not to talk about a guy who goes from 3 career touches to 20 in one week. It may also have to do with the fact that the always injured Ryan Matthews is ahead of him on the depth chart. Matthews is not exactly the six million dollar man; we, in fact, do not have the technology to fix him. Take a look at his injury history and it’s easy to see he gets hurt more than Wile E. Coyote. It does leave me a bit concerned that he’ll be sharing so many touches with Darren Sproles and possibly even Kenjon Barner, but even so, I still think he’s a worthy pick up as a handcuff. He’s got a ton of upside when Matthews does get hurt again, and if nothing else, you can rename your fantasy team “I’ve Got Smallwood”.

Jordan Howard – I wrote about him last week and wanted to finish this article with a bit of an update. Everyone who was lucky enough to grab him has been rewarded with a freshly minted starting running back due to Jeremy Langford’s high ankle sprain. The Bears just signed Joique Bell, but I wouldn’t worry about him taking many carries away from Howard; he’s merely a depth addition on a team with a dangerously thin running back corps. In Sunday night’s game, it was exciting to see Howard’s first carry go for 36 yards, but frustrating after he got stuffed at the line time and time again. He also noticeably whiffed while trying to pick up a third down blitz on one occasion. Something really encouraging I saw, however, was that he caught quite a few passes out of the backfield. The Bears are in a battle royal with New Orleans and Cleveland Browns for worse defense in the league, so it’s nice to see that Howard has the ability to accommodate the need for a passing down back. Although there was room for a better performance, I definitely think he’s worthy of starting this week against the Lions, as he seems like a pretty versatile part of the Bears offense.

Thanks for tuning in again. Hit me up with any questions below and make sure to check out next week’s Beyond the Numbers!