Over the course of the off-season we’ll be looking back at some of the major players who ‘broke out’ or outperformed their ADP by a drastic amount in the hopes that we can get a feel for what their 2013 fantasy football season holds and whether the break out is here to stay.  Today’s review subject is C.J. Spiller. 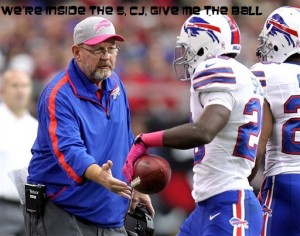 During one of our Razzball Writers Meetings, someone suggested that we cover Spiller’s breakout season. To be fair, we all kinda knew Spiller had it in him for this type of season based on the end of 2011 when he filled in for an injured Fred Jackson to the tune of 124 fantasy points in 6 games, good for a 20. 6 FPPG average.  Of course, it’s not a question of skill with CJ’s skill, it’s more a question of the coach’s.  Though I don’t fault the coach for wanting to keep F-Jax as a part of the game, the fact is Chan should’ve played the hot hand more than going with a straight 50/50 split.  Some weeks it was clear that Fred didn’t have it and CJ did yet he’d still get 15 plus touches.  It was annoying for Spiller owners to say the least.  But enough of that, let’s breakdown CJ’s break out 2012 and see how it’ll translate to 2013 fantasy football…

Weeks 1-4: 460 yards, 50 touches, 10 targets, 4 touchdowns, 70.5 total points – Jackson went down quicker this year (i.e. the first game of the season) and by week 1, we already had a season-changing waiver pick up or draft flier turn into a dominant force.  Spiller totaled 194 yards week 1 to go with a touchdown week 1 and followed that with 170 total yards and 2 touchdowns the next.  Of course, as any Spiller owner knows, this wasn’t a dream season all the way.  CJ left week 3 with a shoulder injury which became a major worrying point.  F-Jax was on the mend and Spiller’s pass-catching abilities were thought to be hampered by the shoulder issues.  What would Spiller’s role be upon return with F-Jax around if he couldn’t catch passes?

Weeks 5-9: 338 yards, 52 touches, 17 targets, 1 touchdown, 47.3 total points – During this rough patch that really started weeks 3 and 4, there were plenty of sell calls.  Fred was back, CJ was ailing and Gailey was a bit of a knucklehead anyway.  Little did people know this 4 week stretch would be the last time until week 14 that CJ would be held under 10 fantasy points.  During this span, Spiller faced 3 top 10 finishers for fantasy defenses – San Francisco, Houston, and Arizona – but still managed an 11.8 FPPG average.

Weeks 10-13: 448 yards, 71 touches, 12 targets, 1 touchdown, 55.3 total points – It was during this stretch that Chan’s genius was fully revealed.  With Fred Jackson unable to go for the Thursday Night Football game on November 15th against the Dolphins, many assumed we’d finally see CJ get a shot at the goal line.  For the most part, it had been F-Jax at the goal line when healthy.  Anger cannot describe the feeling of Spiller owners as they had to watch Tashard Choice get stuffed at the goal line multiple times in a game that CJ produced 130 total yards and got his team in scoring distance multiple times only to watch them fail from the sidelines.  Is anyone surprised that Gailey was fired yet?

Weeks 14-17: 457 yards, 80 touches, 18 targets, 2 touchdowns, 60.7 total points – After only gaining 30 yards against the Rams, F-Jax didn’t play another game on the season and it was back to the full time CJ show…of course with still the occasional Choice at the goal line sprinkling from master chef Chan but that’s besides the point.  Spiller yet again faced three top defenses – the aforementioned St. Louis, Seattle, and Miami who’s tough against the run – but Spiller proved more than capable during the span, finishing with over 100 total yards in each of his final 3 games.

Conclusion: The talent says the breakout is here to stay.  Obligatory.  The new coach has already stated they’ll split carries in 2013 so the breakout might just stay how it is and not expand.  Frownieface.  To even further that, we have no idea who’s going to be the QB next year.  Not that Ryan Fitzpatrick was great but familiarity is useful when trying to gauge players.  But after all that, I say to heck with it all: more explosive than my bowel movements after spicy Thai food, Cruise Juice Spiller is here to stay.  If he can garner at least 275 touches next year, the line below is what CJ will Spiller onto his fantasy owner’s teams for 2013 fantasy football.