Over the course of the off-season we’ll be looking back at some of the major players who ‘broke out’ or outperformed their ADP by a drastic amount in the hopes that we can get a feel for what their 2013 fantasy football season holds and whether the break out is here to stay.  Today the review subject is Dez Bryant. 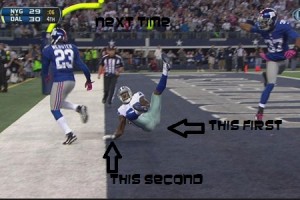 Honestly, if I’d heard the words ‘break out’ and ‘Dez Bryant’ in the same sentence coming into the 2012 fantasy football season, my first thought would’ve been acne or that he finally got jail time.  You see, Dez was known as a bit of a problem child heading into the 2012 fantasy football season.  I could give you links galore but the reality is you can google ‘Dez Bryant Legal Problem’ and can pull stuff back over the last 3 years yourself.  Its my off-season, I can be just as lazy as you.  Let’s just say that Bryant knows about as much as Robert Downey Jr. does when it comes to the law with the only major glaring difference is Robert Downey Jr. was a bad-ass heading into 2012.  Seriously, RDJ as Iron Man Tony Stark…I don’t just love it, I LURV it.  And before you ask ‘what is LURV?’, realize you’re asking me to post this so keep it to yourself.  But enough about one of my most favorite actors of all time, let’s take a look back at Dez Bryant’s 2012 season, what made it a break out and whether or not we see it staying for 2013.

Weeks 1-4: 21 rec, 33 targets, 269 receiving yards, 0 touchdowns, 37.4 total points – To say Dez’ season started slow would be an understatement.  Bryant averaged 9.35 fantasy points per game during the first 4 games of the year.  Games which featured two of teams – NYG and TB – who aren’t known for stopping opposing wide receivers.  If Dez kept this FPPG pace, he would’ve finished more like Jeremy Kerley than a top 5 wide out.

Weeks 5-9: 21 rec, 33 targets, 234 rec yards, 2 touchdowns, 45.9 fantasy points – Well it was a little improved in the FPPG with 11.475 but looking at the underlying numbers of receptions, targets and receiving yards, the actual break out still feels far away.  Somehow after finishing week 4 with his best game of the season to date vs the Bears of all teams, he followed it up with what would be his third best game of the season against a tough Ravens secondary and later a decent game against the Giants even with the missed TD opportunity referenced in that picture.  The issue with those three great games were having only 29 yards in the other two games.  The consistency still wasn’t there.

Weeks 10-13, 29 rec, 37 targets, 475 rec yards, 6 touchdowns, 98 fantasy points – In looking back, this was the start of the break out but the receptions and the targets barely moved an inch from his previous two 4 game stretches yet he nearly doubled his yardage output and tripled his touchdowns on the year.  During this stretch he got to face the Eagles secondary twice which greatly aided the cause.  The Eagles only had 8 interceptions on the year, 4 of which came in the first game of the year and after firing defensive coordinator Juan Castillo during the bye week, they went on to give up a 26:1 TD to INT ratio to opposing quarterbacks.  Needless to say, if Dez didn’t perform well in this stretch along with a week Redskins secondary in the mix, we wouldn’t be talking about him right now.  He averaged 24.5 FPPG during this stretch and was at least looking like a good red zone target for Romo moving forward.  Interestingly enough, around mid-November is when his mother dropped the assault charges on Dez.  Coincidence?

Weeks 14-17, 38 rec, 62 targets, 623 rec yards, 3 touchdowns, 99.3 fantasy points – Sure, a lot of the damage was done in one game – 9 catches for 224 yards and 2 touchdowns against New Orleans – but keep in mind that Dez is playing with a broken index finger since the first game of this stretch and he still produces 24.825 FPPG to finish out the season.  And that doesn’t even take into account him only playing half a game against the Redskins to end the year once he also hurt his back.  I have to say given the underlying factors, this is easily the most impressive stretch for Dez during his 2012 fantasy football campaign.

Conclusion: His season truly was about second halves both in terms of the year – nearly 200 of his 280.6 fantasy points came over the last 8 games – and his in game stats: almost 60% of his fantasy points were scored in the second half of games.  Moving forward, I don’t have any problem taking Bryant as a top 10 wide receiver.  He seemed to assert himself as the primary wide receiver in Dallas about midway through the season over Miles Austin and never let go.  However, to draft the pace we got from his last 8 weeks over 16 – 134 receptions, 2196 yards and 18 touchdowns – would be a tad absurd to expect in 2013.  Of course, my projections below are going to be way too early given that much can change in the coming months but hey, you didn’t come here to read about 2012 stats and nothing else, right?  Let’s just all hope as 2013 owners he doesn’t do it all in the last 8 weeks again.