Over the course of the off-season we’ll be looking back at some of the major players who ‘broke out’ or outperformed their ADP by a drastic amount in the hopes that we can get a feel for what their 2013 fantasy football season holds and whether the break out is here to stay.  Today the review subject is James Jones. 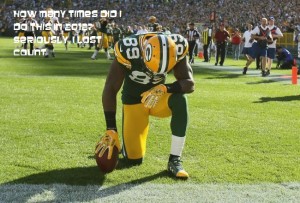 Welp, it finally happened.  After years of ‘James Jones, 20xx fantasy football sleeper’ posts and much gnashing of teeth, the fantasy football world was introduced to a top twenty wide receiver finish from James in 2012.  But much like Mickey Rourke’s career rebound we all have to ask ourselves ‘will it last’?  You see, it’s just downright hard to trust a player who scored 37% of his fantasy points in a PPR league off of touchdowns to repeat that feat in the following year, especially when they’re a wide receiver.  But let’s not get too far ahead of ourselves.  We have some evaluation to do before we kick this breakout season to the curb and call it dead.  So let’s see what happened in 2012 for James Jones and see what, if any, of it can translate to 2013 fantasy football…

Weeks 1-4: 16 rec, 23 targets, 191 receiving yards, 3 touchdowns, 45.1 total points – This was the start of a nice little touchdown run by James Jones that rolled into weeks 5 and 6 after scoring 2 touchdowns on New Orleans to round out the first four weeks.  Of course, his 4 catch 81 yard and 1 score performance against the 49ers to start the year was also nice but I’m sure anyone who owned him during this stretch didn’t know when to start him.  He followed up his great game against SF with negative yardage and 2 catches against an equally intimidating Bears defense.  In this 4 game span, 39.9% of his fantasy points were scored via touchdown.

Weeks 5-9: 20 rec, 33 targets, 210 receiving yards, 4 touchdowns, 55 total points – This was a great stretch of the season for Jones during these 4 weeks as he scored a minimum of 8 points in all 4 games and had the previously mentioned multi-touchdown streak from weeks 4 thru 6.  To no one’s surprise, a huge assist to Jones’ emergence is Greg Jennings going down with injury in week 4 to start this string of success.  During this span, 43.5% of Jones’ fantasy relevance hinges on two weeks that had a combined 4 touchdowns.

Weeks 10-13: 8 rec, 13 targets, 134 receiving yards, 2 touchdowns, 29.4 total points – The injury imp got to Jones in week 11 vs Detroit which cut short his week then and he didn’t play in week 12 so we’re really looking at 2 1/2 games of production here.  Again, the percentage of touchdowns as fantasy points is high for James in this string as well, accounting for 40.8% of his points.

Weeks 14-17: 20 rec, 29 targets, 249 receiving yards, 5 touchdowns, 64.9 total points – Clearly, Jones ended the season well posting his biggest 4 week fantasy output on the year.  Even with his no-show against the Lions, Jones averaged 16.225 fantasy points per game in this stretch which – if done over a full season – would’ve put him as a low-end WR1 for total points.  Again, touchdowns were the big thing here as James scored a whopping 46.2% of his fantasy points off of his 5 touchdowns.

Conclusion: I’m surprised to say this but I’m actually torn here and before you scoff, let’s look over the positives (the touchdowns) that I called negatives and see if we can put a positive spin on them.  It’s not like we haven’t seen a wide receiver score a lot of touchdowns for Green Bay in the past seemingly out of nowhere.  We only have to go back to 2011 and Jordy Nelson’s fine 15 touchdown season to prove that.  So James averaging almost a touchdown a game isn’t a crazy thing in and of itself, especially when you consider the talent at QB for the Packers.  Also factor in that Greg Jennings is now a Viking in 2013, there is room for optimism concerning Jones to provide decent value in 2013 even without any improvement on his part.  I think the only thing that’ll keep me from drafting Jones this year will be how many fantasy schmucks who draft him in 2013 because of his 2012 numbers.  Touchdowns, much like your girlfriend during that special time of the month, are fickle.  If you don’t believe me, just ask owners of Johnson and Johnson.  No not the company, Calvin and Andre as they combined for 9 touchdowns on the year.  All this to say, I think Jones can repeat most of his numbers in 2013 but I wouldn’t bet that he comes close to the touchdowns even if it was with your money.  There’s good value here in 2013 if it falls to you, I just have big doubts it will.