Over the course of the off-season we’ll be looking back at some of the major players who ‘broke out’ or outperformed their ADP by a drastic amount in the hopes that we can get a feel for what their 2013 fantasy football season holds and whether the break out is here to stay.  Today the review subject is Kyle Rudolph. 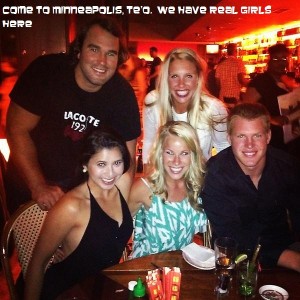 There were a lot of breakout Tight Ends in 2012 – Dennis Pitta and Heath Miller come to mind – but I don’t know if I will be covering all of them so I wanted to highlight a guy we talked about in pre-season as a 2012 fantasy sleeper in Kyle Rudolph.  Kyle finished tied for second for touchdowns scored on the year among tight ends with Jimmy Graham and only 1 ahead of Heath.  However, Kyle played the whole season unlike the other two so I’m going to say he really finished 4th.  But outside of the touchdowns, there was still plenty to like about Rudolph’s season and also plenty to hate.  With that let’s take a look back on his 2012 break out season and see how it holds up for 2013 fantasy football…

Weeks 1-4: 15 rec, 23 targets, 146 rec yards, 3 touchdowns, 40.1 total points – Rudolph really got off to a strong start in 2012, when he scored at least 9 points in his first three games with the crescendo one being a 2 touchdown performance against tough SF defense.  Of course, his 4 week was bordering on zero with only 2 catches for 8 yards.  I wish I weren’t about to write this nearly the exact same way 4 times but well…yeah.

Weeks 5-9: 12 rec, 24 targets, 96 rec yards, 2 touchdowns, 27.6 total points – Here’s where Kyle entered the dead zone for a little bit.  Though he more than made up for week 4’s paltry output with back-to-back games with a touchdown, he followed it up by dropping one of this three goose eggs on the season against the Cardinals.  Then made matters worse by turning a good matchup against the Buccs – a team that ranked 4th in points against for opposing TE – in a 2 catch, 17 yard effort.  The bloom of the start of the season started to wear off a little here.  It’s also good to note that the Cardinals game is the start of the Adrian Peterson end of season run.  AP would go on to average 159.8 yards per game over the final 10 games of the season which would have a huge effect on the passing game from then on out.

Weeks 10-13: 18 rec, 28 targets, 170 rec yards, 3 touchdowns, 44 total points – Oddly enough, the start to Rudolph’s best fantasy stretch of the season started with another of his goose eggs @SEA and probably led to him being sat or dropped in following weeks.  Of course, Percy Harvin went down during this game which led to 3 straight games with a touchdown and the most consistent stretch of the year.  However, it’s in his numbers during this span we start to notice a trend.  We notice that Rudolph becomes a third of Christian Ponder’s passing yardage (read: predictable) and that Ponder is only averaging 166 yards a game passing during that same time span.

Weeks 14-17: 8 rec, 18 targets, 81 rec yards, 1 touchdown, 18.1 total points – Clearly the predictability without Harvin in the lineup and the run-heavy offense led by AP’s run at Eric Dickerson’s record became a huge drawback for Kyle and his owners to finish out the year.  Kyle only had one more fantasy-worthy start to round out the year but given the tough slate – only Houston was a good matchup for opposing TEs and it’s the one he took advantage of – plus the aforementioned trends, it’s really hard to fault him too much.  Of course, that’s small consolation to anyone who started him during the playoffs.

Conclusion: Kyle’s going to need some help to build on this breakout season.  Christian Ponder needs to be a better quarterback overall.  Meanwhile, Greg Jennings needs to return to form and Cordarrelle Patterson needs to learn some of the intricacies of the game quickly.  Adrian Peterson’s skills should do more good than harm for Rudolph if Ponder can improve.  As it was, Kyle ranked high in a lot of key stats amongst Tight Ends: 5th for target percentages for his respective team (19.4%), tied for second for red zone targets (17), and was first in terms of red zone percentage targets for his team (28.3%).  All these numbers are a sign of someone who could and should be a top 5 Tight End for years to come if things can fall into place the right way.  Well I wish I could lie to you and say we’re seeing a sneak peak of things to come but I think we’re just seeing the peak if his team stays with Ponder.  Growth needs to come from QB, not TE for this Red-Nosed Viking so I can’t in good conscience push his 2013 numbers much higher than what we’ve seen.