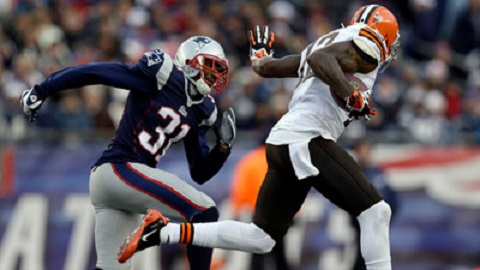 Don’t worry, I got five on it.

Despite pre-season nearly over and the media being inundated with “best shape of my life” stories and covering the on-going suicide watch of the Chiefs defense, there is one story, in particular, that was being watched closely by both the NFL and fantasy football fans alike. And that story was the Indianapolis Colts cutting LaVon Brazil after being suspended for the year after a second drug violation, while Jim Irsay, you know, does his thing. Oh, no, wait, that wasn’t it. The story being watched closely was Janay Rice’s apology for being knocked out and dragged unconscious on the floor by Ray Rice (to be fair, he only carried her two yards before falling down…), with the fallout of this incident being Rice suspended for two games. So I guess one game per one black eye is the going rate these days. Oh, wait, that’s not the story either. No, THE story which is under the NFL and fantasy sports nation’s microscope (it’s bedazzled, because, of course) is the status of Josh Gordon‘s appeal of his one year suspension. We can now all breathe easy and draft accordingly, for there has been a decision…

“More than three months after reports surfaced that the NFL was suspending Browns receiver Josh Gordon for a year for violating the substance abuse policy, the league upheld that suspension Tuesday.”

Once upon a time (before this whole mess), I had this crazy notion about ranking Josh Gordon ahead of Calvin Johnson, and as ludicrous as it might have been (especially now), it wasn’t so long ago that I could have made a strong argument before you tried to snap me back to reality. Remember, Calvin Johnson had 84 receptions, 1,492 yards, and 12 touchdowns in 2013. Josh Gordon had 87 reception 1,646 yards, and 9 touchdowns. At the very least, he was your WR2 off the board and a probably top-10 pick. Now? Not so much.

“Last year’s league-leading wideout has waited for word on his future since the second day of May’s draft, when we first learned that Gordon faced a potentially lengthy suspension for a positive drug test. Gordon was also suspended two games by the league last year for violating the substance abuse policy.”

Because I like tooting my own horn, unless we’re talking sexually, then that’s your job, I want to say that there’s been at least one person that’s been writing about how you have to trade Gordon, you have to draft not-Gordon… you basically have to stay away from everything Gordon. Jim Gordon? Let Batman deal with him. Gordan Gekko? He’s a jerk. That one person, if you hadn’t guessed yet, was me, since I only read the things I write. Really helps build a wide consensus, so says my ego. Regardless, on the off chance that someone was an optimist in this world (LOL), you might have been able to feed off of that and rid yourself of the risk, and if you were the optimist, well, remember, the world hates you.

Even in terms of dynasty leagues, there’s still risk here. Whether or not you believe marijuana should be legalized or not, there are other behavior issues at play here, and Gordon has shown little regards in abiding by the rules set forth. And that’s probably Obama’s fault. High risk, high reward? Certainly. But to overwhelm you with metaphors, is the juice worth the squeeze? No, not really, and because of that, I’m happy to stay far away from Josh Gordon and, you know, all the other Gordon’s from here on out.