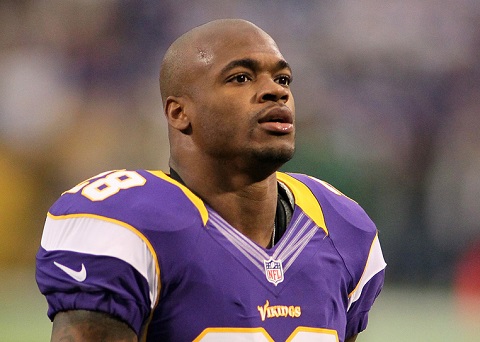 Did he beat his kid until he was purple? Jesus.

So, as if there hasn’t been enough negative news going around these parts, apparently, the Vikings running back wishes to keep the dominoes going. In other news, thanks for making me hungry for pizza too. Ya jerk.

Vikings running back Adrian Peterson has been indicted on charges of child injury in Texas, according to multiple reports.

According to MyFOXHouston, the charges are for “reckless or negligent injury to a child.”

Child Protective Services confirms to TMZ they are working on a case involving Peterson and an 11-year-old boy.

Jay Glazer of FOX Sports reports that Peterson has been cooperating with investigators. Glazer adds that the indictment means Peterson will have to turn himself in, leaving his status for this weekend in jeopardy.

While it’s sometimes hard to accept that human beings can be sh*tty, if these chargers turn out to be true, it would add another player to the list that really makes watching football harder than it is, and to be honest, I feel like there are about three or four more reports just waiting to see the light of day that will just cause the NFL to implode on itself. But, like all things, before passing judgement, we’ll have to wait until the dust settles. (Because let’s be honest, I was hit by things bigger than a switch when I was growing up…)

In terms of fantasy, everything is on hold at the moment as we await further news. As of now, keep him in your starting lineups until the last possible moment on Sunday or until we hear confirmation. In the meantime, I believe the handcuff here is Matt Asiata. I wouldn’t expect much here, but if your wire is thin and you are an unfortunate Peterson owner, he’s worth a speculative add. And while it’s easy to say that Peterson probably won’t start in Week 2, I also know that the process for these types of things have a way of being drawn out. I’m assuming he won’t start, but let’s see what happens.

One thing’s for sure… Christian Ponder’s kids are safe, because he can’t hit anything.

Update: The Vikings have deactivated Adrian Peterson for this Sunday’s game against the Patriots.

Oh, and if you were here just to see what’s going on with Josh Gordon, here you go:

Browns receiver Josh Gordon will have his suspension reduced from a season-long ban to 10 games once the new drug policy passes. The vote of the 32 NFL player reps is expected to take place today. Gordon will be suspended for 10 games, because it’s his fourth violation of the substance abuse policy.