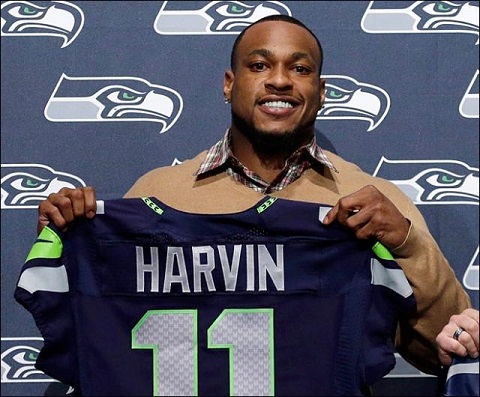 Hunh? Yeah, that was my exact reaction. And I would have typed this up sooner, but it’s Friday and my typing gets noticeably slower when there’s a drink in one hand, and a bottle in the other. But we all make sacrifices, especially for a story that will assuredly shock everyone… the Seattle Seahawks have agreed to trade Percy Harvin to the New York Jets for a 2015 conditional pick, which will range from a second-to-fourth round pick.

True, it hasn’t exactly been a productive year for Harvin with just 22 REC, 133 YDS and 11 CAR, 92 YDS, and 1 TD, of which said only touchdown was actually an officiating mistake, but you’d have to think he is still a dynamic offensive player on a team that utilizes such skills pretty well. Then again, we could also be nearing migraine season, tough to say here. It’s easy to assume that Pete Carroll might have done this to shake things up on a Super Bowl winning team that only has two losses, which would seem exactly the type of over-reaction you’d expect from him. Also, he’s pretty crazy, so there’s that.

In terms of fantasy value, Percy Harvin seems to be an amazing match with the Jets, if only because now he can run the Jet Sweep (or would it be the Jet Jet Sweep?), something I’m sure NFL commentators will gush over time and time again. But beyond that, you’d have to think going from a still-strong contender (despite what the Seattle fanbase is crying about nowadays) to a team that can’t get out of it’s own way falling in the standings hole, would be a downgrade in all facets. If you are a Harvin owner right now, well, that sucks. If you aren’t and were thinking of this as a buy-low opportunity, well, I guess? It’d have to be pretty low. I mean, overtaking Eric Decker as the most relevant wide receiver on that team isn’t really saying much. It’s actually pretty depressing. In Seattle, Doug Baldwin becomes the de facto number one receiver, which isn’t saying much. In fact, I’m still waiting for someone to say they mixed up Harvin for Baldwin. But I’ve always been a bit lower on the offense, not that they can’t score points, but there just isn’t much volume in the air attack. Marshawn Lynch was already going to get more carries, if you believe the Seahawks coaching staff, so the change there is probably minimal.

One great takeaway here is that I’d like to think the Jets included Chris Johnson in the deal and the Seahawks replied, “LOL, yeah, no, no. The conditional’s quite all right. Thanks.”