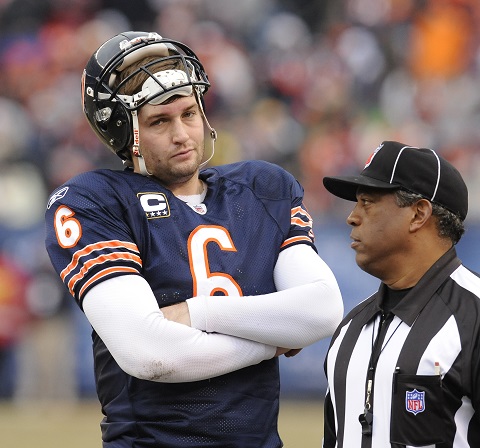 I absolutely, positively do not want to start Week 10 this way. But, it has to be done. I’m going to suggest Jay Cutler and there’s nothing you can do about it. Sure, it may seem like I’m scraping the bottom of the barrel here, but trust me on this one. Mr. Cavallari has a sweet, sweet match up this week at Tampa Bay and we should all be excited to cash in on this opportunity. The Buccaneers are giving up 20.9 points fantasy points per game (5th most in the league) to opposing quarterbacks and Cutler put up a respectable 14.3 points in his Week 8 return against the Vikings. That’s pretty impressive, especially when you consider that Minnesota has faced four QBs inside the top-12 this season and they haven’t allowed a 20 point day to any of them. In fact they haven’t allowed 20 points to any of the eight QBs they faced this season. Meanwhile, the Buccaneers were torched by Derek Carr (35 points) and Matt Ryan (24.3) in back-to-back weeks. Now, I realize that Cutler isn’t on the Carr/Ryan level, but Tampa Bay is averaging 281 passing yards allowed per week and they’ve handed out 18 passing scores so far this season. Both those numbers rank 27th and 30th in the league respectively. There’s a “better than good” chance that Cutler will have to go to the air early and often to keep up with Jameis Winston and company. So taking a chance on the rocket-arm of the former Santa Claus, Indiana resident might be in your best interest this week.

Here’s a look at a few more of my favorite passing and rushing match ups for Week 10:

Trevor Siemian – The good news here is that Gary Kubiak “Likes what Trevor is doing.” That’s great. Especially because he’s facing the Saints this week. That’s fantasy gold, my internet compadres. When it comes to passing yards allowed, New Orleans is the worst in the league in that department. They’re allowing 300 yards per game through the air and giving up 22.9 fantasy points to opposing QBs each week.

Aaron Rodgers – Over the last four weeks, Tennessee has allowed opposing quarterbacks to score 27.1 points per game and they’re allowing tight ends to cash in with 13.4 points per contest as well. Rodgers has been on fire recently, tossing 10 touchdowns against just one interception over his last three games.

Carson Wentz – Here’s the under the radar play of the week. The Falcons have given up at least three passing scores in six of their nine games this season and Wentz should have plenty of opportunities to chuck it as the O/U for this game currently sits at 50.

David Johnson – The 49ers rush defense is dead last in the league. In fact, they’re so bad they’re on an island all by themselves. San Francisco is giving up an incredible 193 yards per game on the ground and they’ve allowed 12 rushing scores as well. Opposing RBs have combined to score 43.1 points per week so far and that’s worst in the league by a wide margin.

Jordan Howard – Tampa Bay’s rush defense ranks 25th in the league in yards allowed (117.3) and they’ve given up 8 rushing scores through their first eight games this season. Howard has racked up three games of 100+ yards this year and he’s scampered for three runs of 20+ yards as well.

Chris Ivory – He put up 107 yards against a stout Kansas City defense last week, so the smart money is on Ivory to gash an already weak Texans’ rush defense. If he can just hold on to the ball with any consistency, Ivory should continue to see his role increase within the Jaguars’ offense.

Darren Sproles – Atlanta is 7th in the league in rushing yards allowed with 91.2 per game and they’ve allowed RBs to catch at least six passes in 8 of their 9 games this season. Atlanta’s also given up three receiving touchdowns to RBs this season so Sproles should be a solid play in all formats.

Mark Ingram – If last week’s breakout game didn’t restore your Ingram boner, then the match up against Denver’s baby soft run D should do the trick. Entering Week 10, the Broncos are giving up 128.6 rushing yards per game and they’ve handed out nine rushing scores over nine games played. Ingram should find plenty of running room against a unit that was gashed for 341 yards and two touchdowns over the last two games.