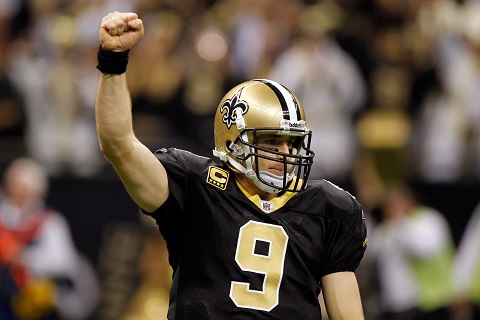 Welcome back to the Week 3 edition of By The Numbers. I’m writing this from one of my favorite cities on the entire world – New Orleans. In fact, I’m in a bit of a haze as I pen this. Maybe it was all the huffing, or quite possibly the hookers, who knows? Either way, The French Quarter never disappoints. After I’d had my fill of the “Vieux Carre” I was deep in thought as I traveled back to my humble Midwest estate. It came to my attention that the Saints were playing host to the Atlanta Falcons this week. If you’ve followed the numbers at all the past few years then you’re well aware that it doesn’t get much better than Drew Brees at home. Maybe he adds an extra dose of NyQuil into his lean on Saturday nights or Sean Payton really knows how to whip up some magic jambalaya. Whatever the case, he’s absolutely nails in the Mercedes-Benz Superdome. Over the past two seasons Brees has averaged 324 yards and 2.87 touchdowns per home game, while producing 292 yards and 1.87 touchdowns on the road. That extra production has helped New Orleans win 68.9% of their home games since 2010, while winning just 52.2% of road contests during that same period. This week he’ll feast on a weak Atlanta pass defense which allowed 299 yards through the air and three touchdowns to Derek Carr in Week 2. Two weeks ago this was the same group that yielded four touchdowns and 281 passing yards to Jameis Winston, while generating zero sacks. With just two weeks worth of data to sift through, Atlanta has already given up seven passing scores against zero interceptions. The Falcons are allowing the third most fantasy points (28.7) in the league to opposing QBs, 12th most fantasy points to WRs (24.9) and they’re ranked second-worst in the league in points allowed to opposing TEs (15.7). In other words…..They’re way below average. Whether you’re playing the daily game or season long fantasy (or both) you obviously want a piece of the Saints’ passing attack in you lineups if possible. Don’t let last weeks low scoring affair scare you away from Brees’ and his tiny hands. He was still able to complete 65 percent of his passes against the Giants and he dropped back 46 times in that contest. This is perhaps the most pass happy attack in the league – averaging 343 yards and 2.5 scores through the first two weeks this year. This game currently holds the highest O/U of the week at 53.5. Hopefully that excites you like it excites me. I currently have a Drew Brees rager you could hang a hat on. Anyway, remember to check out Jay’s rankings and Rudy’s “Pigskinator” to help you dominate your league. They’re without a doubt two of the best in the industry. Without further delay, here’s a look at some stats and facts that might help you win your matchups this week: