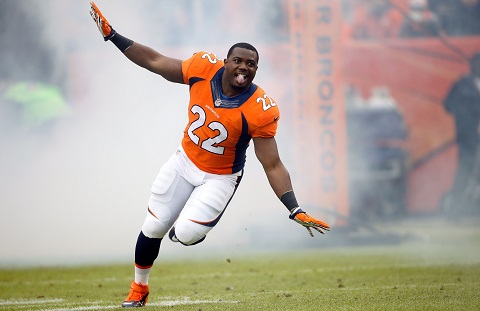 Oh hey, didn’t hear you come in. Sorry about the mess, I haven’t moved since last Sunday afternoon. I’ve been here crying in the fetal position and clutching my cold, empty Keenan Allen jersey. I’ll get by, no worries. But nonetheless, like the No.1 rated fantasy football player in the universe Barry Manilow once said “Looks Like We Made It.” Yes we did, Barry. Yes we did. Anyway, we’re into Week 2 of the fantasy season and I’m back to run you through some numbers that will identify some of the top passing and rushing matchups of the week. First let’s get the obvious play out of the way. C.J. Anderson will run roughshod over the Colts baby soft run defense. Being a Colts fan, that was difficult to type. But facts are facts and the gory number here is 122. That represents then number of rushing yards Indianapolis allowed per game last season. That was good enough to rank 25th in the league and they also handed out 14 rushing TDs over 16 games in 2015. Last week Detroit put up 116 yards on 24 carries and found the painted grass twice on the ground. Basically, we’ve seen this movie before and it never ends well for Fighting Pagano’s. Remember, the purpose of this article is just to touch on some of the better matchups of the week. Obviously if you own Cam or Aaron Rodgers – you’re starting them regardless of what is written here. This is not intended to be a rankings piece. Jay does a tremendous job each week with the site rankings, which you should obviously check out if you care about winning. Also, check out Rudy’s “Pigskinonator” for the best projections in the free world. That said, let’s jump into some numbers:

Carson Palmer –  Let’s forget about the ugly loss Sunday night at the hands of a short-staffed Patriots squad. I’m not here to judge short staffs. That’s a direct quote from my girlfriend back in college. Anyway, Palmer was more than adequate as far as numbers are concerned as he completed 17-of-19 passes under 10 yards. Palmer would go on to finish the game with 271 yards and two TDs and zero interceptions thrown. The Buccaneers allowed 241 yards passing yards per game in 2015, while giving up 31 touchdowns through the air. Don’t be fooled by the three sacks the Bucs generated vs the Falcons in Week 1 – Matt Ryan was still able to toss two TDs while completing 27-0f-39 passes for 322 yards.

Baltimore Ravens – Justin Forsett (10/41/0) and Terrance West (12/32/0) split the work almost right down the middle so it’s hard to distinguish who is the lead back in this situation. They’ll both have a busy Sunday facing the Browns and their generous rushing defense. Cleveland was gashed for 133 yards and a score and they were ranked 30th in the NFL in 2015, yielding 128 yards per contest with 11 rushing scores.

Joe Flacco – Normally, the thought of putting Flacco into play in anything but the deepest of leagues barely crosses my mind. After watching the Browns in Week 1 the former Fightin’ Blue Hen has the potential to move the needle in this weeks tilt. Cleveland allowed Carson Wentz to throw for 270 yards and two touchdowns – in his first start. Last season the Browns gave up 251 passing yards per contest (22nd in NFL) and allowed 34 passing scores, while forcing just 11 interceptions.

New York Giants – Rashad Jennings is the clear workhorse of this unit as he totaled 19 touches last week for 78 total yards. New Orleans was the 31st ranked rushing defense in 2015 allowing 12 scores and 129 yards per game. The picked up right where they left off in Week 1 giving up a 26/167/3 line to the Oakland backfield. One interesting item to watch this week is how the Giants will distribute their red zone touches. Last week they had nine opportunities in the red-zone; passing seven times and giving the only two carries to Shane Vereen.

Eli Manning – Anytime the New Orleans Saints are involved I’d like a share or two of the opposing offense. The last Manning standing deserves your attention this week. In Week 1, Manning was strong in the deep ball category – completing all four of his attempts of 20 yards or more for 103 yards and a score. This week he’ll face a Saints’ secondary that was gashed for 319 yards and a TD  along with two – two point conversions. Oh…..they’ll also be without Delvin Breaux, their top cornerback after he suffered a broken fibula. Manning did a great job of spreading around the work in Week 1 as five different players caught at least three passes. The offensive line was tremendous as well, allowing only five QB pressures the entire game.

Chicago Bears – Jeremy Langford dominated the work for the Bears last week, leaving no doubt he’s the back to own going forward. They’ll face the Eagles Sunday and cal me crazy, but I think their defense might be a tad bit overrated. I mean, yes…they did hold Cleveland to just 10 points. What’s going virtually unnoticed is the fact that Philly allowed a 21/120/1 line to the Browns backfield last week. This might be a good time to remind you that Philadelphia was dead last during 2015 in rushing yards allowed per game (134.6). So technically I guess you could say they’re better….but I want some of that Langford action in Week 2.

Derek Carr – I was hesitant to list Carr this week mostly because of how uncomfortable he looked when the Saints brought pressure against in Week 1. After watching a bit of the game on Red Zone, it was clear that he was probably upset about being referred to as “David Carr” several times. Last year the Falcons had trouble getting to the quarterback, generating only 19 sacks, which ranked last in the league. They were up to their old tricks against Tampa Bay in Week 1 as they allowed four passing scores without registering a single sack. Atlanta also ranked 18th in the league in passing yards allowed (247) during the 2015 season.

Dallas Cowboys – After what Pittsburgh did to the Redskins Monday night you should be feverishly placing not only Ezekiel Elliott into your lineup this week, but also considering Alfred Morris in deeper formats. The Steelers hung 147 yards and two scores on the Skins’ defense last week, which was worse than the 122 yards per contest they allowed in 2015. I expect Elliott to surpass the 20 carry mark for the second straight week and Morris to see at least 10-12 touches as well.