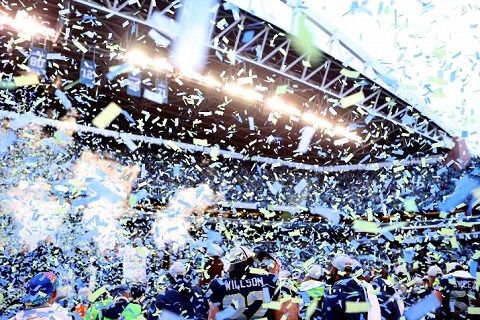 So, after taking a few days to wait for the dust cloud of Championship Sunday to clear, we now have our Super Bowl teams; the Seattle Seahawks and New England Patriots. And of course it wouldn’t be a Patriots appearance without the inevitable “something-gate” taking place (this time, deflate-gate, which sounds like a sexual maneuver by Gronk), but I doubt this type of thing comes as a surprise. Even if it did, I doubt it was the reason the Colts lost by 98 points and couldn’t tackle. But don’t worry folks, we have two weeks for the media to fill in empty space, and while a Packers/Patriots match-up might have provided a bonanza of narratives, the Packers made sure to try as hard as they possibly could to make sure that it didn’t happen. So here we are. The Seahawks and Patriots is, at least on paper, an intriguing match-up. True, the same could be said of last year’s game, but here’s hoping for a Super Bowl that’s at least entertaining till half-time…

Russell Wilson – 14/29, 209 YDS, 1 TD, 4 INT and 7 CAR, 25 YDS, 1 TD. Except for 49ers fans, I’m not quite sure why people hate Russell Wilson, unless they’re just hopeless misanthropes. (I.E. Cormac McCarthy.) I can do without all the bawling and praising Jesus for all these victories though. You should probably be thanking Marshawn Lynch a lot more.

Marshawn Lynch – 25 CAR, 157 YDS, 1 TD and 1 REC, 26 YDS. I blame the Hawks overall poor play on Lynch not being able to wear his gold shoes. But that last Seattle drive in regulation to take the lead… yeah, I’m going to go ahead and call it Mulholland Drive, because it was carried by Lynch and had a twist ending. He’ll be able to walk into any bar in Seattle for the rest of his life and find somebody who will hold his d*ck, that’s for damn sure.

Aaron Rodgers  – 19/34, 178 YDS, 1 TD, 2 INT and 1 CAR, 12 YDS. So when does Aaron Rodgers murder McCarthy and Capers? Granted, he missed his fair share of throws, but I’ve long been in the group that says McCarthy is a pretty terrible coach (along with Capers), and this game was classic to his core. Of course lucky for him, Brandon Bostick will be a handy scapegoat, even though that’s a pretty myopic way of doing things.