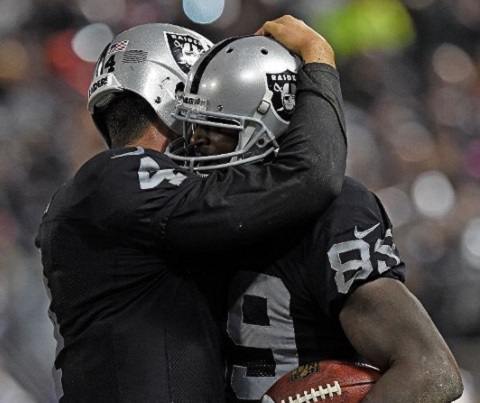 To totally honest with you folks, I really didn’t want to watch this game. From time-to-time, this happens. Mainly it’s whenever the Buccaneers, Jaguars, Washington’s Football Team… and the Raiders are involved. And the latter? Well, I don’t really have a choice in the matter. You see, if you hadn’t heard, I’m quite the Chargers fan, and I’m already forced to watch the Raiders twice a year, as if that wasn’t suffering enough. Why would I expose myself to more of this so-called “suffering”? There’s already enough suffering in the world. But I sh*t you not, the Raiders were part of the best Thursday Night Football game this year… And to think, I thought the only highlight last night was going to be seeing Andy Reid waddle around in his full red walrus gear. I just want to say this before we get to the recap… for the entire week, if you live in the immediate Oakland and Alameda County area, my advice to you is to stay indoors and lock your doors. In celebration, Raiders fans will be tipping over cars, burning anything that’s flammable, climbing on anything more than 10 feet high… pretty much duplicating a riot-like atmosphere. I mean, yeah, you’re right, they were going to do that even if they lost, or, you know, here and there during the boring parts of the offseason, or, probably whenever they felt like it, but this is their first win of the year… THIS HAS MEANING!

Derek Carr – 18/35, 174 YDS, 1 TD and 3 CAR, 2 YDS. If Derek Carr doesn’t become a legitimate NFL quarterback, no biggie. He’ll make a wonderful juggalo. I mean seriously… where can I get this eyeliner he’s wearing?

Latavius Murray – 4 CAR, 112 YDS, 2 TD. Last time I saw a Raider run like that, he was carrying a television… Left the game from concussion-like symptoms and did not return due to a helmet-to-helmet hit. It’s worth keeping an eye on, seeing as how he’s basically the only hope the Raiders have to ever establish a run game again.

Marcel Reese – 8 CAR, 37 YDS and 1 REC, 8 YDS. I think Reece is getting this many carries because McFadden and Drew aren’t very good. JUST A WILD GUESS.

Maurice Jones-Drew – 3 CAR, -1 YDS. Jones-Drew is still alive? Pretty sure MJD is next on the list to get buried.