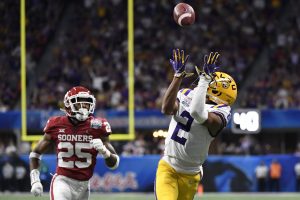 It is hard enough to pick the right fantasy WRs in a given season, even with years of NFL production under their belt. It is much more challenging to select a rookie to bolster your dynasty roster. Even with all the fantastic resources via Twitter, ranging from film junkies to data nerds, picking the next stud WR feels like a shot in the dark. There are some things we do know about college prospects that can guide us through these muddy waters:

I have cited articles above that have been meaningful to me by some amazing analysts from various sites. They have done great work and are leading the way in the fantasy community. I was curious to build on these established thresholds and see how we can all get better.

For this article, I started with a player pool from Peter Howard’s (@pahowdy) database. It has college production data for 657 NFL WRs drafted from 2001-2019. The data is not complete for every player, so I trimmed it to WRs drafted in 2007 or later who had their breakout age (MS >20%) listed. I then excluded NFL WRs with less than 1 reception per game in college because they are the extreme exception (Julian Edelman, Terrell Pryor, etc.). The final pool of WRs with college stats was 390 players deep.

When an article references “hits” and “misses” for WRs, they usually define a hit as at least one top 24 WR fantasy finish (WR2). This is certainly an accomplishment but as fantasy managers we need more. When drafting a rookie for our dynasty rosters, one WR2 season in a career isn’t going to win many championships. At the very least, a “hit” should be sustained WR2 production over a career.

I chose to record players with one WR2 season but also separate out players who I consider “hits.” To be a hit, a WR had to be a WR2 for >50% of his eligible NFL seasons. A miss was a WR who did not record one WR2 season between 2013-2019.

I used FantasyPros.com to find all the top 24 PPR WRs dating back to 2013.  Yes, I know above I said that my player pool was anyone drafted after 2007 so the data doesn’t perfectly overlap but I am working with what I can find. A WR drafted in 2007 entered his 7th year in 2013, well within the window to produce a top 24 season. A limitation is that I may have missed a WR who recorded multiple WR2 seasons between 2007-2013 but never did again. I’m sure there are cases like this but it’s likely a small number. Additionally, I categorized players who were a WR2 per eligible years in my sample. For example: Calvin Johnson only had 3 WR2 years in my sample but he was only eligible for 3 years, thus achieveing WR2 status in 100% of his seasons.

Among all WRs, 63 of 390 players analyzed had at least 1 year as a WR2, good for 16.2%. So, if you blindly chose a WR over this time period you’d have a 16.2% chance that player would have 1 WR2 season. More daunting is that only 31 (7.9%) WRs had WR2 seasons for half their eligible seasons in the sample. This is our baseline with no filters, and it shows that WR2s are not easy to find. Next, I wanted to see how BOA, 1-3 round draft capital and 1st round draft capital alone compared in predicting success. The results are below:

This table shows that of the metrics listed, the best single predictor of finding a WR2 is clearly just taking a WR who was drafted in the first round of the NFL draft. Unfortunately, that’s a pretty restrictive criteria and also one that most of your competition will instinctively follow. I was surprised to see that while it gets a lot of steam in the community, BOA alone is only slightly better than a blind pick from the entire pool (10.6% vs. 7.9%) in terms of landing a hit.

So, what other college metric can assist in identifying a future consistent WR2? I’m glad you asked! My process was simple: throw a bunch of stats against the wall to see what sticks. And after days of throwing, I found one.

One number that seemed to separate hits from misses was college career receptions per game (rpg). First I noticed that hits averaged a full1  rpg  more than misses over their collegiate career. Diving in further there was a severe difference between players who caught >4.6rpg vs those that caught <4.6rpg. When setting >4.6rpg as the only filter, it’s better at picking hits than BOA but not as good as 1-3 round draft capital. Conversely, not making the 4.6 rpg mark was devastating to a players chances to be a hit.

Eureka! By using these 3 criteria together, the eligible player pool almost doubles AND both the hit rate and miss rate improve! I think that this process can assist in narrowing down an entire class to focus on the handful of players that really should make an impact at the next level.

Of course, at this point we still are working with a 50% chance of picking a WR who will finish with 1 top 24 season and a 31% chance of selecting a consistent producer. This is where film study and more nuance can take over to refine the process even more. But I hope this is helpful to at least clear away some of the noise in any new crop of rookie WRs.

If I was a shock-analyst, I would have entitled this piece “Jerry Jeudy and CeeDee Lamb project to be NFL busts” since surprisingly neither of those two studs met the 4.6rpg mark. Frankly, I don’t know what to do with this piece of information. Jeudy’s excuse could be that Alabama beat teams so bad that he rarely played in the 4th quarter, thus his 4.4rpg could have easily met criteria if his team wasn’t so good.

CeeDee Lamb obviously initially played behind a stud in Marquise Brown, but I’m sure plenty of other WRs that met 4.6rpg did at some point as well. Not meeting 4.6rpg does not ensure a bust, but looking at these numbers it certainly doesn’t help. What both Jeudy and Lamb will have on their side is 1st round draft status which basically is its own successful metric.

Some lesser prospects that meet or exceed 4.6rpg and a <21yo BOA are –  Antonio Gandy-Golden, James Proche, Laviska Shenault Jr, Justin Jefferson (a personal favorite), Isaiah Hodgins (very intriguing), Tyler Johnson (yes), Byran Edwards (a thousand times yes), Denzel Mims, Lynn Bowden Jr, and Marquez Stevenson.  If any of these guys get drafted in the top 3 rounds, they are probably worth targeting in your rookie drafts.