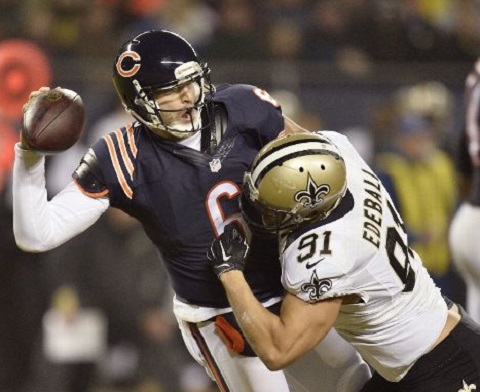 The continuing saga of the dumpster fire (outside an abortion clinic) known as the NFC South surely has captivated all of us here at Razzball (I’m pretty sure it’s about 78% of the content I’ve been producing the last month), and, what I would expect to be the entire nation. Some men just want to watch the world burn. And we are those men. And our world are the Saints (6-8), Panthers (5-8), Falcons (5-9), and the Buccaneers (2-12). Remember, this division features three teams vying for a playoff spot and four teams vying for a top-10 draft position. That doesn’t even seem mathematically possible. So with that in mind, what’s a better prime-time event than to pair up a team from this division to go against the hapless Bears? With an immensely disappointing year, Marc Trestman, Jay Cutler, and the Bears switch from the cover two to the cover none defensive scheme have all been at the center of blame. And yet, they would have been vying for a home playoff game last night if they were in the NFC South. I’m not sure if that should make them laugh or cry. While the game started out derpy, it soon settled into an ugly and boring one-sided game. Perhaps the perfect teaser for Thursday Night Football, which features the Titans and Jaguars. Which will make me feature Jameson in my mouth. More like whiskey-boarding, amiright folks?

Jimmy Graham – 5 REC, 87 YDS. Has anyone noticed that Jimmy Graham is pretty good at football? But what about basketball?