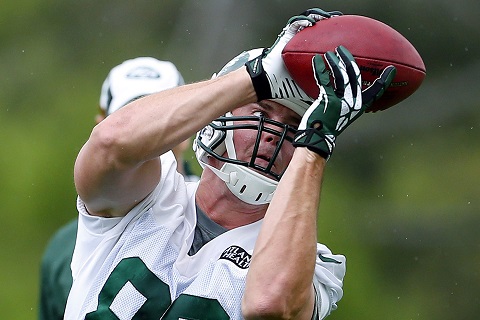 This represents the first article of a series we are referring to as “Deep Impact”, where we at Razzball will examine players who are tucked away deep in the player projections and are bound to surpass their underwhelming expectations. The benefit of these players – aside from showing off your fantasy football prowess – is that they are often available on your fantasy league waiver wire and they can provide relief to fantasy owners looking for quality talent in deeper formats. So without further ado, let us begin with New York Jets Tight End Jace Amaro.

Amaro is a rookie this season after being drafted by the Jets with the 17th pick in the 2nd round from Texas Tech. Prior to being drafted, he was a highly touted prospect primarily because of his abilities as a receiver. Unfortunately, however, he was also widely considered a raw prospect at tight end, particularly as an in-line blocker. Additionally, his route-running and timing appeared to need polishing as well. Yet, in the end, his speed and ability to catch the ball in traffic were undeniable and Amaro ultimately became the Jets second-round draft pick in 2014.

With that in mind, it’s easy to understand how so many analysts are overlooking Amaro as a viable option at tight end in fantasy football this season. Obviously making matters worse, offseason acquisition Michael Vick failed to bring any real competition to the Jets lackluster quarterback group, leaving incumbent Geno Smith as the starter.

Looking around in New York, it almost appears to be the land receiving options forgot. Veteran Santonio Holmes has moved on and even former second-round draft pick Stephen Hill was released by the organization. That leaves recently acquired free agent receiver Eric Decker as the only legitimate option for coordinators to game plan for outside the Jets loaded backfield. Or does it?

So far this preseason has shown flashes of promise between Smith and Amaro. In limited action throughout the Jets first three preseason games, Amaro caught 8 passes for 79 yards and a touchdown. Of his eight receptions, five went for first downs as well, making Amaro a solid intermediate option for the Jets offense. Of course, it’s hard to project exactly how he will be used once the regular season gets underway, but Amaro is a player you should be cautiously aware of. With the lack of receiving options in New York, the young man from Texas Tech could get off to a hot start and never look back.

Owners who are looking for a potential backup tight end with tremendous upside, Jace Amaro could be your guy. His value is substantially higher in PPR or 2 tight end formats, not to mention Dynasty and Keeper leagues as well. At this point, Amaro is owned in only 2% of Yahoo fantasy leagues and is projected as the 1925 best player, but could be the second-best receiving option for the Jets this season. You do the math.