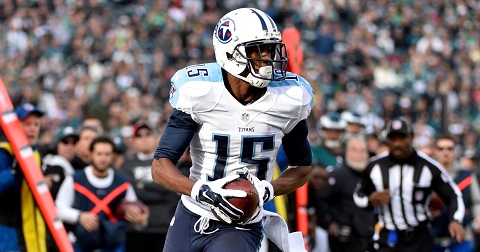 Welcome everybody to this week’s edition of Deep Impact! This is an important week, dear readers. For many of you, it is one last shot to lock up a first round bye or sneak into the playoffs and pray for a Giants-like romp to the championship. For many others, this will be your last week of fantasy football for the season, as your failed early round picks of Brandon Marshall or Rob Gronkowski (What idiot would have ever suggested those picks? Please don’t look at my preseason articles) give you another reason besides seasonal affective disorder to go see a therapist this winter. To those jumping off the metaphorical train after this week: don’t jump off anything literally, it’s going to be ok. Go book that therapy appointment, and thanks for reading along this season. To people gearing up for the playoffs, let’s take a look at the under 10% owned population and figure out what unearthed gem can take you to the Promised Land.

Justin Hunter or Marquise Goodwin (WRs, Buffalo Bills, 0% and 5% owned, respectively) – The Bills receiving corps has been hit hard all season, but especially in the past couple weeks. Sammy Watkins is back on the field, but the offensive coordinator disclosed that his foot is still broken, and I wonder how much run he’ll get (he saw 45% of snaps last week). Robert Woods is still not practicing with a knee injury and Percy Harvin is dealing with the migraine issue that forced him into early retirement to begin with. Goodwin, who stands to gain the most extra looks as a result of all these injuries, left practice early on Thursday after hurting his wrist. There isn’t any word on the severity of the injury, but if he’s able to play this week he’s worth a flier. If he doesn’t, at this point the Bills might need to see if Andre Reed is in game shape. The rest of the guys at the depth chart (Hunter, Brandon Tate, Walt Powell, and something called Dezmin Lewis) leave a lot to be desired, but I would roll the dice on Hunter of this group. He’s already carved out a red zone role for himself (he leads the team in receiving touchdowns with four, despite only having seven catches), and the Bills’ own site ran a story earlier in the week saying that Rex Ryan thinks Hunter deserves a bigger role in the offense. Add all that up, and I’d bet on Hunter if the rest of the group is out of action.

Dorial Green-Beckham (WR, Philadelphia Eagles, 5% owned) – Trying to predict which Eagles receiver is going to step up this season next to Jordan Matthews feels like playing Russian roulette, unless you’re an Eagles fan, in which case I imagine you’d rather just take the gun and fully load it before playing. I recommended DGB as a stash earlier in the season, and he responded with a whole bunch of nothing until the past two weeks, in which he’s totaled 11 grabs for 136 yards and a touchdown. With Nelson Agholor potentially being a healthy scratch for back to back weeks, and Matthews dealing with an ankle injury, DGB is in a position to stay on the fantasy radar. I think the Eagles are likely to try establishing the run a little more this week after getting away from it too early last week, but when they throw, they don’t have many better options right now than Green-Beckham.

Rex Burkhead (RB, Cincinnati Bengals, 5% owned) – I mentioned Rex last week so I’ll keep this one brief. Last week he got five carries and two catches for 48 total yards, and I doubt he’ll see much more or less this week. If you’re in a league deep enough where getting 6-8 touches is worth playing, you aren’t going to find anything better on the wire with ownership this low.

Shane Vereen (RB, New York Giants, 3% owned) – Vereen returned to the practice field on Wednesday and is eligible to return from the IR, although he isn’t expected to do so until next week. The Giants have been getting pitiful production from Rashad Jennings and Paul Perkins (ranking 31st in the league in rushing), and there is no reason why Vereen can’t resume his prior role as pass-catching once he’s ready to play. Given that he isn’t recovering from a leg injury, I feel better about his potential to have an impact in the fantasy playoffs. If you’re in a PPR league and someone cut bait, I’d snatch him up now since he could be a popular add sooner than later.