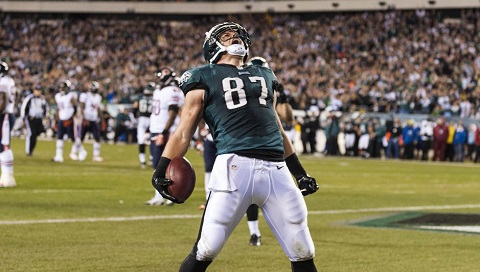 Welcome back everybody to this week’s edition of “Deep Implants”, our recurring series here at Razzball discussing the history of American spies planted overseas during war. This week, we’ll take a look at the exploits of Edward Bancroft, a Massachusetts-born scholar who was a key provider of intelligence from London to Ben Franklin during the Revolutionary War. Before diving into his espionage, let’s start with his studies that showed eels use electricity to capture their prey… *answers call from Jay* I’ve been informed that this is actually another installment of Deep Impact, and also that BANCROFT WAS A DOUBLE AGENT THE WHOLE TIME! NO, BEN FRANKLIN, STOP GIVING THIS MAN INFORMATION!!! As a refresher for those of you who missed the first regular season piece in this series, this is for fantasy football players who like to hang out in the deep end. Metaphorically speaking, of course; I don’t go into the actual deep end as I’m not a strong swimmer and the kids are really judgmental these days. Floaties are for adults too, dammit!

Before we get into it, allow me a moment to get on a soapbox and share some palindrome-based guidance that you nervous nellies out there seem to need based on the comments I’ve been seeing on articles across the site: Week one is one week. People out there asking whether they should drop Gio Bernard, Matt Jones, or any other early pick, remember that you wouldn’t be asking if the player in question had a bad week midseason. It’s just one data point that scares you more because it’s the only data point you have so far. And sure, maybe the bad week is a true red flag that you should lower expectations, but avoid any panic moves. Feel free to churn the fringe of your roster to get rid of Week 1 underperformers (Kenny Stills would be catching my glare right now if he could catch anything at all) for Week 1 stars. But hang onto your main guys who had a rough start to the season, chances are it’s a blip in what will otherwise be a productive year. Especially in deep formats, you can’t afford to make such short-sighted decisions. Now, let’s get into same names. We’ll continue to look for guys below 10% owned in Yahoo (I don’t bother searching ESPN’s ownership figures because ESPN is for amateurs) for people to start or stash in Week 2.

Chris Thompson (RB, Washington Redskins, 4% owned) – I highlighted this guy last week (and nailed it!) so I won’t spend much more on him here, just wanted to include him since he is still so low-owned and is the only running back I see below the 10% mark that I would consider putting in a lineup this week. Thompson was on the field for 67% of the team’s snaps last week vs. 33% for nominal starter Matt Jones, and while that was in large part due to the game flow (Thompson is the pass catching back and the Redskins spent most of the game playing from behind), I do think he’ll get 10-15 touches a game going forward. I don’t understand how his ownership percentage is behind Buck Allen, who was a healthy scratch last week, but the world has thrown us crazier mysteries before, like Stonehenge, or magnets. Anyways, since I gave you this name last week, I’ll give you a bonus stash this week. Deal? Deal.

Cole Beasley (WR, Dallas Cowboys, 9% owned) – Only four guys in the league had more targets than Beasley’s 11 last week (Allen Robinson, Jordan Matthews, A.J. Green, Jason Witten), and a fifth if you count all the targets Cam Newton’s helmet received in the season opener. Now, do I think that the Cowboys will continue throwing the ball to Beasley twice as much as to Dez Bryant (5 targets)? Not if they’d like to get a win at any point this year. But, defenses are going to throw everything they can at Dez in the passing game and dare one of the other receivers to beat them, and Beasley is good enough in the slot to make them pay. Plus, with a young QB (and a risk-averse offensive scheme as a result), I expect both Beasley and Witten to remain heavily used as safety valves this week against a Washington defense that doesn’t have anyone good other than Josh Norman in coverage. Especially in PPR formats, Beasley is a solid play.

Brent Celek (TE, Philadelphia Eagles, 4% owned) – Celek is five years removed from being fantasy relevant any format, and caught his only target last week as his teammate and popular breakout pick Zach Ertz caught six balls for 58 yards. So why is he on this list? Because Ertz has a displaced rib, which I’m told isn’t what it’s called when you accidentally leave your plate too close to your fat uncle at the family barbecue. That’s just a misplaced rib. Ertz is week-to-week as a result, and Celek is the only fully healthy option left on the depth chart as backup Trey Burton missed Week 1 with a calf injury. Burton could be active and involved this week, but Celek will be on the field most every play, and will provide rookie QB and Midwest heartthrob Carson Wentz with a safety valve for his first game against a real NFL team this season. Sorry Carson, I know you had a good debut, but any stats accumulated against the Browns are asterisked per official Pro Football Hall of Fame rules. This week will be on the road against the Bears, which is a stiffer challenge, but not one that scares me away from starting any Eagles skill positions. If you need help at tight end this week, party like its 2011 and pick Celek up.

D.J. Foster (RB/WR, New England Patriots, 1% owned) – Jonas Gray. Dion Lewis. Brandon Bolden. James White. The list goes on. The amount of New England Patriots running backs that have come out of nowhere to contribute the past few seasons is slightly greater than the amount of words Bill Belichick uses in an average press conference. So yeah, Foster is an undrafted rookie free agent, and yeah, he wasn’t active for the first game. But his path to contributing in 2016 got a lot clearer with Dion Lewis and Tyler Gaffney being injured, and his running/receiving skill set is something that Belichick can have some fun with out of the backfield (plus gives Yahoo owners some rare position flexibility). If James White goes down, Foster gets plugged right in. Hell, if James White is late to a practice, Foster could take his looks. At some point this season, he’s going to get on the field and make an impact. If you’ve got a deep enough bench, snag him now and wait for Belichick’s inevitable running back fickleness to settle in.

Travaris Cadet (RB, New Orleans Saints, 2% owned) – Cadet has moved out of training and into the role C.J. Spiller was brought in last season to fill: pass catching back in an offense that loves to throw. Spiller was a healthy scratch for opening week, and was released shortly after. Meanwhile, Cadet was on the field for 38% of the team’s snaps last week (26 total, only three less than starter Mark Ingram, and 16 more than backup Tim Hightower). If you’re handcuffing Ingram, Hightower is still the play, but Cadet will have an every week role and could give you some solid PPR value. His stat line of three catches for 14 yards was far from impressive, but he got in the end zone, and the seven targets tell you that he could be in line for good utilization the rest of the way. Somehow, Spiller’s ownership is still twice as high as Cadet’s, I’ll be very disappointed in all of you if that’s still the case by the end of the week.