Here are the matchups for defenses for the remainder of the fantasy season.  I tried many different ways to quantify which teams would be the ripest for defenses to humiliate and destroy, but most of the time the numbers seemed skewed because of one big game against.  San Diego and New Orleans both fit into that category.  Both have had big fantasy defensive games against them, but I wouldn’t want to play a D/ST against them. Anyway, I cherry picked my stats enough to come up with five teams I think are worth playing your Ds against.  The five worst teams against fantasy defenses in the last 5 weeks are — Dallas, Minnesota, Washington, Carolina and Arizona.  So I highlighted those teams here, which may help you plan a streaming attack.

Before we get to the streamegery make sure you join our FanDuel leagues.  We still need 10 competitors for the last 2 leagues — League Two and League Three. 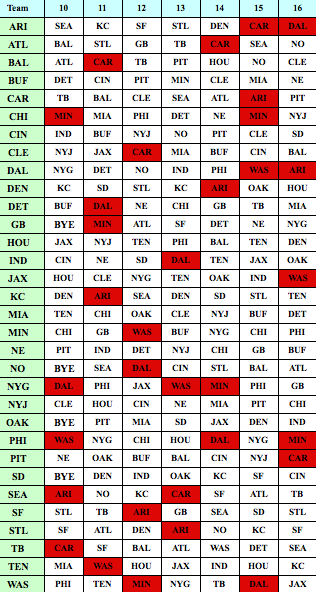