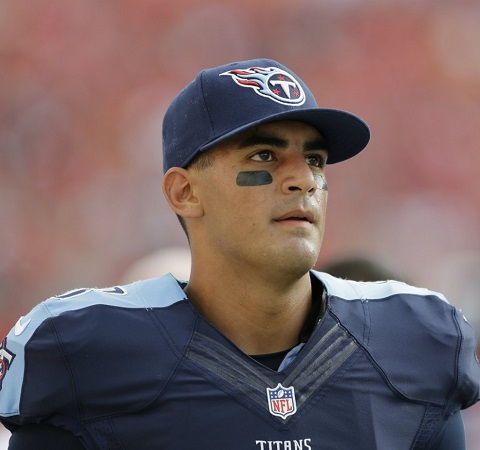 Greetings! I come to you, live from the waterbed of a vixen, freshly slain, lying next to me, quivering in a frothing pool of sweat after I gave her the Lord’s chalice. What a week I’ve had my good men, I tell ya! It’s good to be back in the saddle, as I feel like this post brought me back closer to my roots. It has nothing to do with the fact this woman just sucked the life out of me and spat it on my back, or maybe it’s the fact I doubled my Wellbutrin, but either way, I’m thinking I’m back!

Players who will Delight their Lord in Week 3

Marcus Mariota – The Oakland Raiders are 31st against the pass, meaning, in laymen terms, that they’re purely the opossum pissed on gutter trash of of NFL’s secondaries. It’s quite the conundrum when considering the fact that Reggie McKenzie blew a blue whale load into revamping that secondary this past offseason. I do not love this Titans receiving core. No, the word “love” does not describe it at all. I suppose the proper word would be: Hate. Anyway, I challenged the testicular fortitude of Mariota this past Sunday, but he stuck his wang out and made sang out, dropping two second half touchdown passes, and leading his team to victory in the mean streets of Detroit. If you didn’t understand anything I was just writing about, it translates as such: The Raiders have a horrid secondary, so there’s s fairly solid chance Mariota has a decent game. Got it? Cool beans…

Melvin Gordon – The Indianapolis Colts are softer than an Armadillo belly, and have have now been for quite some time. Gordon’s testes seem to have dropped and fully formed this summer, as the young man has been outstanding, from the preseason to two weeks through the season. I’m impressed, but I’m not easily impressed. But, sometimes, I’m impressed a great deal. The 15th overall pick of the 2015 draft didn’t even once sniff pay-dirt during his rookie year. He’s already more than tripled his previous career high, and should see a ton of work this week as the Chargers are scrambling to find replacements for Woodhead.

Christine Michael – Thomas Rawls looks slower and more out sync than Roseanne before she snorts her morning Adderall, and Micahel is reaping all the benefits. This in turn, of course, helps us to reap as well. Michael looked he got greased up in Crisco and shot out of a trebuchet, every time he bursts through the line of scrimmage. Young Rawls needs to earn his job back, not have it given to him. Words from old and wise Lord Beddict… San Francisco is 24th in the NFL against the run, allowing, “The Fozz,” to run wild on that hide last week, just imagine what Christina might do.

Julio Jones – The New Orleans “Taints” as locals are beginning to refer to them as, have had their top two corners go down these past two weeks, leaving Larry, Moe, and Curly to attempt to defend the Elder blessed, most magnanimous of the magnificent, Julio Jones. Even with a cracked ankle and one nut, Jones is more than capable of breaking an NFL record this upcoming Monday night. You heard it here first.

Tajae Sharpe – I believe I mentioned the fact that the Titans are facing the seemingly perpetually putrid Oakland Raiders secondary. Sharpe is due like for touchdown reception like Angelina Jolie is due for anther divorce…..what? When did that happen? Call it a hunch or maybe just label it as an Elder God promise, but Sharpe crosses that line that leads into the section you are awarded six points for entering, and does a little dance for his Uncle Beddict. Shake it for me, Papi.

Travis Kelce – At one point in time, the Jets had one of the best secondaries in the NFL. Well, at one point in time I died my pubic hair pink and had my buns waxed on a bi-weekly basis, but so what? That’s just not the case anymore as Tygod dropped a couple of missiles on their heads, a week after the Red hot pocket dropped a trescientos on em, showing myself, Lord Beddict, and the world they’re secondary is beatable. Not just beatable, but bend over, spit on it, and drill it type of beatable. Kelce finds the end zone this week. Take a picture of this prediction and put in your bedside table drawer, you know, the one where your wife keeps her massive collection of vibrators and butt plugs since you can’t make her splouge, and lock it away until Sunday evening, and re-read this treasure chest of knowledge.

Players who will Disgrace their Lord in Week 3

Cody Kessler : I solemnly swear, as your chosen liege Lord, that USC’s Cody Kessler shall never make it, as even a mediocre starting QB in this league. If this so happens to be untrue, retire from fantasy sports writing, I must. Deal, my goodmen? Allriiiiiighty then, if my calculations are correct, the Browns have about an 64.89 percent chance of losing at home to the Miami Dolphins this weekend, taking them to 0-3 on the season. Can this city ever catch a break? Oh, that’s right, the Cavs just had the greatest NBA finals in NBA history, destroying the minds and souls of every Warriors fan on the planet. The city that produced great men like Drew Carey and…and…um, anyway will be back under the tutelage of Hue Jackson, just not in 2016. Drew Carey truly is the most famous person to come out of Cleveland. Honestly. Iconic.

Jacoby Brisset – That Houston Texans defense is filthier than Bea Arthur’s pampers after an all you can eat Teppanyaki dinner. You know how them shrimp be. Once you pop, you can’t stop. Anyway, With the Texans defense looking lethal on all three levels of the defense, one would assume the rookie, Brisset, much like Christian Slater at any movie audition in the past 18 years, will struggle mightily. The Patriots have panned the countryside, scouring the earth for the world’s finest white receiving core, and, my goodmen, they’ve succeeded in the sort of fashion that brings blessings from the Gods for multiple generations. But they will struggle with the rookie at the helm. You’ve got to be realistic about these things.

LeGarrette Blount – I’m assuming you’re thinking that since the Patriots are starting a rookie QB, that they’ll lean on the run game like an inebriated Lindsay Lohan, but, then again, I’m also assuming you’re not thinking deeply enough and that you need guidance. We’ve seen this a trillion times; We think it’s a game Blount gets 25 carries, and he gets six. It’s basically a forgone conclusion he get’s five or less carries, and he comes away with 40 for 230 and three tubs. The Texans defense is going roll Blount up… Wait, you haven’t heard this one, have you? Either way, you know how this story goes. Or do you? Sh*t, mother, I can’t dance.

Jerrick McKinnon – I’m as large as a McKinnon fan there is. Not literally, I’m actually in pretty good shape (ha ha ha……errrrrr). That being said, I’ve been on this train one too many times. Not the train where the entire cheerleading team of my softball team road me like Seattle Slew, but the one where I get excited about McKinnon and then Asiata, the great brown Buffalo, scores with more ruthless frequency than Herpes in Paris Hilton’s Jacuzzi tub.

Golden Tate – Last week, Tate managed to pull in two of nine targets for an astounding 13 yards against a Titans secondary that I wouldn’t recognize the faces of if we sat together in a gondola for seven hours on the clearest day possible. The Packers secondary has been pretty solid, but dislike Tate even more if Sam Shields is back. Stay updated on the injury report by following Anna Nicole Smith and my Twitter immediately.

John Brown – I drafted Brown in a few leagues this year, almost by accident, and turned out to be the second worst accident of my career. A child from the putrid womb of a woman I allegedly impregnated in a Turkish bathhouse actually had the cajones to make an attempt on my life.  At least he showed effort and made me aware of his presence. I cannot state the same about John Brown.

Jack Doyle – As a Dwayne Allen owner and fan, I find in infuriatingly difficult to fathom the reason for Jack Doyle’s being on this football team. Okaaaaay, the dude is solid, but, still I’m confused as to why Allen is not in on all passing downs? All I ask is that you let the big dog eat first. Aiiiight? Let Poppa D.A. get his protein in before you get the leftovers, ok, O’Doyle? Wit cho punk ass.

Thank you for joining me for another edition of Disgrace/Delight. As per usual I will be responding to all questions and comments below, so please feel free to drop me a line. Ciao.