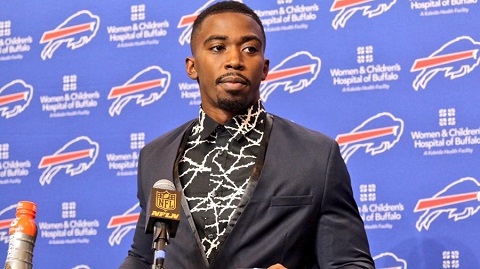 Greetings! To both my loyal subjects and sacrilegious haters, I humbly welcome you my life; ‘Tis true, my life revolves around the fascinating world of fantasy sports, but it’s so much deeper than that. Here, at the world’s finest fantasy sports website, Razzball, I’m able to share with you lessons of love and ecstasy, tales of heartbreak and betrayal, and possibly even some insight as to why Richard Gere enjoyed gerbils up his rectum. I cannot lie to you, my goodmen, my life is in absolute shambles right now. I cannot remember a time I felt so overwhelmed, yet I shall rise up and do my lordly duty, for I, Lord Beddict, am meant for greatness in some form or another and I shan’t be denied. WITNESS!

Players the Lord Believes will Delight in Week 1:

Tyrod Taylor – I’d be lying to myself and all of you fine people if I didn’t mention the fact that Tygod is going to go Green Eggs and HAM on the aging and toothless defense of the Baltimore Ravens. Being the most dangerous two-way threat in all of the land is a heavy burden for any man to carry, but the Rodfather could carry 500 pounds of hate in his fanny pack and still run for 80-plus on these peasants. I’m expecting a top-10 performance.

Robert Griffin III – Both the Eagles cornerbacks were signed out of a D-level Cheesesteak house from the Southside of Philly this offseason, so I’m buying a big day for the second-chance-at-life having, RG3. By no means am I expecting some top-five performance. What I am expecting is a solid showing and someone to consider as both a cheap DFS play and a definite two-QB format start.

Raiders Skill Position Players – When in doubt, wear a condom. When in doubt about who to start in fantasy football, you start every possible starter against the Saints defense. Latavius Murray, Michael Crabtree, Amari Cooper and even Clive Walford all need to be considered this week as this Saints defense is softer than a jellyfish d*ck.

Seahawks Skill Position Players – I’m assuming you recall the lovely Pamela Anderson deep-throating Tommy Lee on that fancy yacht a decade or two ago? Well, that’s exactly how the Dolphins are going to take the Seahawks offense in Week 1. The only gag reflex will be coming from Dolphins fans nationwide. Trust in the Lord.

Spencer Ware – With Jamaal Charles out for a little while, Ware should receive either equal or more carries than Charcandrick West. I happen to prefer Ware’s skillset against a Chargers defense, who I wouldn’t trust if my life depended on it. West received some goal line work last season, but Ware has proven to be an absolute mauler and if they can’t figure that out, and they make me look the part of the fool, I shall never forgive Andy Reid.

Carlos Hyde – In what should be a close game, Hyde should receive 20-plus carries and three-to-five receptions against an overrated Rams defense. The Rams linebacker core is soft against the run, so there’s some nice potential for a big-time game here. I’m with him.

Ameer Abdullah – When playing the Colts, especially when their defense is more worthless and decimated than usual, one must go with the RB with game breaking ability in both the run and pass game. That, my goodmen, is like unleashing a wolf in a hen house. Make sure you have a rag handy to wipe up all the blood from this slaughter.

Terrelle Pryor – Let’s be real, nobody is starting Pryor this week… only, you should. I’m expecting six-to-eight targets and at least one touchdown. This masculine savage has finally mastered the receiver position and as I expected, many teams are going to regret passing up the chance to grab him when they had the chance. A star is born.

Players the Lord believes will Disgrace in Week 1:

Sam Bradford – Say one thing for Sam Bradford, he’s positively the most overvalued QB in NFL history. Why do teams keep wanting a piece of this fraud? He’s like Jeff George without the incredible arm. For the love of the Gods, he doesn’t even look like football player, much less an athlete. I was never a fan of Bradford, even when coming out of college. I just didn’t see it. Not that I’m always correct, or even close to it, but I just never saw what was so special about this guy. It’s a disgrace that Nic Cage and Christian Slater have to blow studio execs just to read for an audition, but Bradford keeps being handed starting QB jobs. It’s absolutely disgusting.

Jay Ajayi – There is absolutely nothing special here. Don’t believe what anyone tells you. The fact that the injury prone, 45-year old running back Arian Foster easily beat this guy out is telling enough. Nothing more to say here.

Ryan Tannehill – Tanny should improve under Gase, but with Parker out and facing the swarming Seattle Seahawks defense, Tannehill is in for a rough day. I’d expect multiple picks and probably a fumble on top of that. Not the week to start him. That is, unless you imagine you’d enjoy grabbing your ankles and being plugged by a scud missile.

Marcus Mariota – Facing an extremely talented Vikings defense, I expect the Titans to be extremely run oriented this week, and really every week for that matter. There’s some upside here but I’d stay away.

Jeremy Langford – I’m higher on Langford than almost anyone but I’m not feeling this matchup in any way. Let’s just stay positive and remember that Langford will be a solid option going forward. Just not in Week 1.

Thank you for joining me for my first edition of Disgrace/Delight. Until then, find someone you love and hold them close, for you never know when they will be ripped from your grasp. You’ve got to be realistic about these things. Football is back!